A Courtroom Suicide: On the Vulnerability of Legal Theatre

Half a year after the ICTY formally dissolved, this post reflects on the theatricality of an unexpected event that shook the Tribunal's foundations in its very last week: the courtroom suicide of Slobodan Praljak.

On December 31, 2017, after 24 years of investigations and prosecutions, the International Criminal Tribunal for the former Yugoslavia (ICTY) formally dissolved. The Tribunal had held its last hearings in late November and leaves the few remaining appeal procedures to the UN residual mechanism for criminal tribunals. The ICTY has been a pivotal institution in the development of the legal question of individual responsibility for what are called ‘international crimes,’ that is, war crimes, genocide, and crimes against humanity.

In the process of its closing, since 2010, the ICTY organized a conference series on the question what will be its legacy – one of the ways in which the institution has been careful in managing its public perception. But in the final week of hearings the Tribunal was confronted with an unexpected event, one that shook the Tribunal’s foundations and was very public at that: the courtroom suicide of Slobodan Praljak. In this blogpost I will consider his act in the context of my research interest: the theatricality of criminal trials.

The ICTY Courthouse in The Hague

The highlight of the closing hearings would otherwise surely have been the sentencing hearing in the case of Ratko Mladić. The man also known as ‘the Butcher of Bosnia’ was held accountable for genocide, amongst other charges, especially in relation to the Srebrenica massacre, and his case was considered one of the Tribunal’s most important successes. The trial was broadcast in full on Dutch television, and, given Mladić’s misbehavior, and Judge Orie’s firm response, it made for some impressive ‘Court TV’.

Video of Mladić’s misbehaviour in court

Another set of images, however, would come to dominate news reports in the Tribunal’s final weeks. If you checked any kind of news service around that time (29 November 2017), at least one image will most probably not have escaped you: 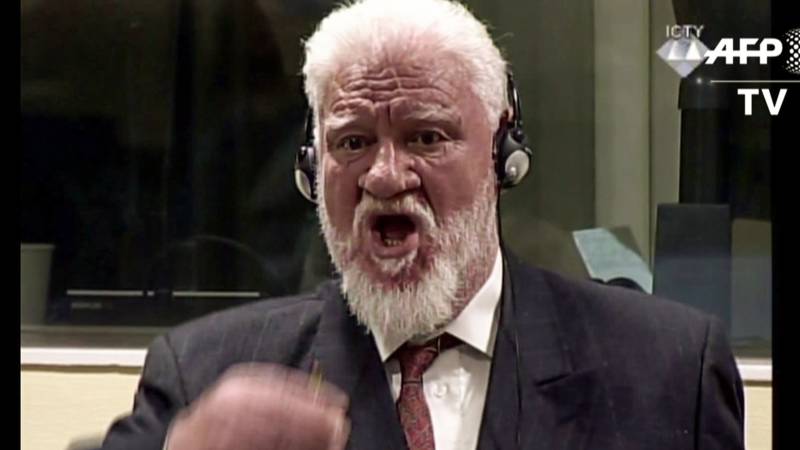 This screenshot from the court’s live video stream was taken during the Tribunal’s very last hearing. Seconds after the judge announced the decision to reject his appeal case and uphold his sentence, Slobodan Praljak, a former Bosnian Croat general, committed suicide in the courtroom by drinking a vial of potassium cyanide after exclaiming, “Judges, Slobodan Praljak is not a war criminal. With disdain, I reject your verdict!”

How to make sense of this radical act of self-annihilation in the ICTY’s courtroom? What can it tell us about the institution that is now to be judged? In light of my research, I was immediately intrigued by the dramatic quality of Praljak’s act. In this post I will reflect on the theatricality of the ICTY and Praljak's suicide; I leave some thoughts on the act in the context of the politics of international law for a later post.

The courtroom is often compared to the theatre and legal events to theatrical performances.[1] If we say that the trial is a performance, a theatrical display of legal power, the ICTY carefully crafted a stage for the display of the rule of law it stands for. And it did so rather successfully, many feel, through its attention to procedural correctness, to slowness and meticulousness over sensation. In that context, by ‘theatrical’ I do not mean something overly dramatic or spectacular, but rather something staged: a performance in the sense of ‘twice-behaved behavior,’ that is, a form of acting that comes into being through repetition and rehearsal. 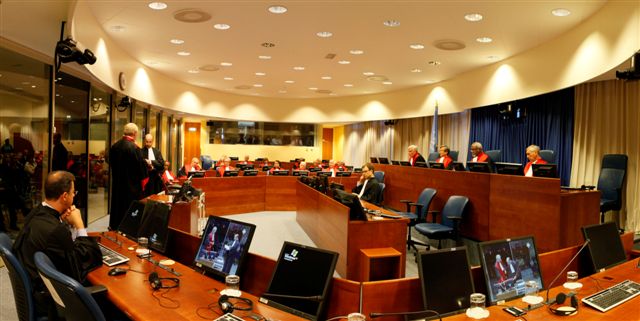 Screenshot of one of the ICTY’s courtrooms

In relation to this theatricality, I would say that by enacting suicide, Praljak radically disturbed the courtroom show. Like Mladić the week before him, Praljak refused to follow his stage directions and play the obedient subject he was supposed to play. But unlike Mladić’s misbehavior, which judge Orie managed in such a way that the institution appeared powerful and controlled, Praljak’s suicide was beyond the possibility of management; it was absolute in the way that it defied any kind of response. No intervention from the judges would have been able to undo or overrule the swallowing of poison and the death it would inevitably lead to. The act was radically dramatic – in the literal sense of ‘drama,’ ‘to act’ – in that it could not be ‘twice-behaved,’ it could not have been rehearsed. Death happens only once; it is ‘behaved’ only ever for the first time.

The judge’s intuitive reaction was telling, then: instead of first calling for medical assistance, he asked for the curtains to be closed – that is, the curtains which hang in front of the windows that separate the audience from the courtroom. (I wasn’t watching at the time, but I assume that the semi-live broadcast the Tribunal streams on its website was interrupted as well. See this link for a post I wrote about the ICC’s live stream). Mladić was removed from the Courtroom, and thus removed from the audience’s sight for the case to reconvene after a short adjournment. In Praljak’s case, however, the entire courtroom was veiled. 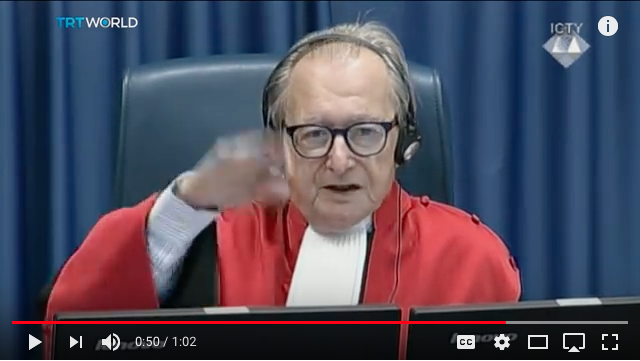 What was it that needed to be kept from the public’s eye?

Although for a long time the theatre was seen as a mimetic art form, one purely concerned with imitation, modern theatre scholars have pointed out that there is a corporeal dimension to theatre that opens up the mimesis to the reality it claims to represent.[2] Contemporary theatre reflects, for example, on the fact that a stage presents both characters and actors simultaneously, that is, both real bodies speaking, gesturing, and moving, and the characters these bodies represent. Similarly, plays experiment with the contiguity that exists between the actors and the audience, with the fact that they share the same physical space.

Trials, too, can be seen as mimetic events in that they consist of the representation of a case. Through processing a case and bringing it to a verdict trials represent the law. The trial – to put it simply – performs the reinstitution of the law after it has been broken in a crime by representing that crime in the terms of the law it reinstitutes. That representation, however, much like a play, is mediated through real bodies. The judges, lawyers, and the accused, gesture, move, and speak, and thus they are at the same time representational, i.e. of the law, and real, in that they are physically present. The courtroom audience, too, shares the same physical space that the officials do (except, of course, in the case of televised or streamed proceedings). 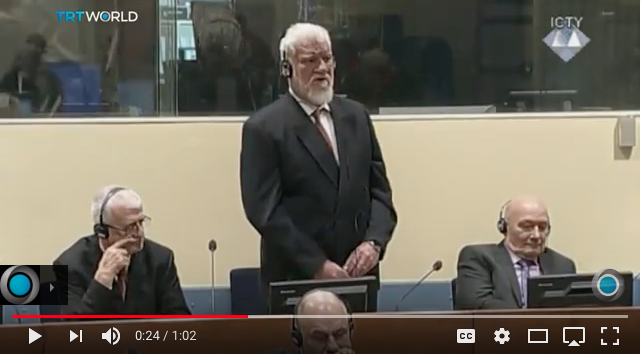 Praljak, upon hearing his verdict

Praljak’s suicide powerfully demonstrated why this corporeal understanding of the trial matters. The physical reality of the legal procedure makes it vulnerable to disruptive interventions at a level that the court officials cannot respond to, at least to the extent that they represent the law. In the specific case of Praljak’s suicide, his intervention took the form of the annihilation of the body of the accused; a body the Tribunal needed to be alive, so as to be able to subject it to the punishment established in the verdict and thereby fully exercise its jurisdiction. This simple physical fact made it impossible to close Praljak’s case, which had been carefully built over the course of twelve years. No matter how strong a court case may seem legally, it has a material side that makes it vulnerable in a way that is beyond the logic of law.

As Freud noted in his essay, “Thoughts for the Times on War and Death”, no one ever really dies in a play, as it would radically disturb the mimetic logic. When Praljak committed suicide upon hearing the verdict in his appeal case, he radically disturbed the mimetic logic of the ICTY's theatre. As such, his act pointed us to the other dimension of law’s theatricality: the fact that it is constituted by real, and therefore vulnerable, bodies.

[1]See, amongst many others, but as a good example Julie Stone Peters essay ‘Law as Performance’ in Elizabeth Anker and Bernadette Meyler (ed.), New Directions in Law and Literature, Oxford: Oxford University Press, 2017.