The sea marked a boundary both real and imagined in Tokugawa Japan (1615– 1868). Contact with sea creatures was mainly in the form of food, however, sea creatures were also envisioned as curious objects which captured people’s imagination.

The sea marked a boundary both real and imagined in Tokugawa Japan (1615– 1868). Having imposed a policy of closed ports in 1635, the Tokugawa Shogunate stopped sending sea-worthy vessels on trade missions and otherwise. Going out to open sea was impossible for the vast majority of Japanese people in the eighteenth century and for much of the first half of the nineteenth century. Apart from fisher folk, people’s contact with sea creatures was mainly in the form of food and useful products such as medicine. The popular Illustrated Guide to the Famous Products of Land and Sea in Japan (Nippon Sankai Meisan Zue), reprinted multiple times in the first half of the nineteenth century, depicts whaling as a local famous custom, highlighting the usefulness of whales among other things coming from the sea for the local economy.

However, sea creatures were also envisioned beyond their practical use as curious objects of unusual shape, size and appearance, which captured people’s imagination. Money could be made from this. A whale that had stranded in Shinagawa River in the Shogun’s capital of Edo, present-day Tokyo, in 1798, was probably presented to the Shogun before being returned to sea. In Osaka, the rotting corpse of a whale was displayed in a curiosity show in 1823. It attracted major attention because few people had encountered a giant sea mammal on land. Well into the Meiji Period (1868–1912), stories of strange fish washing up on the shores of the Japanese archipelago were circulated in local newspapers. The reports included sketches and later also photographs reproducing their uncanny features resembling snakes or human faces.

Apart from eliciting curiosity and some measure of horror, knowledge could be gained from such images, too. Although only remotely based on direct observation, popular prints depicting strange creatures, including foreigners, exotic animals and imported objects, sometimes had labels giving the creature’s name, features and place of origin. Makers of popular prints in Nagasaki, the port city where curious things from outside Japan invariably landed first as this was the only port open to selected foreign vessels, produced such images for travellers to take home as souvenirs. Nagasaki was also renowned as a place where painters possessed the technical skills to prove the existence of the strange. Having some training in Western descriptive techniques and some access to Chinese and Western books, these painters were able to capture the actual appearance of objects.

These painters were patronised by Japanese people with an interest in Western and Chinese learning, and by members of the Dutch East India Company. The German physician Philipp Franz von Siebold (1796–1866), responsible for collecting botanical, zoological, and geological specimens of Japan for the company, commissioned painters such as Kawahara Keiga (1786–1860) to faithfully capture aspects of Japanese life, nature and industry. His interest in pictures was mainly as sources of useful information. All the manuscripts and books assembled in this section of the exhibition were collected or commissioned by him. Despite the practical purpose of these materials, they nevertheless contain vivid images of sea creatures, which give fascinating testimony to the global circulation of knowledge in the first half of the nineteenth century.

The manuscripts entitled Various Kinds of Crustacean Drawn from Life (Kaikarui Shashin) (6.1-2 and 6.5-7) and Various Fish Drawn from Life (Gyorui Shashin) (6.8) were both illustrated by Kurimoto Zuiken (1756–1834), a Japanese physician specialising in pharmaceutics who was in the service of the Shogun in Edo, present-day Tokyo. Siebold recorded in his diary that Zuiken showed him illustrations of plants, fish and shells in 1826. At the time, Siebold was staying in Edo as a member of the Dutch trade mission visiting the Shogun’s court. Both manuscripts render the sea creatures including crustaceans, sharks and selected deep sea fish in bright colours, giving a sense of their three-dimensionality. Zuiken also gives the creatures a sense of realness with facial expressions that make them appear alive. 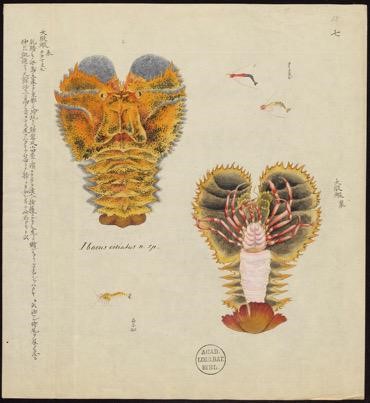 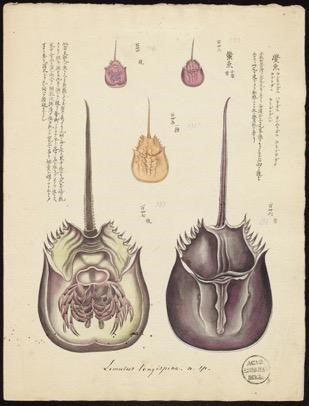 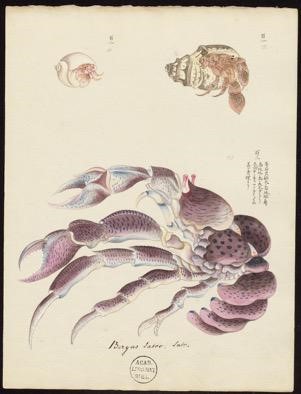 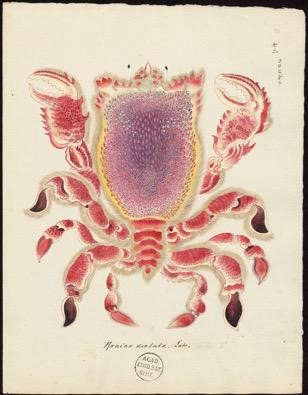 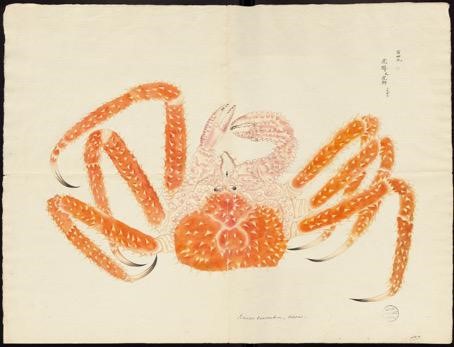 Siebold had each illustration numbered and the Japanese captions translated in a separate manuscript, which is now in an incomplete state. The Japanese captions highlight the ability of the picture to capture the real appearance of the fish. For example, one illustration (6.8) depicts four varieties of shark, including a shark (tenguzame) resembling a long-nosed goblin on the top left page. According to the inscription, the image does not capture the actual colours of this shark as it was sketched from a dried specimen in the middle of summer in 1817 in Sesshū Province in Western Japan. Such attention to linking the picture with historical reality shows a scholarly concern for authenticity. The expression ‘capturing the real’ (shashin), which appears in the manuscript titles, meant that an image was useful as a source of information about real-life objects. It did not specify a single method of production. In practice, painters rarely observed directly from nature but adapted existing pictures or fabricated images. 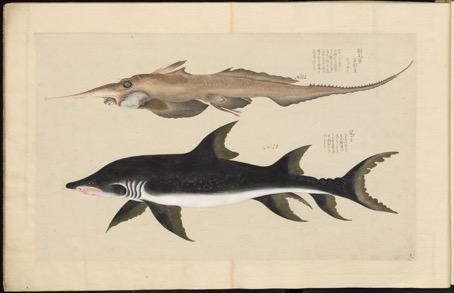 A 1794 printed edition of Whale Chronicle (Geishi) (6.3) describes various whale species based on the author’s direct observations of whaling practices in the Kumano region of Kii Domain in Western Japan. The original manuscript was written in 1758 and printed in 1760 by Kandoriya Ji’emon (also called Kajitoriya Ji’emon or Yamase Harumasa), a chemist and scholar of herbalism from Kii Domain. He had directly observed whaling practices and questioned fishermen about their knowledge of whales. While fishermen were the sources of some of the information in the book, they were not the intended audience. The book was more than merely a description of whaling practices. It focused on the whales themselves, providing an overview of their varying forms. When the book was printed in 1794, it was aimed at the scholarly community and written in Sino-Japanese (kanbun). 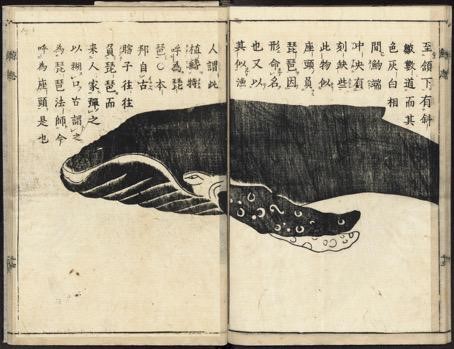 Although printed in monochrome black, the illustrations of whales in this book capture the varying size, forms and shades of different whale species. In fact, the illustrations were detailed enough to leave a legacy in later illustrations of the drawn-from-life variety: The horizontal scroll entitled Illustrations of Giant Whales Drawn from Life (Shashin Chōgei no zu) (6.4) depicts various whale species based on selections from Geishi. It is possible that Siebold who purchased a printed edition of Geishi, also commissioned this scroll. The whales are depicted alive and moving against a mainly empty background. 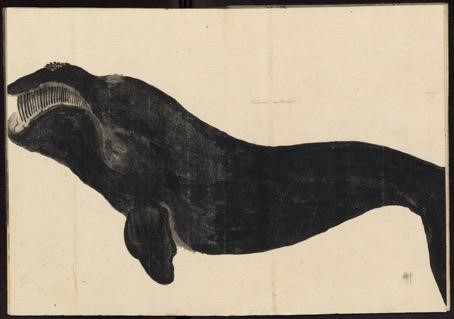 The labelling of these images as ‘capturing the real’ shows that shashin was a flexible concept encompassing multiple routes of transmission. However, there was some stylistic distinction between images intended for studying nature and images describing nature as a resource for human industry. The Illustrated Guide to the Famous Products of Land and See in Japan belongs to the latter type. It contains illustrations depicting whales being caught by fishermen. The painter, Hasegawa Mitsunobu, wanted to contrast the extraordinary size of the whale with the minute figures of the fishermen. He did this by showing an enormous plume of water emerging from the whale’s breathing hole. Apart from this, the whale does not resist capture, allowing the fishermen to display the skills of their trade.

However, even popular illustrated guides did not always fabricate nature in genre scenes celebrating human industry. As the order of the natural world became a focus of enquiry in the nineteenth century, guide books started to include new images that encouraged empirical learning. In addition, nature was not the only target of empirical learning; historical texts were also examined for the origins of common names. The Illustrated Guide to the Famous Products of Land and See in Japan shows how diverse scholarly interests intersected. About ten pages of this book are dedicated to describing fish called kajika, literally ‘river deer’. Citing historical sources, the text explains how kajika came to denote both a river frog and a type of fish with a large head and small fins. The frogs had acquired this name because their calls evoked the sound of deer. The naming of the fish is more complicated, but of interest here is the use of pictures describing various fish by that same name across the Japanese archipelago. The illustrations allow the reader to compare their slightly differing forms together with captions describing their origin and features.

Pictures of fish acquired new meanings as aids to empirical studies of nature and history in nineteenth-century Japan. The methods used to produce these pictures included direct observation, copying and fabrication. This increasing interest in producing knowledge about nature was further encouraged by interactions with the Dutch East India Company, an influential player in the global circulation of knowledge.

Marcon F., The Knowledge of Nature and the Nature of Knowledge in Early Modern Japan, Chicago, University of Chicago Press, 2015.