From Far. Fish and Marine exotica from the East- and West-Indies

As European trading companies circumnavigated the globe, over the course of the seventeenth century cabinets of curiosities began to include more specimens from faraway places, such as flying fish or gigantic jellyfish.

The Leiden Arts in Society Blog is dedicating a week to fishes and to the exhibition Fish & Fiction which is currently on view at the Leiden University Library. The exhibition is a collaboration between the library and the LUCAS project A New History of Fishes. A long-term approach to fishes in science and culture, 1550-1880. The researchers of this project published a catalogue providing a theoretical background, from which we share content this week. The catalogue: Fish & Fiction. Aquatic Animals between Science and Imagination (1500–1900) can be purchased at the reception desk of the Leiden University Library.
Marine exotica embellished cabinets of curiosities from the fifteenth and sixteenth centuries onwards. Over the course of the seventeenth century, however, collections began to include more and more specimens from faraway places. This was in large part the result of the rise of European trading companies that circumnavigated the globe driven by commercial interests. The acquisition of sugar, spices and slaves was the main objective of these journeys. In the wake of this European expansion came civil servants and physicians who scoured regions hitherto unknown to them to study the natural surroundings and to collect, describe and picture plants and animals. Already on their way to these faraway places, seafarers could spot all kinds of marine creatures that piqued their interest, such as flying fish or gigantic jellyfish.
As we have seen in the previous chapter, aquatic objects were coveted collectables and prized possessions. Objects from faraway places could add extra cachet to a collection. The Delft physician and burgomaster Henrick d’Acquet (1632–1709), for example, boasted an impressive collection that included plants and animals from the East and West-Indies. All the way from Ambon in Indonesia, for example, he received a fair share of marine creatures such as lobsters, sea horses and sea shells (4.1-3). D’Acquet had these and other specimens in his cabinet drawn by artists: the resulting manuscript is a beautiful testimony to his rich collection as well as his wide-ranging connections. 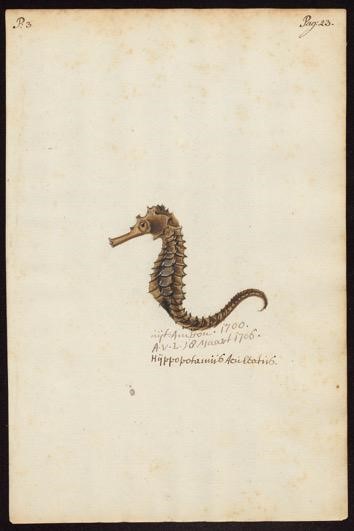 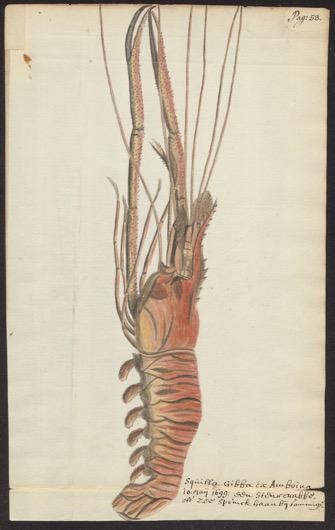 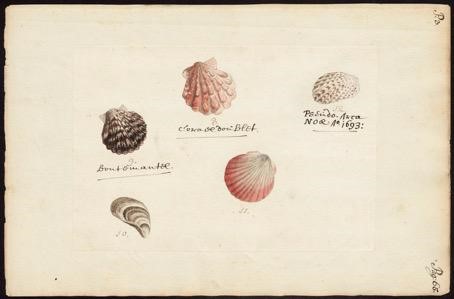 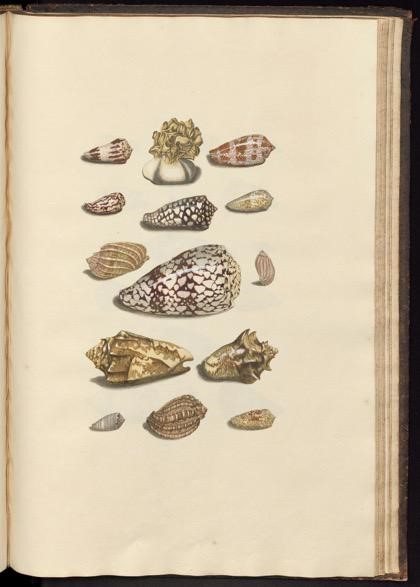 His research was not without hardships. His wife, who helped him translate his texts from Latin into Dutch, was killed in an earthquake in 1674 and a decade later his library and a part of his manuscripts including illustrations were lost in a fire. Undeterred, Rumphius continued his work and managed to complete a manuscript for publication. After getting his manuscript safely to Batavia, the ship that was to carry this manuscript to be printed in The Netherlands was sunk in 1692 – luckily, there were spare copies. Rumphius had by then gone blind (4.5). He continued studying natural history, however, earning him the nickname of ‘the blind seer of Ambon’ (4.6). His book on shells and crustaceans, entitled D’Amboinsche rariteitkamer (Amsterdam, 1705), was eventually published and was dedicated to the aforementioned Henrick d’Acquet. 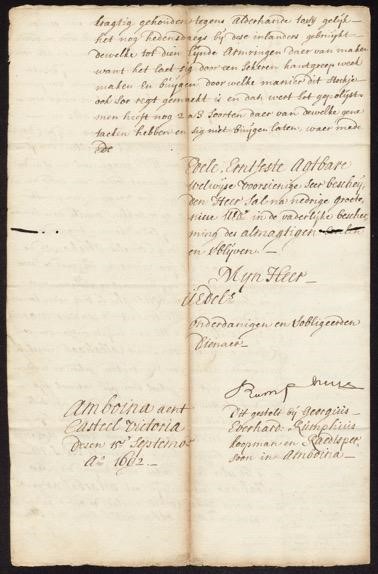 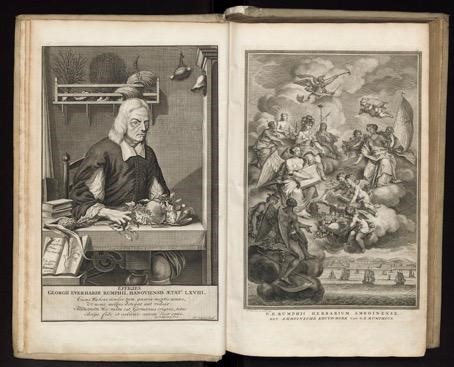 The West-Indies too were the subject of European investigation. One of the leading works on Brazilian flora and fauna was the Historia naturalis Brasiliae (Leiden and Amsterdam, 1648) published by Georg Marcgraf (1610–1644) and Willem Piso (1611–1678). They travelled to the north-eastern provinces of Brazil in the service of Johann Maurits von Naussau-Siegen who had been made the governor-general of this Dutch colony. Marcgraf combined cartographical and mathematical expertise, whereas Piso had been appointed court physician. They embarked on writing a natural history of the Brazilian provinces which they inspected on behalf of Johann Maurits and the resulting book remained an influential account of the natural history of Brazil for a long time.
A part of this book was devoted to the fishes that swam in the Brazilian rivers, seas and streams. Marcgraf enlisted the service of fishermen to get their hands on these fishes, and the knowledge of the local Tupi informants proved to be essential in obtaining certain information. The names that the native population gave to these species were included in the book. The knowledge of local informants was also vital in knowing which species were safe to eat or not. Marcgraf, together with Albert Eckhout and Zacharias Wagener, made watercolours, which served as models for woodcuts made later to accompany the species descriptions. Some copies of the Historia naturalis Brasiliae were coloured in by artists on the basis of the watercolours made in Brazil, making the dazzling hues of these fish species visible (4.7). Capturing these vibrant colours was not an easy process: in these hot and moist climates, fish decomposed easily so that time was of the essence. 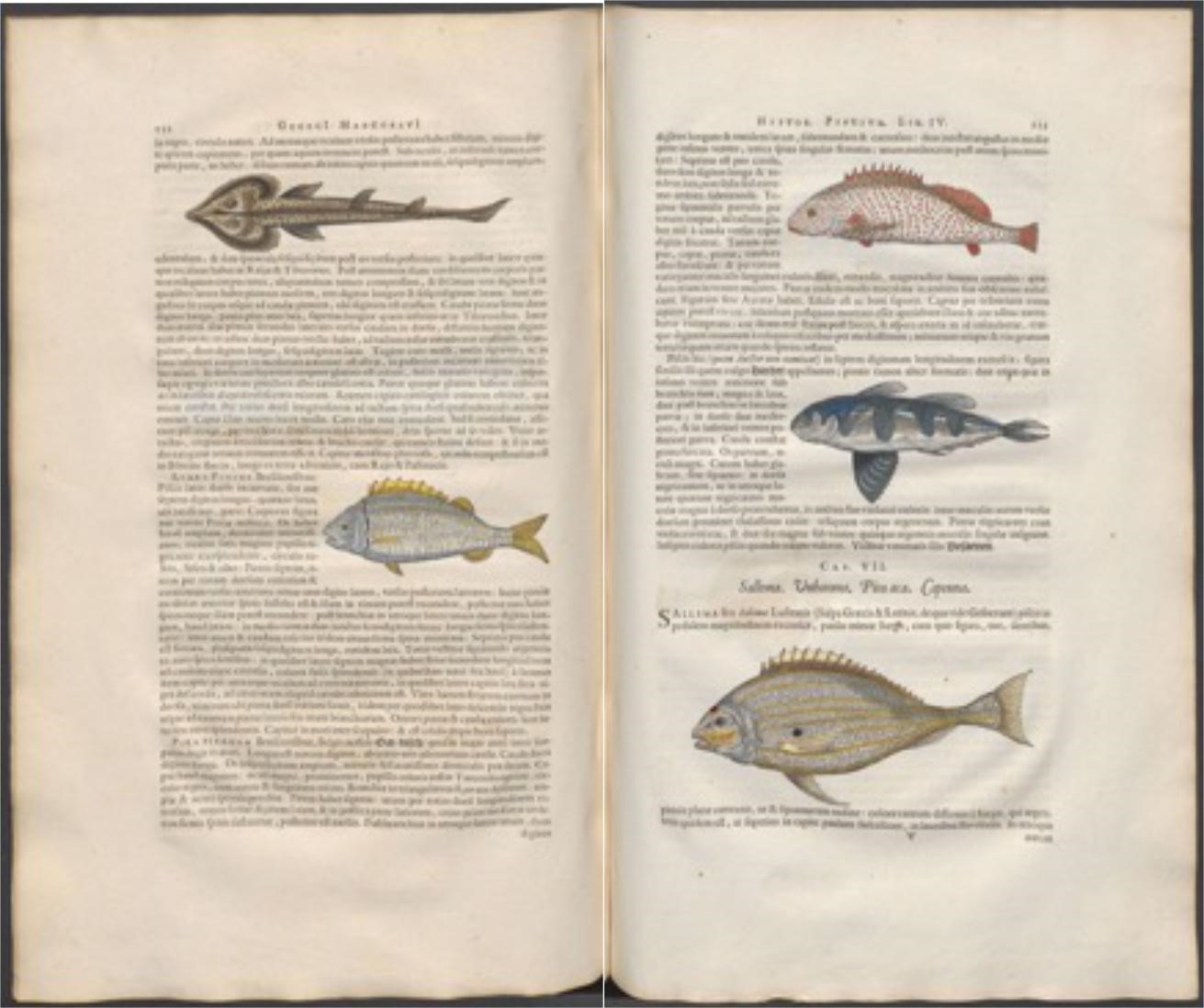 The English physician Hans Sloane (1666–1703) travelled to Jamaica in 1684 in the service of the Duke of Albemarle. Sloane paid close attention to the island’s plants and animals and wondered about their possible medicinal uses. He hoped that he could find ways of bolstering the already blooming British economy.
Upon his journey back to London, a rather tense naval journey due to the dangers of pirates lurking and warring European fleets, he indeed had amassed a significant collection of both man-made and natural objects. For the collecting of these items, he had relied on local networks of knowledge consisting among others of enslaved plantation workers that had been taken from Africa. The sea urchins that Sloane collected and had drawn for his Natural History of Jamaica (London, 1704 et. al), for example, were probably purchased or taken from slaves with diving skills (4.8). These enslaved divers were coerced by British colonisers to retrieve gold coins and other treasures from sunken ships in the Caribbean Sea. 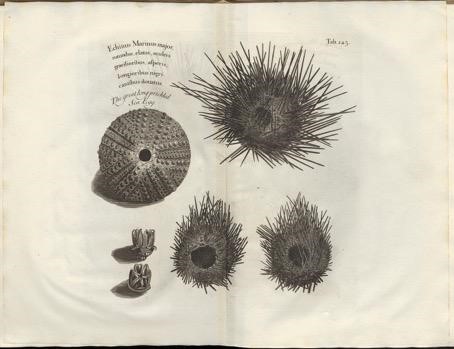 As these stories indicate, the fascination for marine exotica in the seventeenth and eighteenth centuries is part of a checkered past: one that entailed hardships and fortunes and collaboration as well as exploitation. The influx of new species and specimens also increased the desire for instilling some kind of order.