This blog post introduces my research project on ethically problematic cultural memories that pop up in response to events in the present. I study metaphors and narratives generated in American tweets regarding the 2014-2015 Ebola outbreak in West-Africa.

This blog post introduces a new research project on American social-media responses to the Ebola epidemic of 2014-2015 in West Africa. The Ebola outbreak, and the ‘scare’ that evolved in the US in its wake, appeared to revive a wild array of metaphors and narratives. Ebola sufferers were implicitly and explicitly compared to, among others, slaves, vermin, zombies, and terrorists, out to spread their abject disease. This happened particularly on Twitter, by users such as Donald Trump (not yet a presidential candidate at the time). How do events like the Ebola epidemic trigger such dormant, ethically problematic cultural memories back into collective consciousness? And what does such resurfacing “do”: is it disruptive in the present? I specify that question by focusing on how pre-existing conceptual metaphors constructed American narratives about Ebola on Twitter. 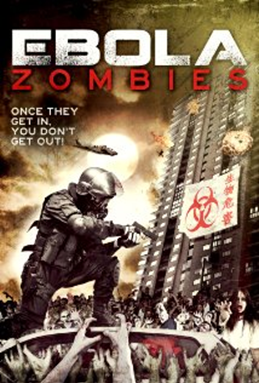 In the winter of 2014-2015 I was on an extended visit to the United States, and so had the strange privilege to be able to follow news reporting on the Ebola epidemic in West-Africa – and the handful of cases that were discovered in the US in the same period – through the local media. One aspect that often struck me about American news reporting was its tendency to frame issues as a direct threat to the individual news consumer. Especially after a case was discovered in New York, local radio in New Haven would helpfully compute for me how many (or rather: how few) miles there were between myself and the nearest person with confirmed Ebola.

Perhaps it is this style of reporting that is in part responsible for the fear that news on the Ebola outbreak produced in the US. In any case, I noticed the intensity of responses on social media and news forums. People with symptoms that might indicate an Ebola infection were immediately dubbed “Ebola suspects”, implicitly criminalizing them, and many demanded that all flights from Africa be suspended. Donald Trump on top of that, suggested that the man who entered the US from Liberia, and later fell ill with what turned out to be Ebola, had purposefully infected as many people as he could. 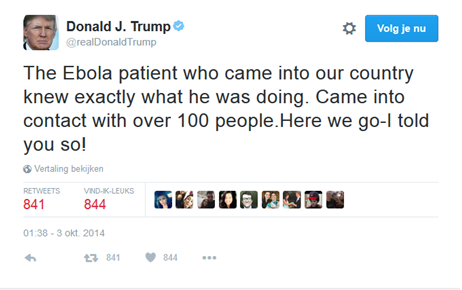 While Trump’s tweet merely suggests that the patient had an agenda to spread the disease, many have explicitly referred to Ebola patients as zombies – historically a cultural figure evolved from Haitian slavery narratives. Soon images of Ebola victims ‘risen from the dead’ went viral, and a few months later, the straight-to-dvd movie Ebola Zombies (Leung, 2015) appeared. Also, an avalanche of tweets appeared that somehow connected the transatlantic slave trade to Ebola (presumably because both affected the same region in Africa?), such as the ‘joke’: “What did your last slave die of? – Ebola”.

So, how are we to understand such responses? Are they driven by the same kind of vitriol that Tessa de Zeeuw in the previous post on this blog has so aptly termed fury? Are they meant to be taken in jest? The ultimate proof that to many white Americans black lives don’t matter at all? As a kind of tongue-in-cheek reference to old memories of white American guilt?

Of course all of the above may apply in different measures across cases, and obviously there are millions of other tweets that mention Ebola in relation to just about anything else. But my hunch is that that are systematic tendencies in American tweets in response to Ebola from the last months of 2014. Most of them seem to come back to only a couple of key metaphors, drawing up only a handful of basic narratives (or narremes to use Eugene Dorfman’s term). And those narratives mostly invoke cultural memories and discourses (for instance about slavery and its supposed benefit to the enslaved) that have been or seemed absent for a long time. 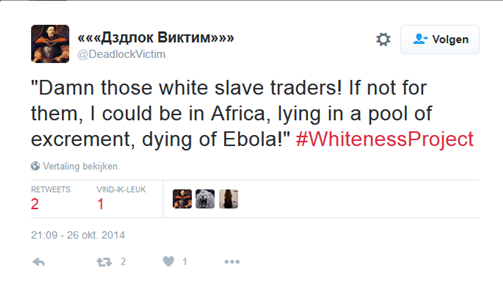 I research tweets particularly, because I see Twitter as a massive repository – indeed a junkyard – of statements, thoughts, affects, ideas, opinions, jokes and so on, that make visible some of what goes on in society’s underbelly. In fact, it makes it quantifiable, searchable and sortable, which is the part I hope to get a computer to do. This will yield a systematic overview of the metaphors and narremes that are most widely employed, so that I can see what they are used for, and particularly which broader cultural narratives and memories they revive and appropriate.

On a theoretical level, I would like to show that Ebola – and, for that matter, many other events in the present, such as the refugee crisis in Europe – revive ‘dormant memories’. Memories that once seemed absent, but are resuscitated by events in the present, occasionally to become disruptive. For instance, in this case, of effective action against Ebola in Africa. 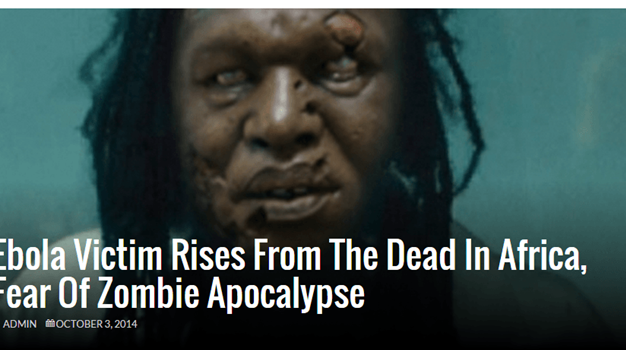 The field of memory studies historically evolved mainly in response to the Holocaust, and the societal need to deal with the ghosts of the war. Holocaust survivors had memories of their experiences that many societies, usually after initial reluctance, wanted to retain and honor. Around the same time – and for the same reasons – the field of oral history came to fruition. This field, like memory studies, was interested in ‘giving a voice’ to groups that would not otherwise be heard. One of the key insights both fields have produced is that the selection of memories of the past individuals and groups retain depends on what best serves their needs and ideologies in the present. However, they also both have a tendency to ‘give a voice’ only to cultural memories of (previously) marginalized groups, and rarely study cultural memory that is flagrantly non-politically correct. Cultural memory revived among groups of white Americans in response to the Ebola epidemic is perhaps distasteful, but, voiced through the likes of Donald Trump, also increasingly unapologetically present. As such it demands critical attention.