If French Politicians Were More Pop...

After several months of presidential campaign, and Emmanuel Macron's election, the most interesting element of this campaign could be the numerous analogies inspired by the disastrous French political landscape, reminding us of its old fable tradition.

The verdict has been in for almost a month: Emmanuel Macron is the French President for the next 5 years. Even if it was predictable after the first tour results (April, 23rd), nobody can deny that the campaign was a real disaster.

To become the French President, a candidate needs to be elected with an absolute majority, which means that he has to obtain at least 51% of the votes. If none of the candidates obtains this during the first tour (which has never happened), French people have to choose between the two top candidates during the second tour. The French have historically been hesitating: electing once the center-right party “Les Républicains”, represented this time by François Fillon, and then the center-left “Parti Socialiste” represented by Benoît Hamon. But this year's results were significant: the two top candidates being Emmanuel Macron (from a social-liberal movement called “En Marche!”) and Marine Le Pen (from the right-wing populist and nationalist party “Front National”), eliminating both of the major parties in one single tour. 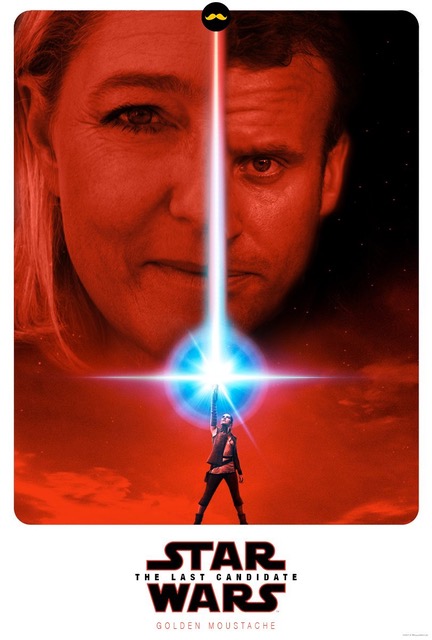 This major change was not a surprise since the last months were like a bad movie after which French people ended up tired and disgusted by their political landscape. One of the candidates has been accused of having paid his wife with public money for work she never did, an anti-Europe candidate could have stolen money from European public funds, another one, chosen by people to represent a party, has been betrayed by his own colleagues who decided to support another candidate, involved in former governments...

However, sometimes mess leads to creativity, especially on social networks, considering the numerous publications which compare the candidates to pop culture's elements, proving once more the French high sense of sarcasm.

Some of these analogies are so direct that the viewer easily recognizes the different candidates: they are named but depicted as a pop culture's element, like a fictional character. The idea only consists in choosing, on one hand, a politician and, on the other hand, the fictional character whose behavior the politician can be associated with, by following or not a predefined theme: 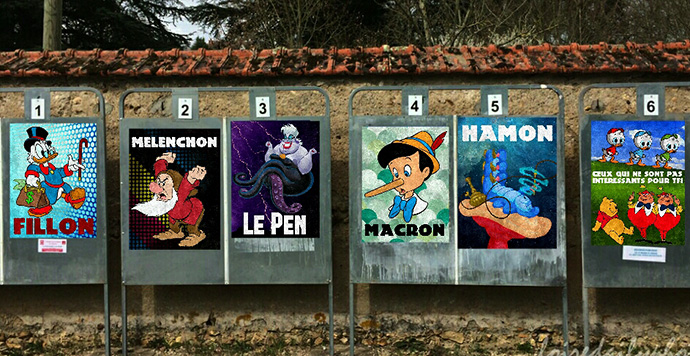 As the source was unknown, people shared this image on social networks, believing that the posters were actually hung in Disneyland Paris, just as Corsemachin, a satiric website spreading false information, wrote it as a joke in its article.

With this kind of analogies, the aim is clearly to criticize politicians by using the cultural background of a character, and mostly its defects (Pinocchio is a liar, Scrooge McDuck loves money...), as a caricature, based on a preexistent common reference. This choice makes the analogies more explicit, as its authors seem to aim at clarity so much that they don't hesitate to list the reasons why they chose this precise reference, especially on twitter and websites entitling their publications by following this scheme: “If the candidates were...”.

From Harry Potter's characters to smartphones, Haribo candies to social networks, game consoles to brands motto and even football players, all these analogies come from pop culture and assimilate two different worlds to create a tension between humor and criticism, but also to enrich both these worlds which one another. 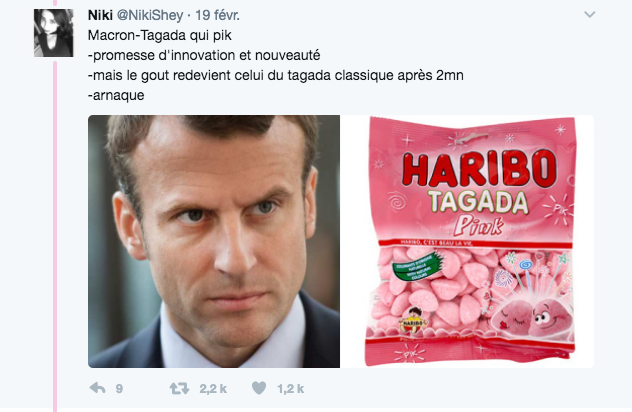 Indeed, a consequence of this phenomenon is that pop culture and politics feed one another: pop culture enlightens some specific characters traits of the representation people have of a candidate, but politics also enriches the social imaginary, so that during a debate between the candidates, one of the most popular searches on Google.fr was “Marine Le Pen Voldemort”, proving that these analogies really influence common representations. 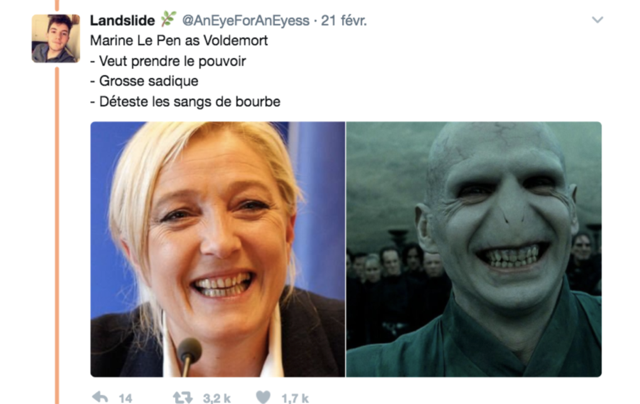 However, some of these analogies are less direct. Realized by artists directly in the streets or spread by anybody on social networks, false posters showing fictional characters feature them as if they were effective candidates. 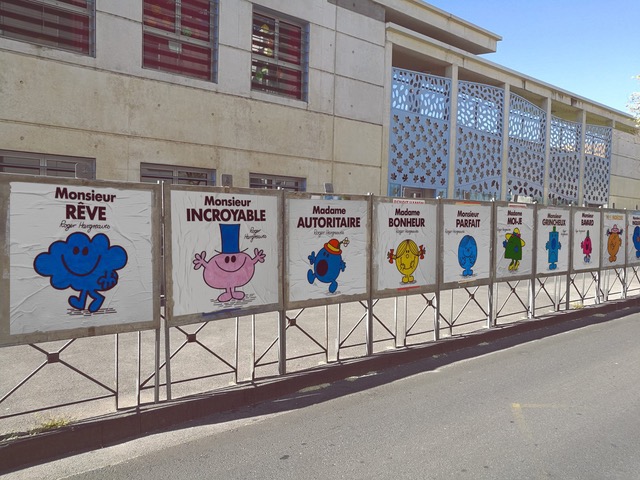 False “Mr. Men and Little Miss” campaign posters hung above real ones in Montpellier (France), by the live performer Efix 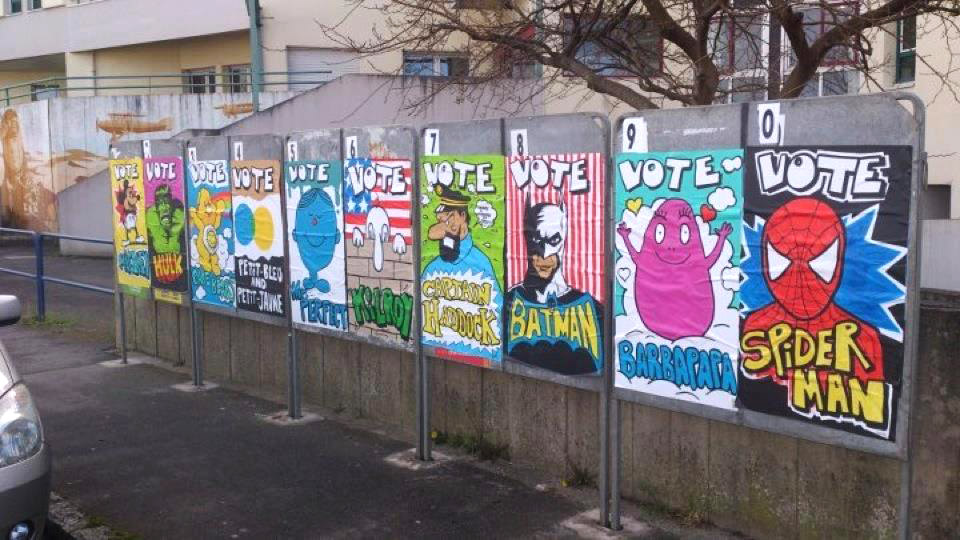 Anonymous posters superimposed over real ones 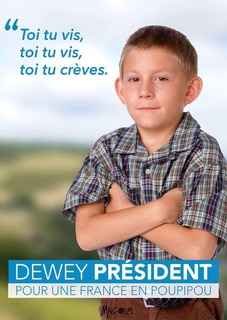 By using analogies, these false posters may implicitly denounce behaviors in the same way as fables, for example, and viewers might have tried to link characters to real candidates but nobody is actually named, as a proof that these characters are as legitimate and credible as the real candidates, according to the commentaries on social networks.

But other communication tools besides posters have been sources of analogies too. A false campaign clip based on Star Wars has also been created, or fictional characters's communications have been written to invite people to vote for a specific candidate: in an article, Sauron (the bad guy from J.R.R. Tolkien’s Lord of the Rings) surprisingly invites people to vote for Emmanuel Macron because, “Even though the economic program of the National Front is inspired from the Mordor’s politics, Marine Le Pen’s ideas in terms of immigration are too dangerous, radical and archaic.”[4].

Campaign against the Front National by “Les Jeunes Socialistes”[5]

Finally, the mess known for several months before French presidential elections has at least been a source of creativity, proving how much French people are disgusted and mistrustful of their political landscape. Pop culture proves itself an interesting support for analogies: known enough to ring a bell in any viewer’s imagination, but also considered as free material, flexible enough to make art and/or humor with, which reminds us of the fables tradition, featuring anthropomorphized animals to denounce human behaviors. According to Michel Pastoureau[6], Jean de La Fontaine (the most famous French fabulist) used a bestiary composed of common animals to communicate with the reader’s culture, aiming at creating a complicity with the reader who recognizes easily the qualities and defects depicted. What’s interesting too is the tension between the popularity of a candidate (how much (s)he’s known) and their popularity ratings (how much (s)he’s appreciated), the higher the first one is and the lower the second, the more it seems to be a source of analogies, aimed at criticizing and even denunciating his/her ideas. According to this, if the French candidates were more popular, for sure they would be less “pop-culturable”…

- Promises of innovation and novelty

- Wants to take over power

- Is a huge sadistic

[4] Personal translation of a satiric article by <Le Gorafi <http://www.legorafi.fr>>.

[5] “Presidential elections. Don't fall to the Dark Side of the Force.

I am my Father.