On September 21st The Hague celebrates the UN International Day of Peace with the Just Peace festival - but is there more to 'peace' than what is being celebrated? An exploration of The Hague's Yi Jun Peace Museum.

City of Peace and Justice

Today, September 21st, is the UN-declared International Day of Peace. To celebrate this day, The Hague, 'The International City of Peace and Justice', organizes the Just Peace festival from the 21st until the 25th of September.

As is well known, the City has been host to a number of crucial international institutions for more than a century, and has been the seat of the UN’s judiciary since the completion of the iconic Peace Palace in 1913. 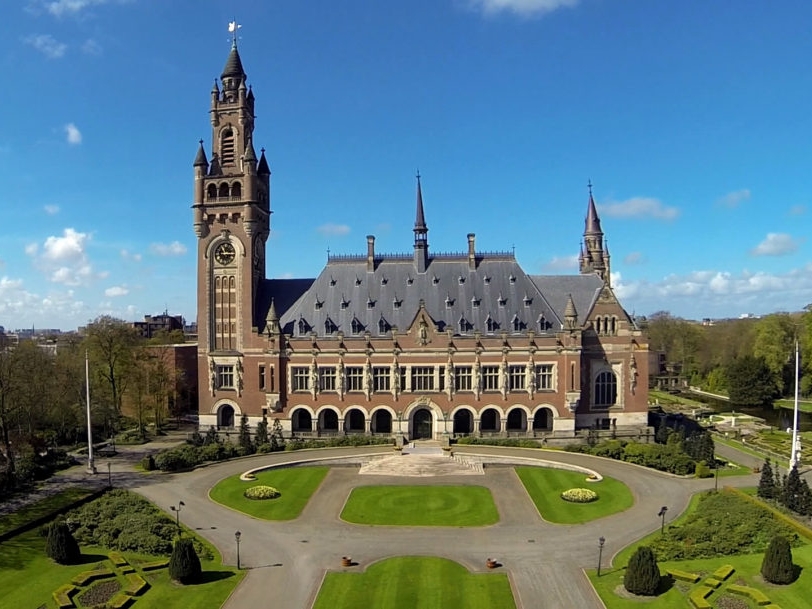 The Peace Palace, The Hague

A whole range of activities are planned for the festival. The program presents a ‘Peace Run,’ public debates, exhibitions, guided tours, and a one-day festival called ‘Peace in the Park’ with music, workshops, dance and meditation, amongst other things. Visitors, the festival’s website explains, can experience “peace as a source of inspiration” and learn how they can “practice” it in their own everyday lives.

This sounds nice, but it raises a question: what 'peace' is being celebrated on this international day? And how does the festive understanding of the term the program presents relate to the everyday political practice of The Hague's international institutions?

Peace in the Park festival banner

In the context of these questions I want to draw attention to another location in the city that is devoted to the idea of peace: the Yi Jun Peace Museum, a tiny museum located in the Wagenstraat in The Hague’s China Town, just to the south of the main shopping street. Its entrance is hardly visible; a Korean flag marks the front door, but one has to ring a doorbell in order to gain access.

Entrance to the Yi Jun Peace Museum in the Wagenstraat, The Hague

An elderly Korean man will open the door and when you reach the top of the stairs ask you for the 5-euro entrance fee -- not your regular museum entrance. But the museum has a story to tell that bears significance for today's celebrations.

The Story of Yi Jun

In photographs, documents, newspaper clippings, and curator signs, the Yi Jun Peace Museum tells of three Korean diplomats who were sent to The Hague in 1907 by the Korean emperor, Kojong, to visit the Second Hague Peace Conference. In 1904-1905, Japan had forced emperor Kojong to sign a treaty that established Korea as Japan’s protectorate. As such, the Japanese had taken charge of Korea’s governmental affairs, internal and external. 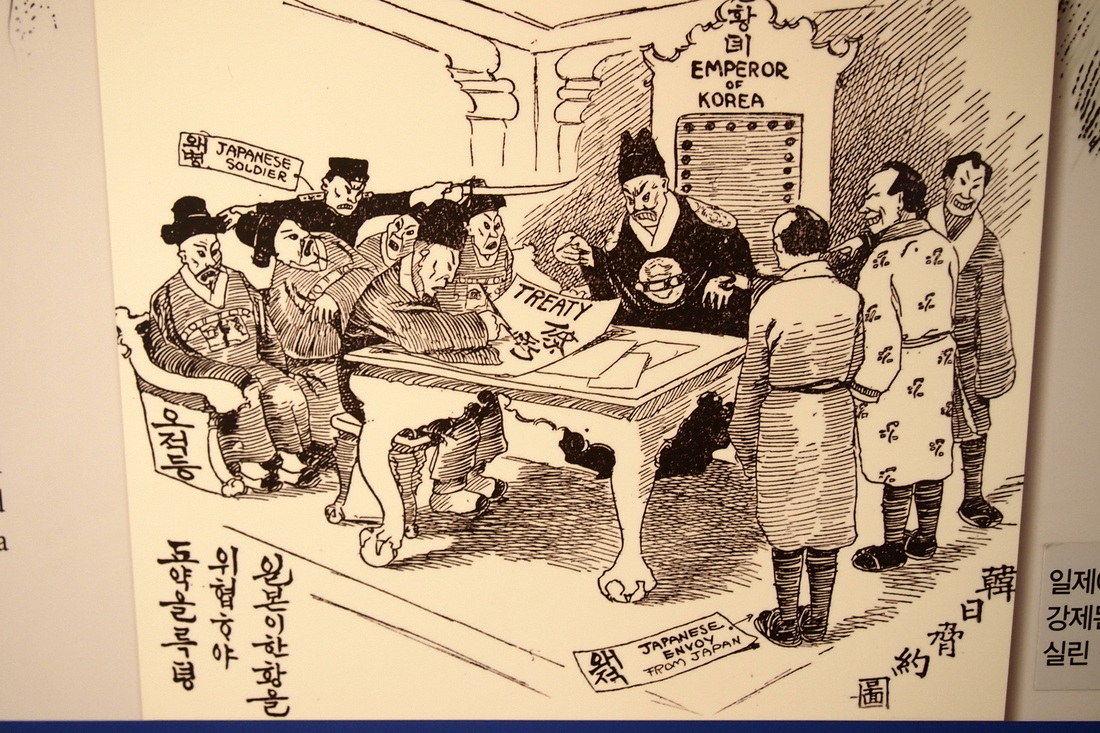 Cartoon about the signing of the Treaty in 1905, in the Yi Jun Peace Museum

The Korean emperor sought international acknowledgment of the injustice of the Japanese invasion and hoped to find redress in The Hague, but in vain. The US and Britain had signed treaties with Japan promising not to interfere in the matter of Korea, in exchange for the protection of their own colonial possessions elsewhere in Asia and for the safeguarding of their commercial interests. Consequently, the other states acknowledged the Japanese diplomats as legitimate representation; the Korean emissaries’ credentials were not recognized and they were denied access.

After some days of attempts to reach the Conference, and then the press, one of the emissaries, a man called Yi Jun, died in his room in hotel De Jong in the Wagenstraat, where he and his colleagues stayed during their mission. His death remains a mystery until this day – some believe he committed suicide because of having failed in his mission; others suggest that he was killed by the Japanese. 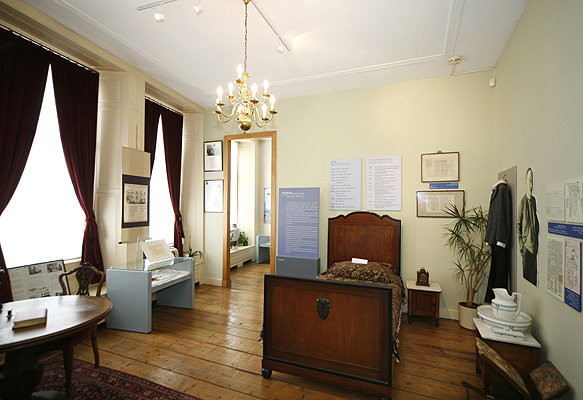 The South Korean businessman Lee Kee-Hang and his wife Song Chang-ju founded the Yi Jun Peace museum at the site of the former hotel De Jong in 1995. The museum seems to draw mostly Korean visitors, who want their picture taken with the giant bust of Yi Jun that decorates the museum’s small entrance hall. He is honored by Koreans as a martyr and a national hero. 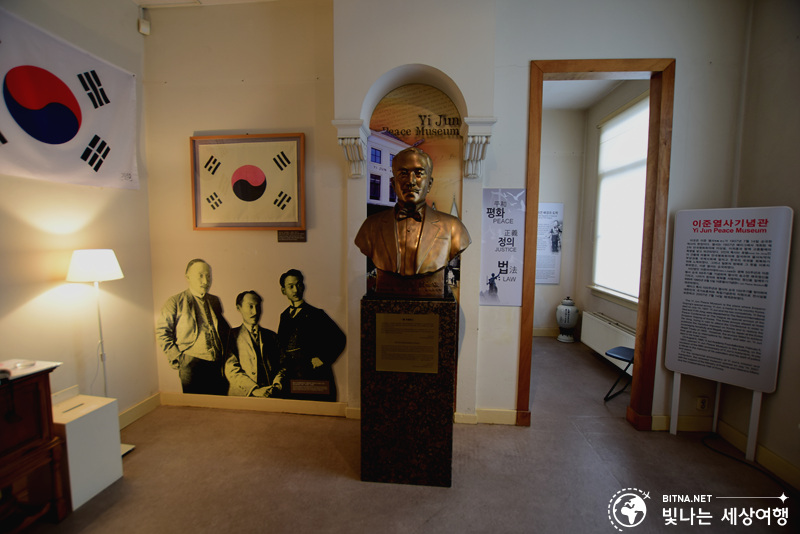 A Paradox of International Law

With the story of Yi Jun the museum tells of the self-interested refusal of other states to intervene on behalf of Korea, and the exclusion of the representatives of a colonized state, presenting thereby a fundamental paradox of International Law as an institutional order: its ‘players’ are nation states recognized by an international community of other recognized nation states, and ‘recognition’ is a highly political affair.

The Peace Conferences of 1899 and 1907 were the occasion for the drafting of the first formal statements of the laws of war and war crimes (The Hague Conventions). These laws still provide the UN’s judiciary with jurisdiction today. As the museum draws attention to the conditions for and limits to participation in the international legal order, to its political economy, in other words, and does so in the very city in which International Law is upheld on a daily basis, we could say that it performatively ‘talks back’ to that city, asking it to be critical of the 'peace' and 'justice' it stands for. 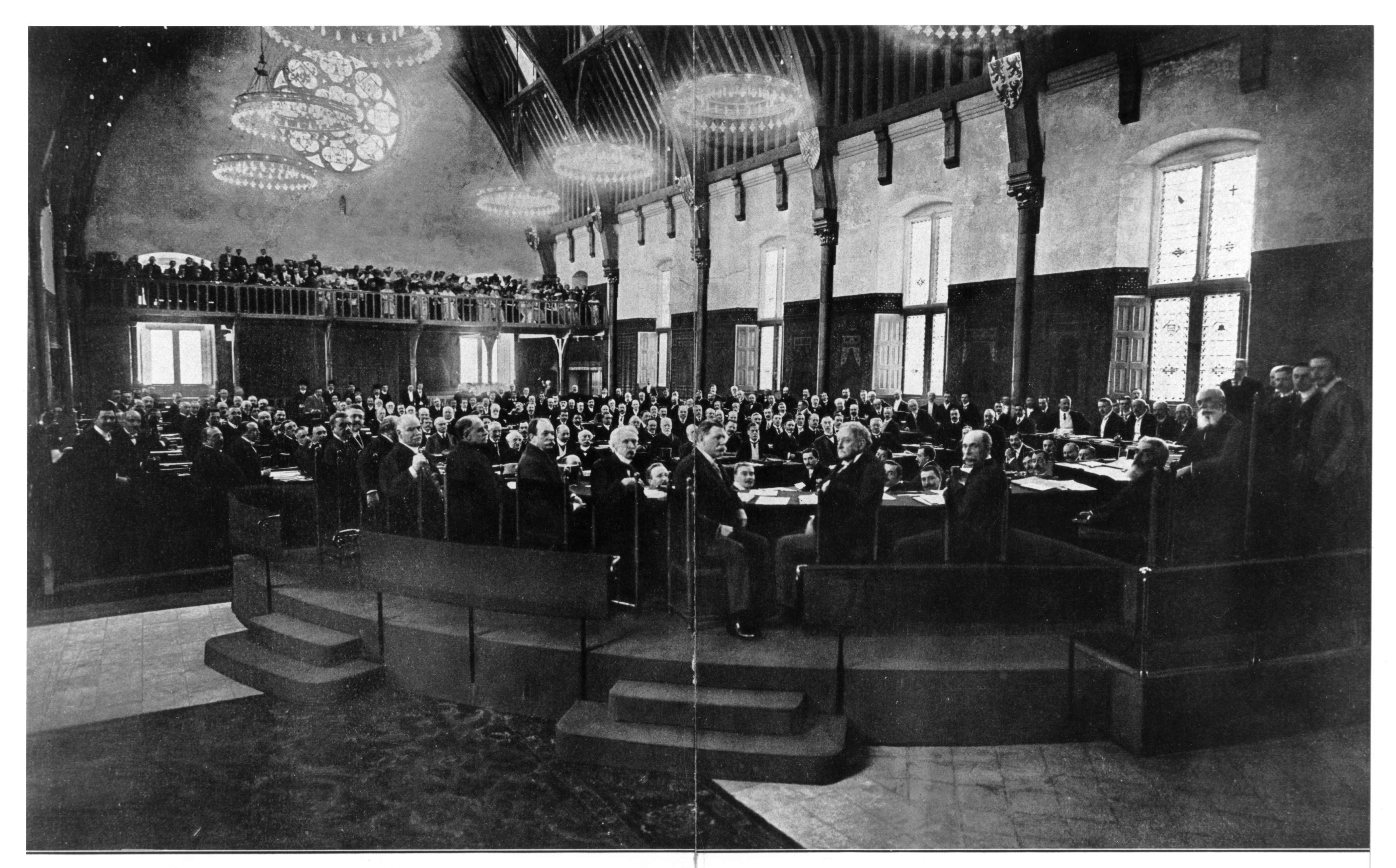 The Second Hague Peace Conference in the Ridderzaal, The Hague, 190

The Yi Jun Peace Museum has two floors. The story of Japan’s colonization of Korea and of Yi Jun and his colleagues’ exclusion from the Second Hague Peace Conference is told only on the first floor. The second, the building’s top floor, places the history of the first floor in the context of a more general reflection on the theme of peace and presents the potential of diplomatic collaboration. In one of the rooms, for example, there is a whiteboard on which visitors to the museum's opening event were asked to write down their dreams about peace and justice. Elsewhere, a wall shows framed letters of support for the museum written by Nelson Mandela and Aung San Suu Kyi, who both won the Nobel Peace Prize in the years preceding the museum's establishment (although the latter's worthiness of the prize is currently contested). 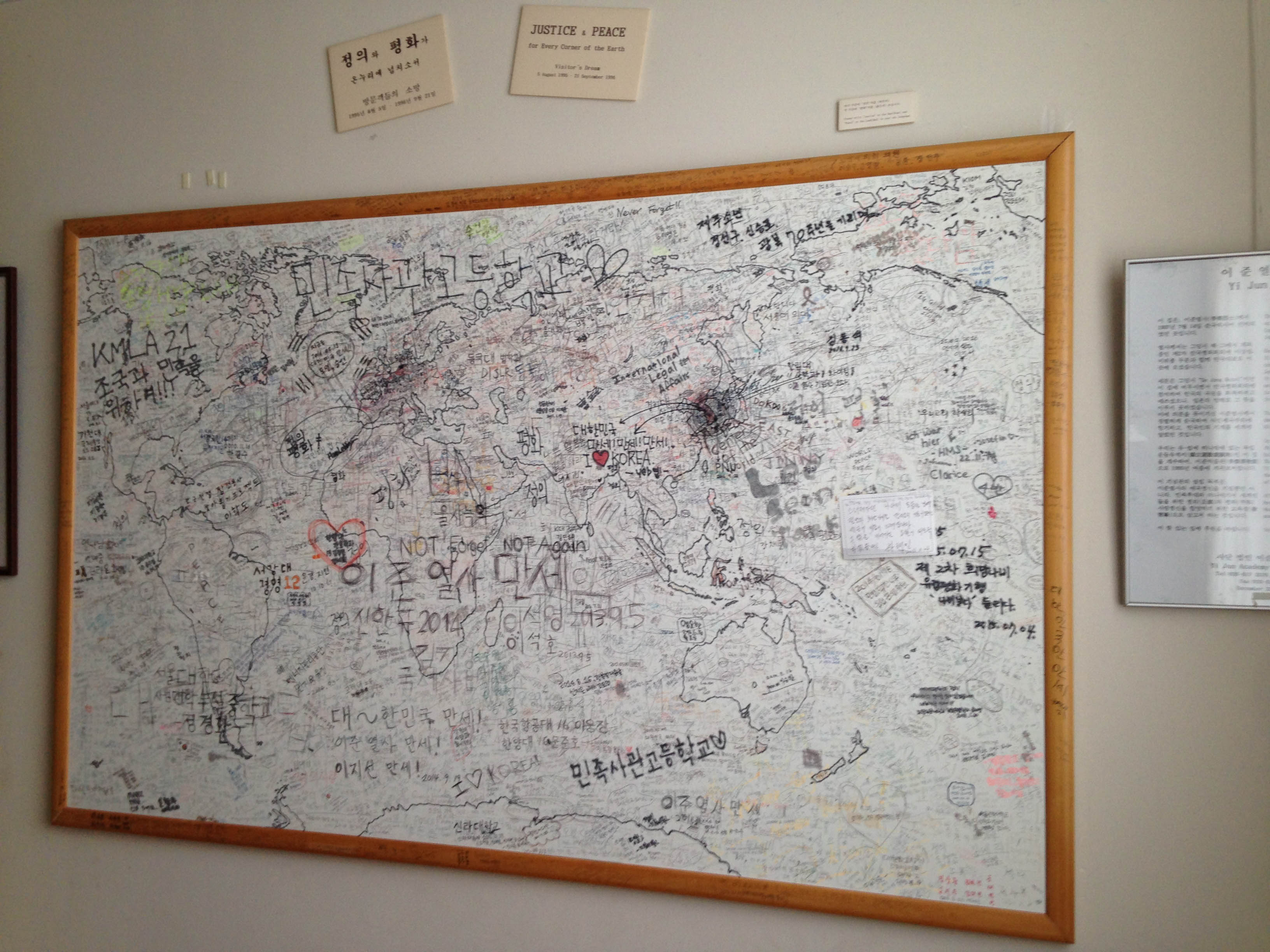 Visitors' justice and peace dreams on the top floor

In juxtaposing this more hopeful narrative and the history of colonial invasion and geo-political exclusion presented downstairs, then, the museum as a whole seems to ask its visitor to be aware of the limits of the international institutional discourse on peace and justice, but to nevertheless remain open to the utopian ideals these terms may also contain in the form of hopes and dreams, individual and shared – that is, if they are not lifted out of the political context in which they are effective.

So if you’re planning to celebrate International Peace Day on September 21 or attend the Just Peace festival in The Hague, I’d say the Yi Jun Peace Museum is well worth a small detour from the official program.

Further reading on the Japanese colonization of Korea and the Hague Secret Emissary Affair:

Peter Duus. The Abacus and the Sword: The Japanese Penetration of Korea, 1895-1910. Berkeley: University of California Press, 1995.

A Courtroom Suicide: On the Vulnerability of Legal Theatre

Half a year after the ICTY formally dissolved, this post reflects on the theatricality of an unexpected event that shook the Tribunal's foundations in its very last week: the courtroom suicide of Slobodan Praljak.

Close to the Skin: Courtroom Sketches

A post about the erotics of courtroom sketching and our collective attraction to sensational criminals.

When Law Gets Spectacular

In this post I describe my experience of watching the International Criminal Court's verdict in the recently concluded case of Ahmed Al Faqi Al Mahdi on my office computer. A reflection on the ICC's web stream: am I being involved as a spectator?