Masterpieces Remastered: Rembrandt in the age of technical reconstruction

Rembrandt’s paintings are no longer hidden treasures: technical inventions unveil information underneath the surface and share the genius’s oeuvre. What happens when aesthetically and conceptually better reconstructions are omnipresent?

Rembrandt’s paintings are no longer hidden treasures destined for a few eyes only: because of the digitalized society of the twenty-first century, Rembrandt’s genius has been unveiled to a mass crowd. However, it is not just Rembrandt’s oeuvre that is uncovered. The rapid advancement of technical inventions unveil what is underneath the surface like never before and uncover an image that is conceptually closer to what the artist intended when he started painting in the seventeenth century. What happens to the original when an aesthetically and conceptually better technical reconstruction is around?

Now more than ever, we are used to the rapid pace with which technology develops and the vast amount of digital innovations that continuously enter and influence the way we perceive the world. Inventions like augmented reality (AR), virtual reality (VR) and 3D printing have accelerated the reproduction of images and three-dimensional objects like never before. Moreover, these technological inventions have entered the art world and they facilitate the popularity of what society considers to be great artists, for it makes masters like Rembrandt van Rijn more approachable. However, this comes at a price: how often does one consider the importance of Frans Banninck Cocq in Dutch Golden Age history when one swipes one’s mouse over his face? What is left of Rembrandt’s significance when we take a selfie in the Rijksmuseum? Did art lose its historical relevance and artistic integrity and did it turn into aesthetic art-porn for mass consumption?

Art in the age of technical reproduction

In 1936, in his essay The work of art in the age of mechanical reproduction, the Marxist German philosopher Walter Benjamin already stated that the invention of the technical reproduction – photography in his time – would alter the ever so holy status of the authentic work of art.[1] According to Benjamin, the importance granted to the work of art can be attributed to its unique existence in history. The magical experience of an original artwork is provided by its materiality: the paint, canvas and colors that provide a unique proof of a set moment in the past, leading to the creation of an emotional bond with the viewer.

The word Benjamin uses to define this material authenticity that provides the unique authority of art is ‘aura’. Benjamin argues that the aura stimulates and provides the artwork with the ability to become the relic of a social cult, which causes the work of art to obtain a cult value. What happens with the introduction of technical reproduction methods – techniques that effortlessly allow high quality reproductions in a large quantity in a medium different from the original –, art loses its exclusive nature of a cult for it becomes an object of the masses.

Benjamin says that even though art was always meant to be reproducible, technical reproduction evokes a diminution of artistic value and aura, for the importance of an artwork is chosen by the mass public that no longer bases its choice on historical and emotional connections that give the original its ‘auratic’ feeling but on the omnipresent aesthetic quality of the artwork. The latter marks a shift from cult value to exhibition value: the dominant cultural connections of the work of art shifted from one that is unique in time (Einmaligkeit) to one that is ephemeral and repetitive (Reproduzierbarkeit). So according to Benjamin, the cult value of the original will vanish together with the aura leaving the original and the myth of the artist meaningless. 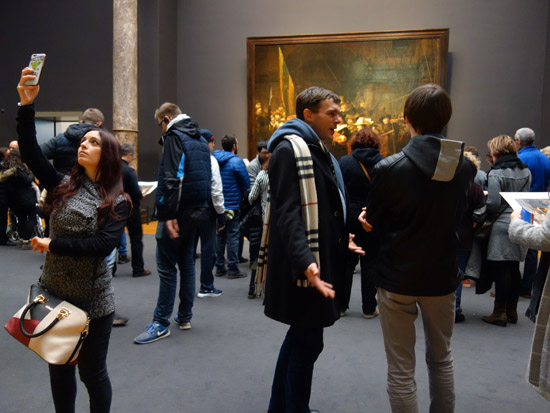 Girl taking a selfie in front of the Night Watch. Photo by Berthi Smith-Sanders

Technical reproduction of the twenty-first century

Even though Benjamin wrote his assumption almost a century ago, it could be argued that his stance is still somewhat accurate today. Rembrandt’s paintings are no longer a hidden treasures to be seen by only a few but it has become the objects of mass popularity. However, something that Benjamin never imagined possible is that the technical inventions that exist in the twenty-first century could make the work of art itself visible and accessible to a larger public. Material scientist and leader of the NWO-project Science4Art: Nieuw licht op Rembrandt: Door de verflagen heen (New light on Rembrandt: through the painted layers) Joris Dik says that these technical inventions reveal the visual and material characteristics that lie beneath the façade of the painted surface. [2]

This information, combined with the recent invention of 3D printing fine art, makes it possible to visually and physically reconstruct the image that is aesthetically closer to Rembrandt’s version that left the artist’s studio in its original composition. This, for example, happened in 2012 when Rembrandt’s Night Watch was exhibited in the Magna Plaza in Amsterdam in its original composition with the color scheme Rembrandt’s contemporaries saw; [3] and in 2015, when a combination of digital data and 3D printing allowed to reconstruct Rembrandt’s Saul & David as a whole again, including the artist’s characteristic use of impasto and heavy brushstrokes.[4] 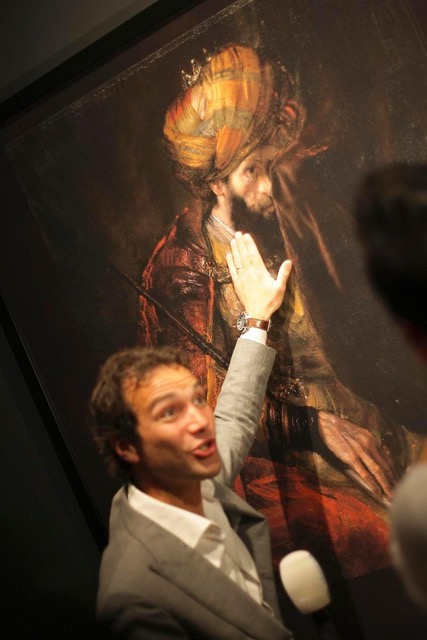 To go beyond this idea, Dik – in collaboration with ING Bank – took the gathered information on Rembrandt to an extreme in The Next Rembrandt project of 2016 to generate a new painting in Rembrandt’s oeuvre.[5] The use of digital information and 3D printing as a medium to form the painting physically led to the creation of a ‘new’ Rembrandt.

Aura in the time of remastered masterpieces

However interesting this new information is and these new opportunities are, philosopher and scholar Jos de Mul remarks “Mechanical reproduction discloses the world in a new way, bringing along both new opportunities and new dangers.”[6] What happens with the previously mentioned cases is that the technical innovations reveal a different and ‘new’ Rembrandt that is closer to the artist’s concept, color and even its texture than the filthy ‘ruined’ version that is exposed in the museum? The original is ‘remastered’ to a previous and possibly ‘healthier’ state. Does this, in Benjamin’s auratic experience, mean that the technical reproduction causes the aura of Rembrandt’s original to migrate to the reproduction and thus looses its aura? Or does this mean that Rembrandt’s original can be granted two aura’s: one to the original, for it beholds the connection with history in its materiality, and one to the remastered reproduction that provides the conceptual aura of the artist’s intention?

So to come back to Benjamin’s idea that 3D printing in combination with digital invention means the death of art, I would say otherwise: the obsession with the artist caused by technical invention allows the original to multiply in aura. As Mul argues: “The development of mechanical reproduction can neither simply be hailed as cultural progress nor simply doomed as cultural decline.”[7]

Thus the existence of the digital reproduction can be seen as a conditio sine qua non: appreciation of the aura of the original would not exist if there was not something to threaten it. It is society’s task to reach a consensus about the way aura is granted in an age where remastered versions of Rembrandt’s original masterpieces exist.

[2] Science4Art is a program of the Nederlandse Organisatie voor Wetenschappelijk Onderzoek (NWO) that wants to enforce and stimulate research on the conservation and restoration of art. Joris Dik was the leader of Nieuw licht op Rembrandt: Door de verflagen heen, a four-year project (2012-2016) on the material qualities of Rembrandt’s oeuvre:. For more information on the program: https://www.nwo.nl/en/research-andresults/programmes/science4arts (accessed May, 2018)

[3] Rembrandt: All his paintings was an exhibition held in the Magna Plaza in Amsterdam in 2012-2013 that exhibited digitally reconstructed copies of Rembrandt’s paintings

[4] The 3D reconstruction of Saul en David was on display in the Rembrandt? De zaak van Saul en David exhibition in het Mauritshuis in the Hague from June 11, 2015 until September 13, 2015. The 3D reproduction was created by TU Delft and Océ Technologies B.V. For more information: https://www.mauritshuis.nl/nl-nl/pers/persarchief/2015/mauritshuis-schrijft-schilderij-saul-en-david-toe-aan-rembrandt/ (accessed May, 2018)

Elkhuizen, W., et. al., A 3D printed reconstructing of a painting’s original size: showing the original size of Saul and David by Rembrandt., 2015