The Murky Waters of Classification. Ordering Fish in Eighteenth-century Europe

The Swedish naturalists Peter Artedi (1705–1735) and Carolus Linnaeus (1707– 1778) had an insatiable thirst for order. They unravelled the structure of the natural world, and introduced the binominal system in use today.

Fishes had been subject to categorization from the sixteenth century onwards, although in this period various taxonomical principles could co-exist at the same time. Approaches towards ordering nature changed significantly in the late seventeenth and early eighteenth centuries. This can be seen, for example, in the fish book Historia piscium (Oxford, 1686) written by the English naturalists Francis Willughby and John Ray. Their book offered a precise definition of a fish: namely an aquatic animal, lacking feet, with either naked skin or scales, swimming by means of fins, living perpetually in the water, and never of its own volition coming out onto dry land. This definition narrowed the scope of what they thought should be included in a fish book – and what should be left out.

This wish to define and demarcate also drove later naturalists. Especially the Swedish naturalists Peter Artedi (1705–1735) and Carolus Linnaeus (1707– 1778) seemed to have an insatiable thirst for order. Artedi devised a system in which all fish species could be grouped into genera, families, orders and classes. He stated that an ichthyologist should look for specific characteristics that distinguished certain groups of fish species from others, such as the number of fins, the position of the fins, and the numbers of rays in the fins. By paying close attention to external characteristics a naturalist could unravel the structure and design of the natural world. Artedi used this new approach to the study of fishes in a book entitled Ichthyologia (Leiden, 1738) published posthumously by his close friend Linnaeus. 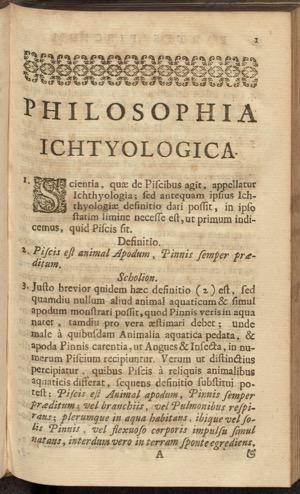 Although Artedi died prematurely by drowning in an Amsterdam canal, his work effected a lasting change in the way that naturalists organised fish species. Linnaeus’s legacy was even greater. He established genera, families, order and classes for the three natural kingdoms of animals, plants and minerals. He also introduced the binomial system still in use today. This meant that species names consisted of a genus and a species name, rather than of the short diagnostic sentences that were used as species names until that time. His Systema naturae (Leiden, 1735) offered a first systematic account based on his principles. The classification system also provoked criticism. The Parisian naturalist Comte du Buffon called it arbitrary and artificial, a discourtesy to the diversity and richness of nature. Nonetheless, the standardization of species names facilitated communication between naturalists.

Some aquatic animals, however, resisted clear-cut classification. One of these impervious creatures was the mermaid. Stories of mermaid sightings circulated from Antiquity onwards and surfaced throughout the Early Modern Period. Reports of mermaid sightings also remained quite common in the eighteenth century, often celebrated as the great age of reason. One such report can be found in François Valentijn’s account of Ambon: Oud en Nieuw Oost-Indiën (Amsterdam, 1727). One could, however, also glimpse sight of a mermaid closer to home. Upon reading reports of mermaid sightings in Stockholm newspapers in 1749, Linnaeus wrote to the Swedish Academy of Science and urged them to try and catch this creature alive, or else preserve it in spirits. In one of his notebooks, Linnaeus listed the mermaids under the humans and the apes. In the second edition of the Systema naturae (1740) he adopted the mermaid into his category of paradoxa, together with other complex beings such as the satyr. 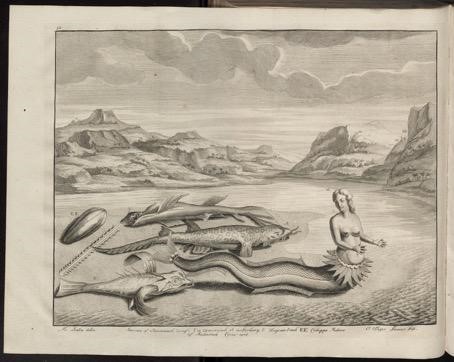 Other naturalists, notably Artedi, grouped mermaids among the whales. But were whales, in turn, even fish? This too was subject to debate. Whales and other cetaceans had long been lumped together with the fishes, and for good reasons. The definition of a fish that Willughby and Ray drafted, for example, also applied to the whale. It was Linnaeus who decided that whales should be grouped with the mammals rather than with fishes on the basis of their internal similarities. This change was published in the tenth edition of the Systema naturae (1758), today considered to be the most authoritative version of this work. Linnaeus’s decision to divorce the cetaceans from the fishes was adopted by a fair share of naturalists, but in practice whales often continued to be considered fishes, at least outside academic circles.

Despite these ambiguities many naturalists actually took to the Linnaean system. They applied the method to fishes observed in their home region as well as to fish encountered in foreign, faraway regions. The Berlin physician Marcus Élieser Bloch (1723–1799) had a passion for the natural history of fishes. Bloch set out to collect, describe, compile and publish an overview of the fishes of the Prussian states because he found his copy of Linnaeus lacking descriptions of even some of the most common fish species existing in those states. His research resulted in the lavishly illustrated twelve-volume Allgemeine Naturgeschichte der Fische (Berlin, 1782–1795). 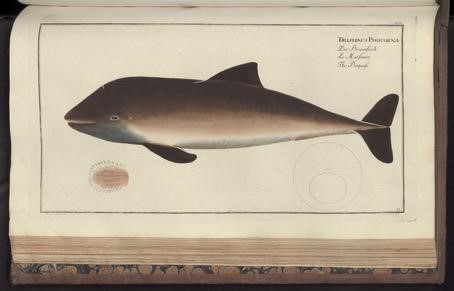 Drawing on his connections with fellow naturalists as well as on contacts with travellers such as missionaries, Bloch managed to amass thousands of fish specimens. His fish collection grew to encompass not only fishes from the German states, but, also what he called ‘foreign’ fishes. As a result of the ongoing European expansion, he managed to describe fishes from i.a. the Americas, East-Indies, India and Africa. Like many other naturalists, he soon found that he could not fit all these species into the genera that Artedi and Linnaeus had established and therefore needed to create new categories. He also included the porpoise in his ichthyological oeuvre, and thus did not follow all of the taxonomic rules proposed by Linnaeus.

The emergence of classificatory systems resulted in sharply articulated definitions and a standardization in naming practices. Yet also within this seemingly stable system, rules and categories shifted. The Systema naturae remained under continuous revision, and naturalists ignored, altered or added rules to the system that this seminal work unfolded. The emphasis on classification also signalled a shift towards increasing specialization, as not only the natural world but also the world of knowledge itself was divided into an increasing number of categories.

Margócsy D., ‘“Refer to Folio and Number”: Encyclopedias, the Exchange of Curiosities, and Practices of Identification before Linnaeus’. In: Journal of the History of Ideas 71 (2010), p. 63-89.