The Rage and The Machine

Can a retweet be a criminal offense? Yes, say judges in a recent verdict in the The Hague 'Context-case,' which deals with the question of 'incitement' in the use of social media by terrorist organizations. And what does this say about Twitter?

Recently the Court in The Hague decided that retweeting a message may constitute a criminal offense, if it can be considered an ‘incitement’ according to the Dutch Criminal Code. In the ‘Context-case,’ nine suspects were prosecuted for taking part in a criminal organization with terrorist intent and for inciting others to take part in that same organization through social media. 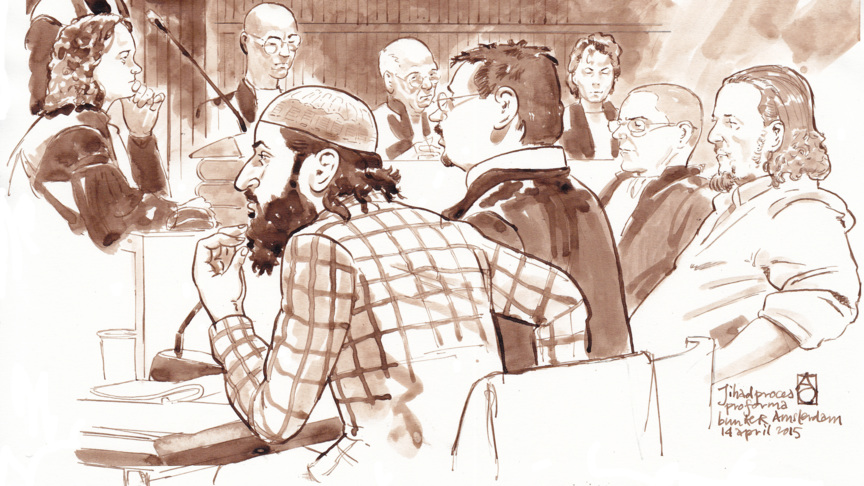 Courtroom drawing at one of the 'Context-case' hearings

The case received a lot of media attention, as it was one of the first to deal with the growing number of Muslims traveling to Syria from the Netherlands to join the Islamic State, and with The Hague’s local networks of ISIS recruitment. It also tells us something about how the law perceives social media platforms like Twitter and Facebook.

The Hague Court is not the only legal institution to grapple with the question of social media use in the context of terrorism. In fact, Twitter Inc. is currently facing a lawsuit filed by a woman whose husband was killed by terrorists in Jordan in November 2015. She claims that Twitter provides ‘material support’ that has been instrumental in the rise of ISIS and the attacks they have carried out. The lawsuit has little chance of juridical success. Providing ‘material support’ to a terrorist organization, as defined in the Communications Decency Act, means that Twitter would have to have actively done something to assist ISIS, like having rented a data center at their request.

Nevertheless, cases like this lawsuit and ‘Context’ indicate a growing interest in the role social media platforms play in relation to terrorism. Twitter and Facebook facilitate specific modes of communication, such as ‘sharing,’ ‘liking,’ and ‘following,’ that allow messages to spread with vast reach and networks to grow incredibly fast.

In 2013, researchers from Beihang University in Beijing, China reported on a research that proved anger to be the emotion that spreads quickest and furthest through Weibo, a Chinese social network that resembles Twitter. As anger and also fear are affects that play a part in luring people to join terrorist organizations or that contribute to the effects of acts of terrorism, the state is becoming more interested in formulating some rules for the use of these media.

So how do the judges in the ‘Context-case’ go about doing this?

Most of the suspects in ‘Context’ were ultimately sentenced to prison for taking part in a terrorist organization and for what the Dutch Criminal Code calls ‘incitement.’ In short, the crime of incitement consists of publicly encouraging others to commit a criminal offense or an act of violence against the state (art. 131). Specifically, the ‘incitement’ in this case involved the suspects’ use of social media to convince others to join ISIS, or in legal terms: to join a terrorist organization.

As part of the chapter in the Criminal Code that deals with crimes against public order, article 131 deals with the mechanisms that ‘organize’ organized crime, and more recently terrorism. But it also has a history of being invoked in the context of forms of collective revolt. In fact, the article concerning incitement was formulated against the backdrop of social unrest in the late nineteenth century, in the 1886 edition of the Dutch Criminal Code – the version still in use today.

According to Willem de Vlaming's contribution to the volume Criminaliteit in de negentiende eeuw, the new article 131 had the supplementary purpose of opposing the rise of socialism and enabling the state to prosecute socialists who publicly criticized the societal order at their meetings. 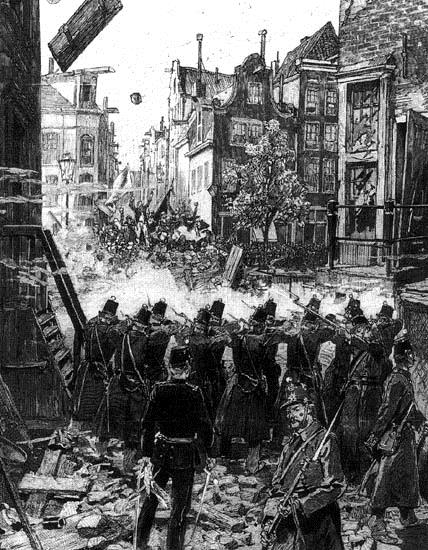 The 1886 ‘Palingoproer’ in Amsterdam’s Jordaan neighborhood was associated with the rise of socialism in the late nineteenth century. Against this backdrop the Dutch state formulated new laws on incitement in the 1886 Criminal Code.

Meetings held by late nineteenth-century socialists were confined spatially, bringing together a limited number of people for a few hours. Every single tweet, however, has a potentially global reach, and retweeting spreads messages at a speed those socialists could only have dreamt of. It is those fluttering, swarm-forming Twitter-wings that the Court in ‘Context’ seems to be looking to clip.

In that context, the ‘retweet’ poses an interpretative challenge for the court. A retweet is a push-of-a-button share of someone else’s message. But the law requires a transparent connection between author and statement in considering ‘incitement.’ The Court says that it adopts Twitter’s principle that a ‘retweet does not equal endorsement.’ But, as a Buzzfeed article explains, it was in fact a Twitter user – not Twitter Inc. – who came up with this principle. New York Times editor and early Twitter adopter Patrick LaForge (@palafo) ‘dropped’ the code on endorsement in his Twitter bio in 2007. And it was avidly retweeted (and apparently endorsed) first by some other journalists, and quickly by the Twitter community at large.

And now it has effectively become Dutch law. The Context-case verdict explicitly states that because of the ‘RT ≠ endorsement’-code, a retweet is primarily not to be considered under article 131 as a potentially inciting message. But the judges formulate an exception to that rule: “if the suspect’s commentary reveals that he [sic] supports the content of the initial tweet, or if the retweeted message is in line with a sequence of the suspect’s tweets carrying a similar meaning to that of the retweeted message,” the retweet may still be considered an incitement and the suspect can be punished accordingly. Wings clipped?

The Context-case and its dealing with the use of social media in the context of terrorist organizations may just be a reflection of the state’s interest in oppressing the agitation of a mob-in-formation as it threatens to ‘rage against the machine,’ so to speak. And in defining the use of Twitter in accordance with the laws on incitement, the The Hague Court may simply have updated this interest for the digital media and social networking-context and communication techniques, as well as for contemporary ways in which terrorism organizes itself.

At the same time, there might be something about Twitter as a medium that makes the platform particularly apt for incitement. In an upcoming post on the phenomenon of ‘twitter shaming’ I will further develop my thoughts on rage as it resides in the Twitter-machine itself. Curiously, it might just be the case that the rage we encounter in that machine resembles some form of criminal prosecution…