A Woman of the People, Not a Politician

The Netflix documentary Knock Down the House is an ode to Alexandria Ocasio-Cortez and her female Democrat colleagues. Read more about the perfect campaign, making friends, and impacting the people.

As an academic and a classicist I’m confronted every day with the power of the establishment and the pull of tradition. In my work, I take a reflective stance; I like to analyse the process in which cultural or political movements root themselves in older institutions, and use historical role models as their seal of authority. The people who changed the world did it either very well or to the detriment of others, but as an academic I don’t (won’t) judge them.

I had a different experience when I was watching the Netflix documentary Knock Down the House aired in Europe May 3rd. It follows four female Democratic candidates during their campaigns for the midterm elections of 2017: Amy Vilela, Paula Jean Swearengin, Cori Bush, and Alexandria Ocasio-Cortez.

The official trailer of the documentary Knock down the house.

The candidate followed most closely is Alexandria Ocasio-Cortez, young, Latina, and originally a ‘working-class girl’ from the Bronx, as she keeps repeating proudly. She not only defeated the seasoned politician Joe Crowley but at 28 also became the youngest member of Congress. Ocasio-Cortez’ election campaign promoted Medicare for All, an improved immigration policy and a federal jobs guarantee. 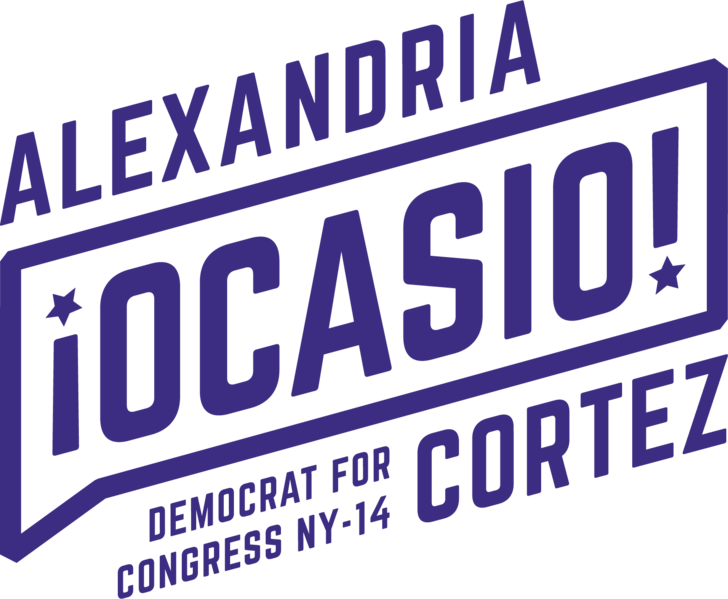 Now, her name is often associated with America’s Green New Deal, much hated by conservatives and hamburger lovers. She is accessible and charismatic. As befits a real leader, she shows vulnerability. One of the more powerful shots in the documentary is the moment when, preparing for a television debate with Crowley, she spreads her arms wide and says “I need to take up space”, “I need to take up space”. To fight against the establishment and to challenge a senior senator who has for the last twenty years never been challenged, you need to be able to fill the room. At the end of the film Ocasio-Cortez is sitting in front of the White House, deeply emotional because she has fulfilled her late father’s wish that she become a political representative. Of course she is crying, we don’t expect anything less of an American film. But that’s not the point. The point is that I was crying, too. I, who in fact started watching this documentary from an academic interest in political rhetoric and image-making. 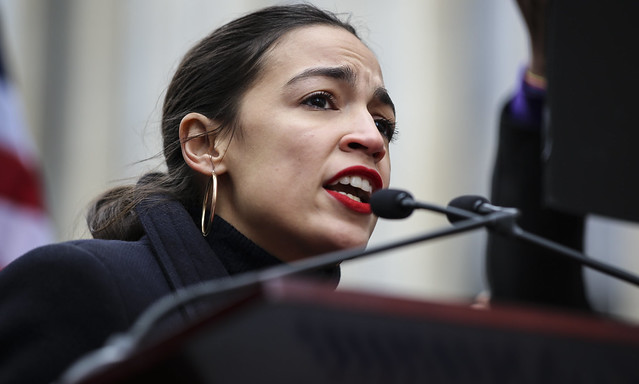 Alexandria Ocasio-Cortez speaking to the people at the NY Women’s March in January. AOC is a particularly lively speaker. Picture by Dimitri Rodriguez.

Why do we love Alexandria Ocasio-Cortez? For one thing, she is the Weberian prototype of a charismatic leader, who emerged to ‘save’ the people from a situation of crisis (i.e. unemployment and poverty, especially in New York, together with the lack of a political representative for the working class). Ocasio-Cortez also strongly believes that she has a calling. In the final seconds of her campaign video she asserts firmly: “it is time for one of us”, meaning the everyday New Yorkers. One of Ocasio-Cortez’ more popular tweets was a photograph of her new office sign, with the message that she’s still the regular girl next-door. This girl next-door knows her neighbourhood, knows who she is representing, and knows how to reach them. Ocasio-Cortez’ real talent is to acquire followers, particularly on social media, who confirm her leading role. One journalist suggested she is “not a politician, but a people’s representative”. Formally, there is no difference between these two functions, but Ocasio-Cortez has made it seem like there is.

Watching Alexandria Ocasio-Cortez’ campaign to Congress reminded me of a booklet written in antiquity (I’m still a classicist). In contrast to theoretical ideas about politics and politicians (in Plato, Aristotle, Cicero), little is said about the actual campaigning which politicians, then as well as now, had to do to gain influence. What is especially nice about this booklet, called A short companion to campaigning (Commentariolum petitionis in Latin), is that it is written for someone who is new on the political scene and, just like Ocasio-Cortez, came from outside the establishment. There are two things an up-and-coming politician (ready to knock something down) should place at the forefront of his thoughts, the author states (16): the support of friends and your popularity among the people. With concern to friends, the author says, you should in first instance turn to your relatives and family friends: if they support you wholeheartedly, you’ll be one step closer to becoming elected. Moreover, you should take care to make many new, preferably well-off, friends: offer them favours, respond to any expectations they might have of you, and arouse their sympathy. In order to make friendships, it is crucial to go door-to-door, visit many different people in different parts of the city. Basically, the whole country should know your name and programme, and you should know the whole country. These people, whether relatives or new supporters, should be seen with you at all times: followers should be visible. As concerns a candidate’s popularity among the people, you need to possess an ability to memorize names and to flatter, be perseverant, be munificent, arrange (a lot of) publicity, and, lastly, show your ambitions for the state. The author also believes that it is important to “be yourself” (42); if you’re acting, people will see. 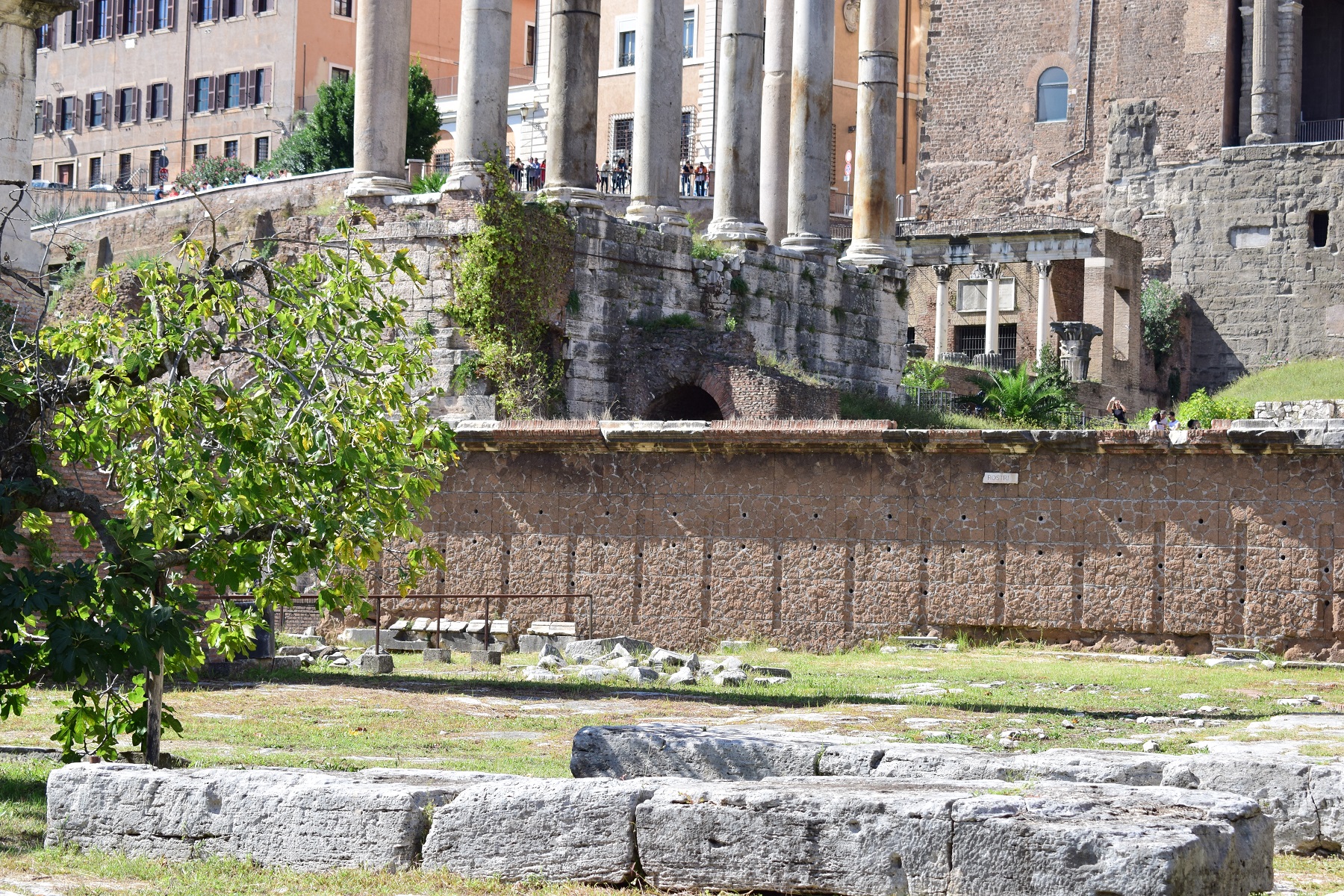 The remains of the ancient rostra on the Forum Romanum, in the heart of Rome. The rostra was the spot where statesmen addressed the people in so-called contiones, public assemblies. Photograph by author.

I don’t mean to be giving any spoilers, but the Alexandria Ocasio-Cortez of the documentary is seen to have it all. She is filmed sitting on her mother’s couch at a family night; her little niece assists her in handing out flyers on the street. Ocasio-Cortez spends entire afternoons knocking on people’s doors, telling them about her mission. When people react by saying they’ll vote for Crowley, a graceful thank you is the response. In fact, Ocasio-Cortez will acknowledge and thank anyone crossing her path. In front of the people, Ocasio-Cortez speaks proudly of her heritage, and proclaims a constant message of hope and political change. And, let’s face it, she’s a media star (read this article for a nice analysis of her Twitter talents). Social media are the ideal vehicle for not only publicizing one’s opinions but also one’s popularity: the amount of followers, re-tweets, or likes is for most people a quick indicator of a person’s merit. Most importantly, repeating over and over again that she’s just a girl from the Bronx directly plays into one of her biggest objectives: the participation of everyday people in politics. Ocasio-Cortez has made the strategy to ‘be herself’ part of her political programme. It might be the reason why she has befriended so many people on her way, and why she has finally befriended me.