Why spend your summer digging and carrying dirt? Because it’s both educational and incredibly worthwhile, that’s why. Renske Janssen talks about participating in the Kinneret Regional Project’s excavations at Horvat Kur (Israel).

For most people who work in the humanities, research is a strictly indoor affair. Our work usually takes place in offices, libraries, museums and the occasional archive, and unless we move between those locations we are rarely required to step out into the elements. Except, of course, when you participate in an archaeological dig – and that’s honestly something more of us should do if given the chance.

The excavations at Horvat Kur (which is located on a hill on the north-western shore of the Sea of Galilee) started in 2007, with the primary goal to explore life in rural Galilea from the first century BCE to the seventh century CE. In 2010, it became clear that the settlement not only housed a domestic area, but also a synagogue from the Byzantine period, which has since become the focus of the excavation. Ever since, a team consisting primarily of volunteers from the universities of Bern, Helsinki and Leiden, and various US universities (under the directorship of Raimo Hakola, Byron McCane, Stefan Münger and Leiden’s own Jürgen Zangenberg) has worked to uncover the building, and give students a chance to gain archaeological experience in the process. 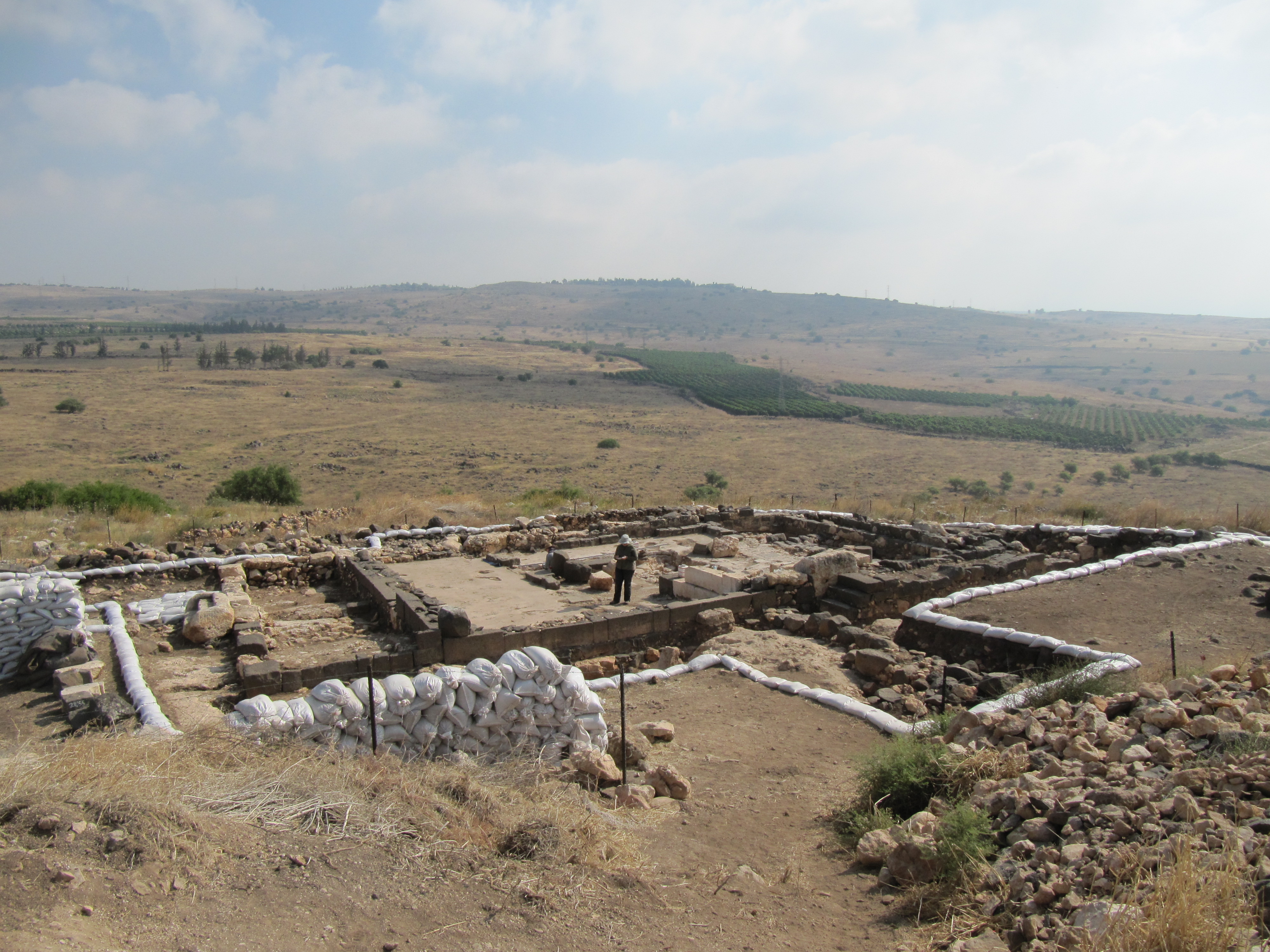 The synagogue at Horvat Kur seen from the Southwest in July 2018. The white line consists of sandbags and is used to indicate the edge of the excavated area in aerial pictures and protect it at the same time. Photograph by Renske Janssen.

I have twice participated in the excavations at Horvat Kur (in 2016 and 2018), and I’ve found that this type of experience is extremely helpful in a number of ways. Of course, practical experience is essential for those focussing exclusively on archaeological research, but it is also very useful for many whose work is oriented more towards history, art or literature. This is at least in some part due to the fact that there are few ways to come into more direct contact with everyday life in the society you’re studying, and even just being present in a specific region and seeing the landscape with your own eyes can significantly enhance your understanding. 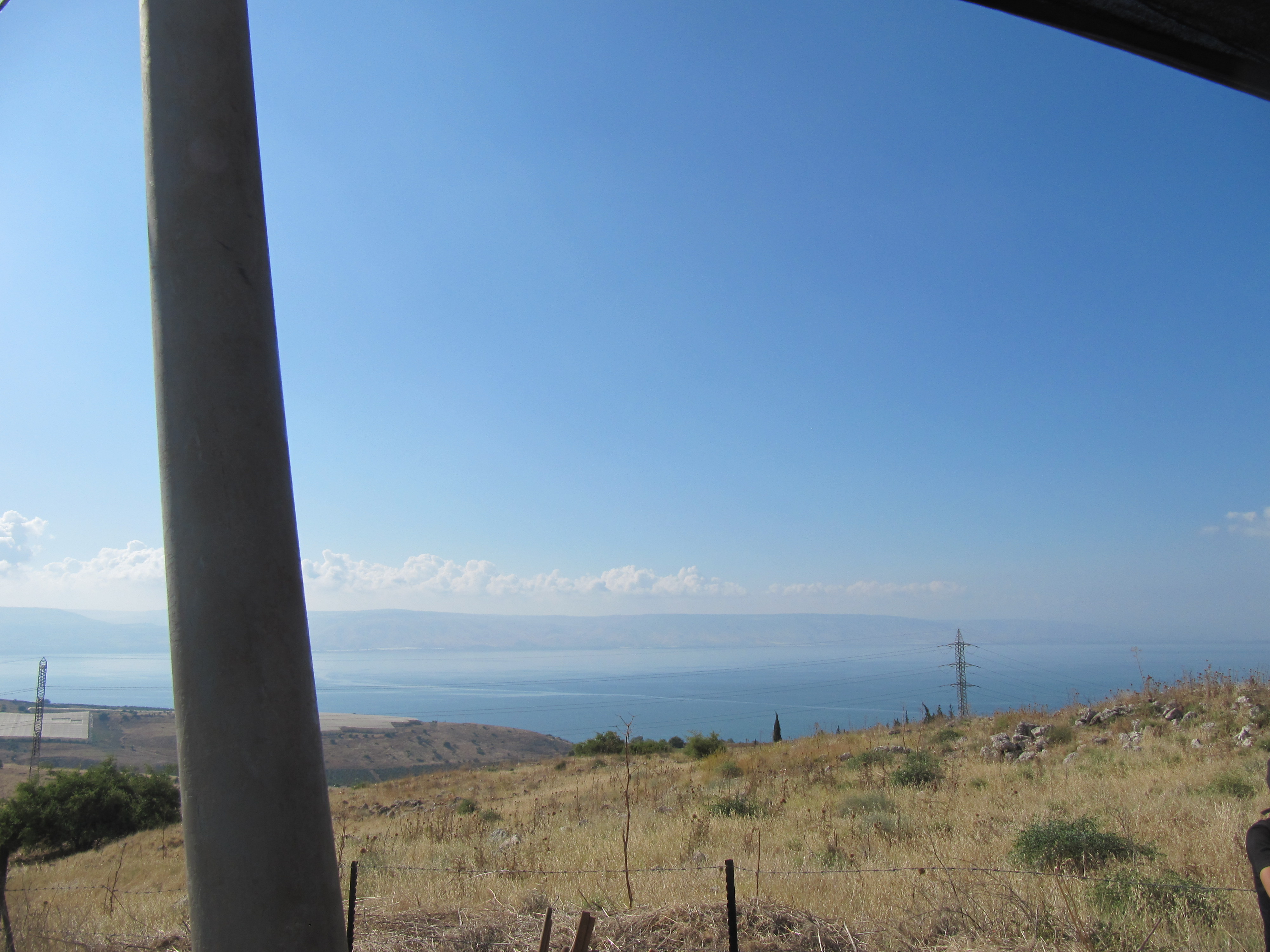 The Sea of Galilee as seen from Horvat Kur. The pole in the foreground is part of the tents meant to protect the team from the sun, which is an absolute necessity in this region. Photograph by Renske Janssen.

Of course, you can’t just step onto an archaeological site with a shovel in hand and expect to know exactly what is going on. Like all academic disciplines, archaeology has rules – and breaking those rules can significantly impact the validity of your research. It is important to remember, for instance, that everything you find in the first few centimetres of topsoil has to be treated with extreme suspicion. These layers of soil are still very much active, and it’s very likely that any objects you find there (even if they were made at an earlier date) are no longer in their original context. And context, in archaeology as in the humanities, is everything. This is why archaeologist do not simply dig straight down, but instead work through the soil layer by layer. These layers have to be kept more or less level at all times, to make sure that everything you find actually dates from approximately the same period. 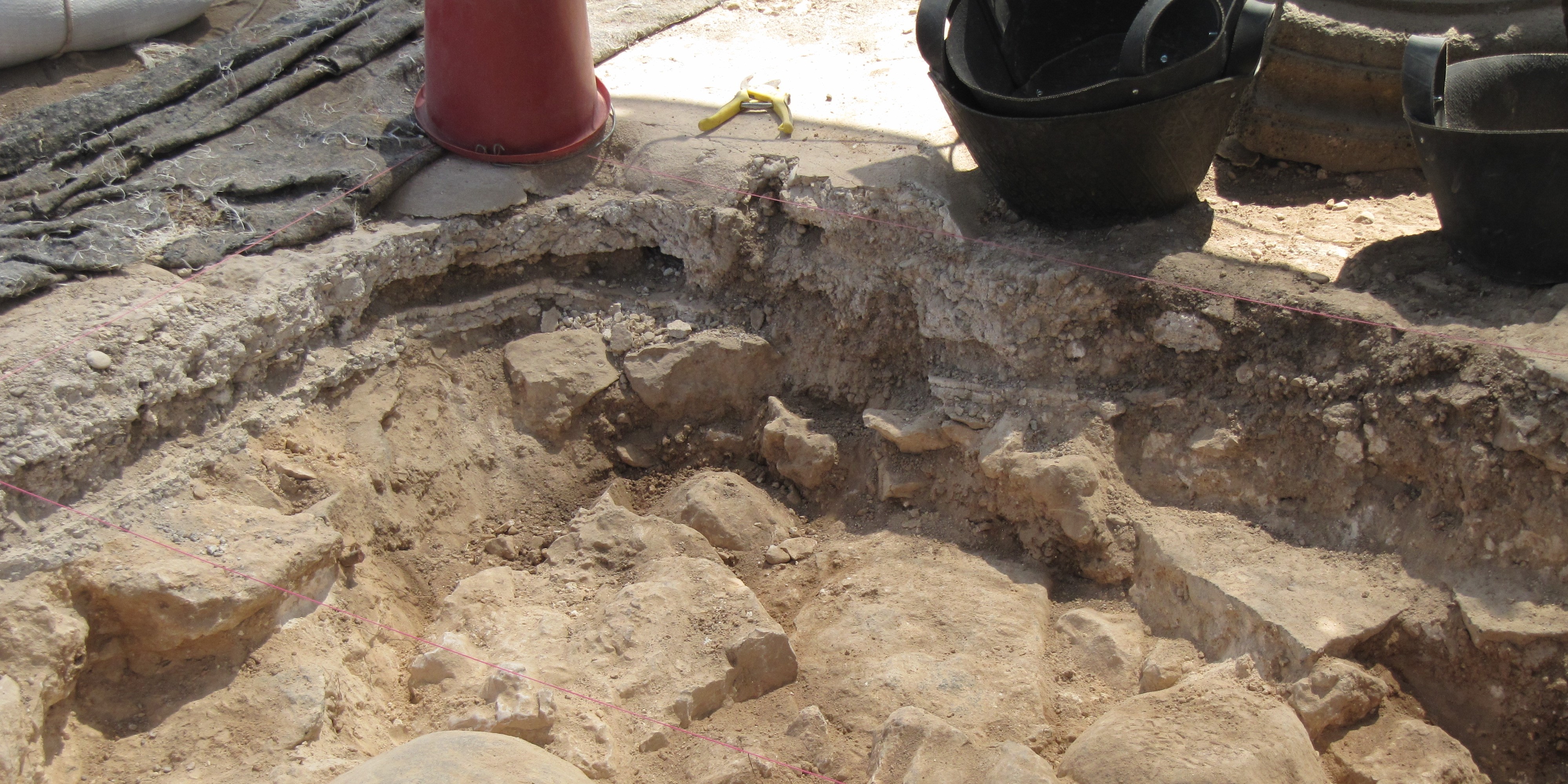 Visible layers in the edge of an excavation area, also known as a baulk (or balk). These baulks have to be kept as straight as possible, so that the stratigraphy can be clearly seen. Photograph by Renske Janssen.

This becomes especially relevant when datable objects, like coins or fragments of pottery, are found underneath architectural features, like walls, mosaics, or (as in the picture above) plaster floors. In those cases, the finds can help you to determine the approximate date at which this particular part of the building was constructed. If a coin depicting an emperor who reigned from (say) 161 CE is found underneath a wall, it follows that the wall was constructed after that date – a principle known by the Latin term terminus post quem (limit after which). 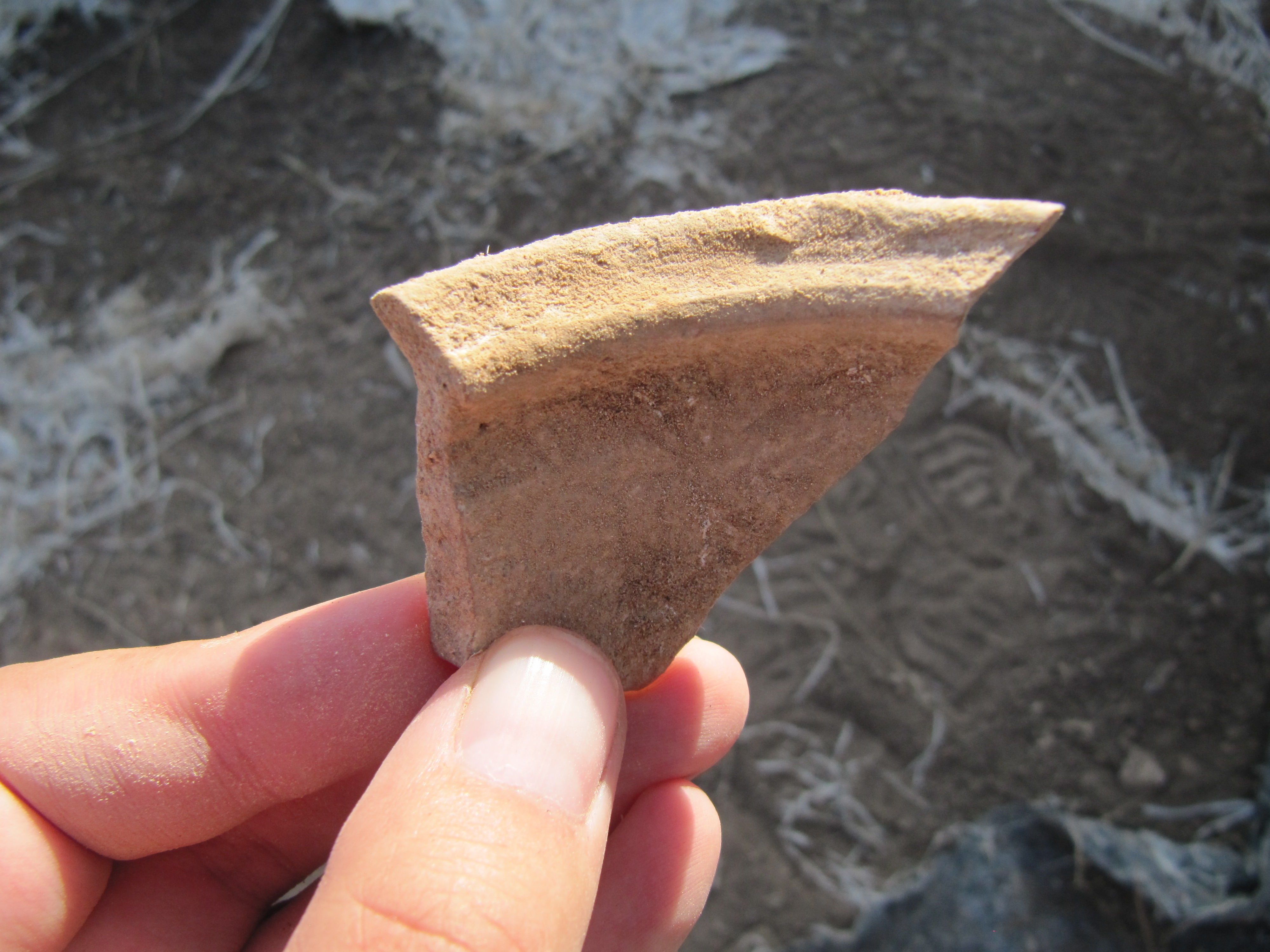 A fragment of pottery as found at Horvat Kur. This particular piece is the rim of a vessel. Pieces like rims and handles are particularly important because they are what is referred to as diagnostics – pieces that show the distinguishing characteristics of a type of vessel and can therefore be used to date the find. Photograph by Renske Janssen.

Of course, things are not always so easy. It can be difficult to interpret your finds and place them in a historical context, which means that the involvement of particular specialists is absolutely indispensable. The team at Horvat Kur therefore not only includes the student volunteers, but also –among many others- a ceramicist to analyse the fragments of pottery found during the dig, a numismatist to examine finds of coinage, an architect to study the structure of the building, and a paleoecologist to look for traces of animal life during the time of the settlement’s occupation. In addition, the site and finds are documented both by a photographer, and graphic artists and IT-specialists, who create reconstructions, maps, 3D-images and other things that help to visualize various aspects of the excavation. The registrar, furthermore, makes sure that all finds are properly labelled and catalogued. Sometimes, however, special circumstances arise. When a mosaic was found in the synagogue during the summer of 2015, this required the involvement of an expert from the Israel Museum in Jerusalem, who could safely remove the mosaic from its original location in order to move it to the museum for further study. 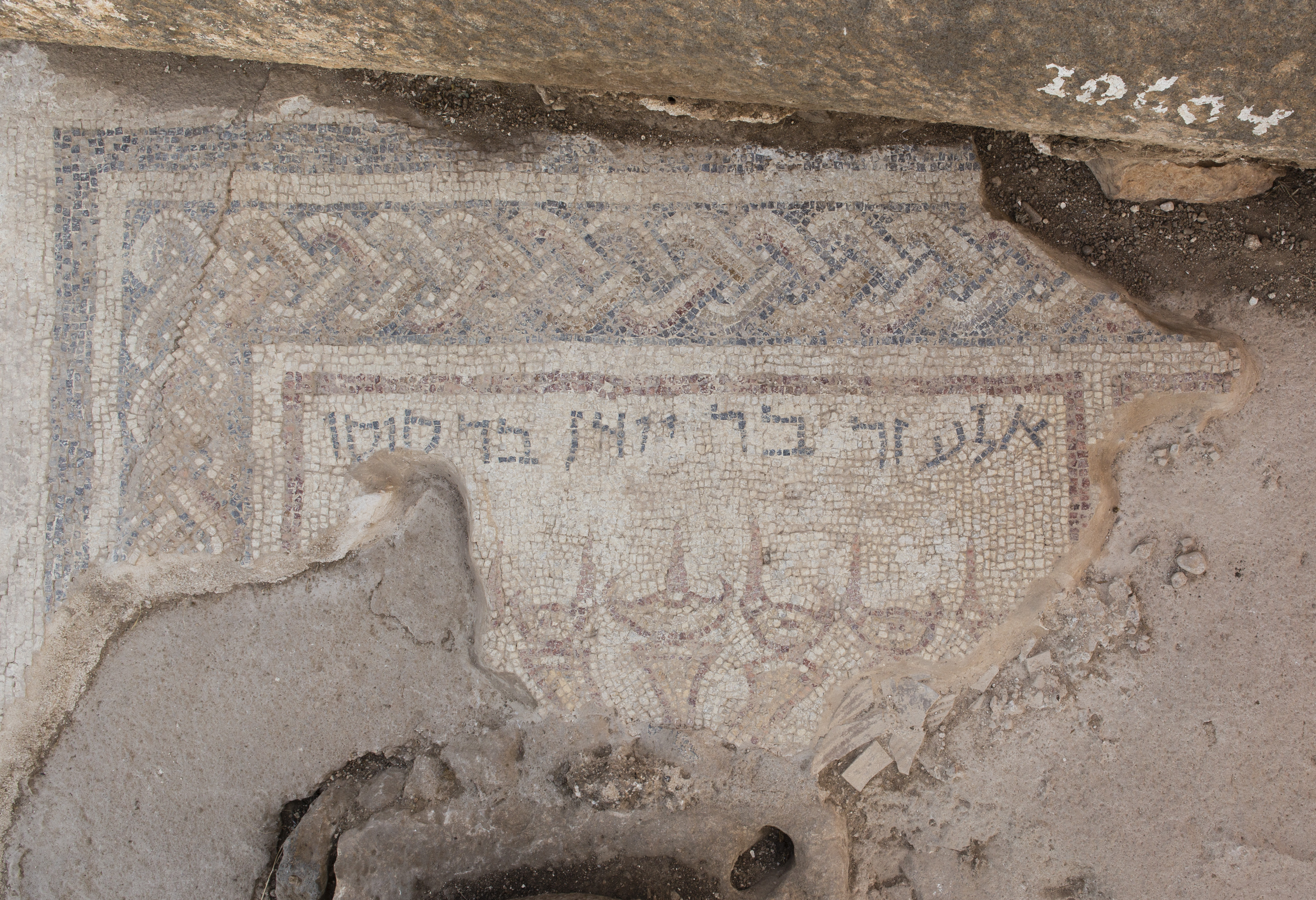 The mosaic found at Horvat Kur, which shows the name of the man who likely payed for its construction: El’azar, son of Yudan, son of Susu. The mosaic also shows part of a menorah. Photograph by Jaakko Haapanen and used with the permission of the Kinneret Regional Project.

Archaeological digs are intense environments, both physically and intellectually, but that is precisely the reason that they allow participants to pick up a wide variety of new skills in a short period of time. And those skills, in turn, can be very helpful in using archaeological material to flesh out the societal context of your own object of research, as well as in evaluating the arguments you encounter when doing that research. And that, I think, is beneficial to everyone. 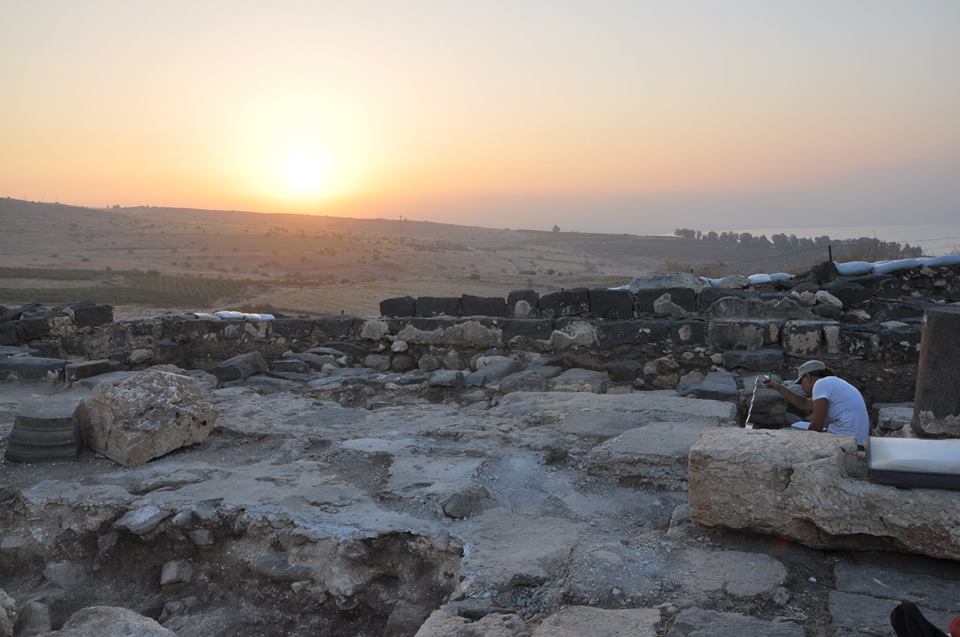 For more information about the excavations at Horvat Kur and larger Kinneret Regional Project, please check out the available bibliography.