Dolls as devotional aids, liturgical props and objects of desire: on the various ways medieval adults interacted with dolls and lifelike sculptures.

As the Advent period is approaching, you might soon encounter Nativity scenes, either the small stables for under the Christmas tree or the public ones with life-size figures or perhaps even real actors and animals. These scenes have their origin in the medieval period: as early as the twelfth century, Nativity re-enactments were part of the Christmas liturgy. Perhaps the most well-known record is from Christmas Eve 1223, when Saint Francis placed a crib in a cave between a living ox and ass. Perhaps he had placed a doll in the crib, for one of the witnesses claimed that “he saw a beautiful little boy asleep in the crib and that the blessed father Francis embraced it in both of his arms and seemed to wake it from sleep.” 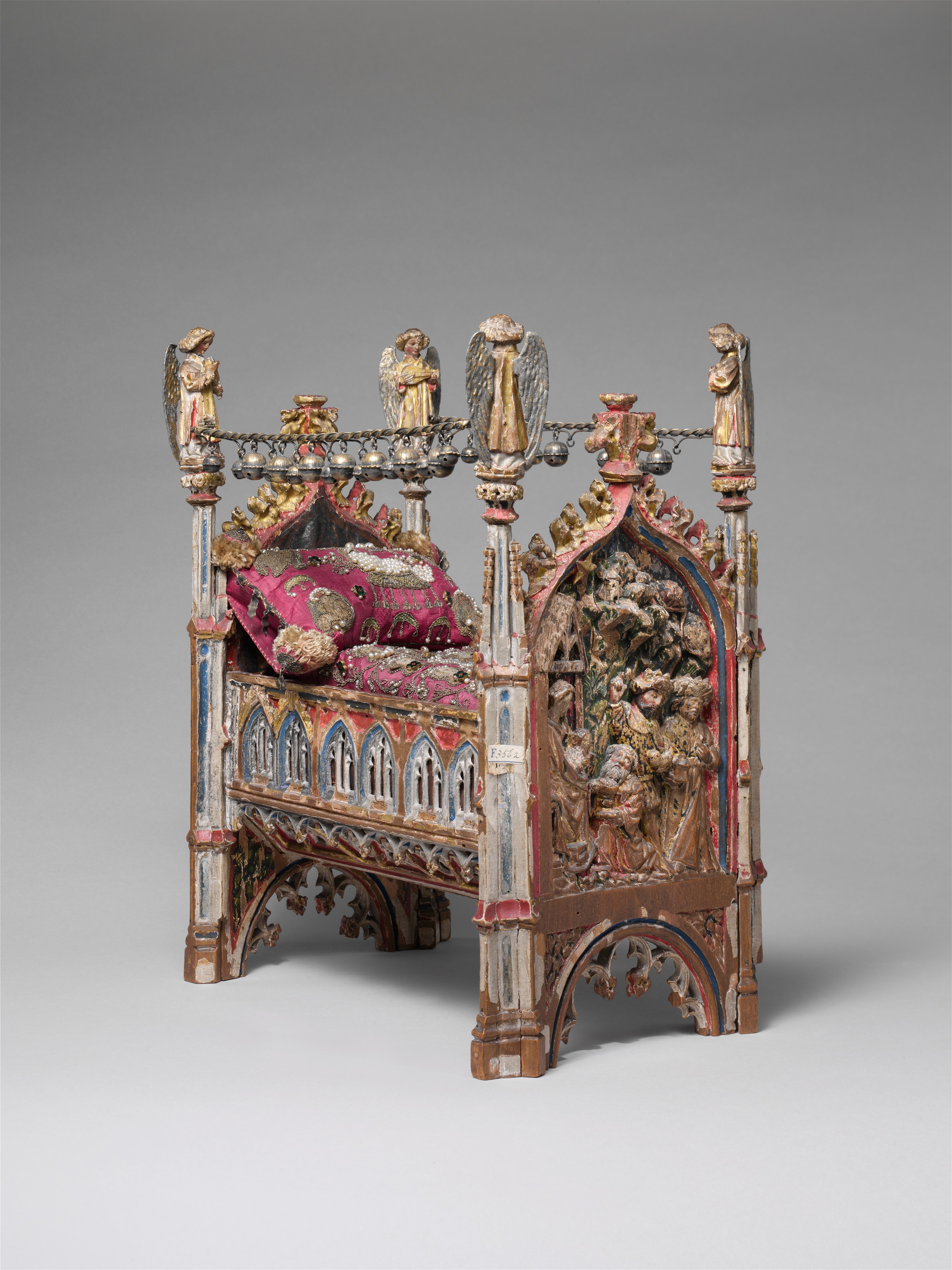 From the fourteenth century onward, dolls representing the Christ child and specially made cradles became part of the devotional practices of mainly religious and semi-enclosed women. While the larger cradles were made for use during the Advent period, smaller cradles and dolls were used in private devotion, mainly by religious women. These objects were often given to women as gifts when they entered the convent or beguinage. The booklet Vander gheesteliker kintscheyt ihesu (On the Spiritual Childhood of Jesus, 1488) provides us with a glimpse of the devotional practices in whch they functioned; the book explains how ‘one should swaddle the infant Jesus, lay him in his crib, bathe and wash him, play with him, rock him, lull him to sleep and sing to him.’ 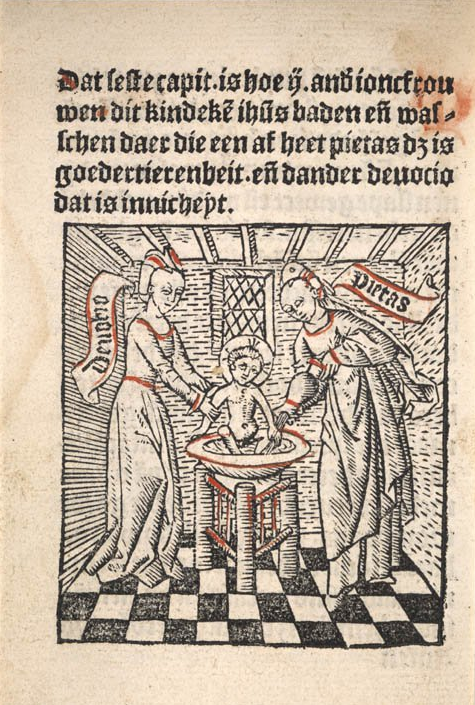 The cradles were made of wood and often had intricate carvings. They came with sheets and clothes to dress the Christ child. Some had little bells attached to them which rang when the cradle was rocked, or were decorated with flowers. Thus, ‘playing’ with the child and the cradle became a multisensorial experience with different fabrics and textures, ringing bells and flowers alluding to the sense of smell. This activation of the senses could bring the devotee in a spiritual state or even incite visions of the Christ child coming to life.

The latter happened to the Dominican nun Margeret Ebner, who received a Christ doll and cradle at Christmas 1344. She wrote about her visionary experiences involving the doll in her Offenbarungen (Revelations):

I have an image of the child, our Lord, in a cradle. I was so powerfully compelled by my Lord with great sweetness, longing and desire; and also by his request, because it was said to me by the Lord: ‘If you don’t give me to suckle, then I will take myself away at the moment you love me most.’ So I took the image out of the cradle and laid it on my bare breast, with great longing and sweetness; and felt then the strongest possible grace in the presence of the Lord.

Another time, the doll was making noise in the middle of the night, waking Margaret:

Then I said to him: ‘why won‘t you be good and let me sleep? This certainly isn’t how I ought to bring you up!’ Then the child said: ‘I will not let you sleep: you must take me on to you.’ Then I took him out of the cradle with great desire and joy and put him on my lap. Then he was a darling child. Then I said: ‘If you kiss me, I’ll forgive you for disturbing me.’ Then he threw his arms around me and held me and kissed me.

Margaret’s visions were not confined to interactions with her baby Jesus doll. She had the following experience with an image of the crucified Christ:

As I stood before the image, my Lord Jesus Christ bent down from the cross and let me kiss His open heart and gave me to drink of the blood flowing from His heart. I received much great, powerful grace and sweetness, which continued in me for a long time.

Margaret sees the image of the crucified Christ coming to life. This type of visions was quite common among mystics and visionaries, especially women. While the crucifix coming to life might be any images in the church or convent, one type of objects can be associated with these visions in particular: sculptures of Christ with some mechanism that allowed them to be moved. Two iconographical types will be discussed here: sculptures of the crucified Christ with moveable arms, and Christ riding the donkey. Both are connected to a specific liturgical or para-liturgical practice. 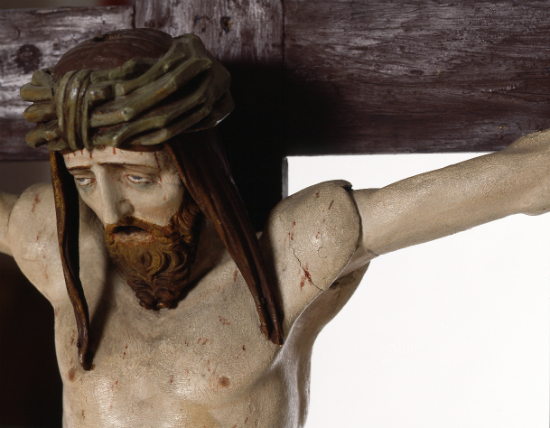 The oldest sculptures of the crucified Christ with moveable parts date from the fourteenth century. They were used on Good Friday in the liturgical ceremony Depositio crucis. The sculpture was taking from the cross and placed in a coffin, for which purpose the extended moveable arms had to be bent down. Sometimes not only the arms but also the knees, head, eyes, and mouth could move, heightening the realism of the sculpture’s movements.

Sculptures of Christ on a donkey, also called ‘Palmesel’, were used in the Palm Sunday ceremony Processio in Ramis Palmarum, enacting the entrance to Jerusalem. The sculptures were accompanied by people singing and carrying palm branches, sometimes throwing them over the image. Christ and the donkey were life-size and often placed on wheels. 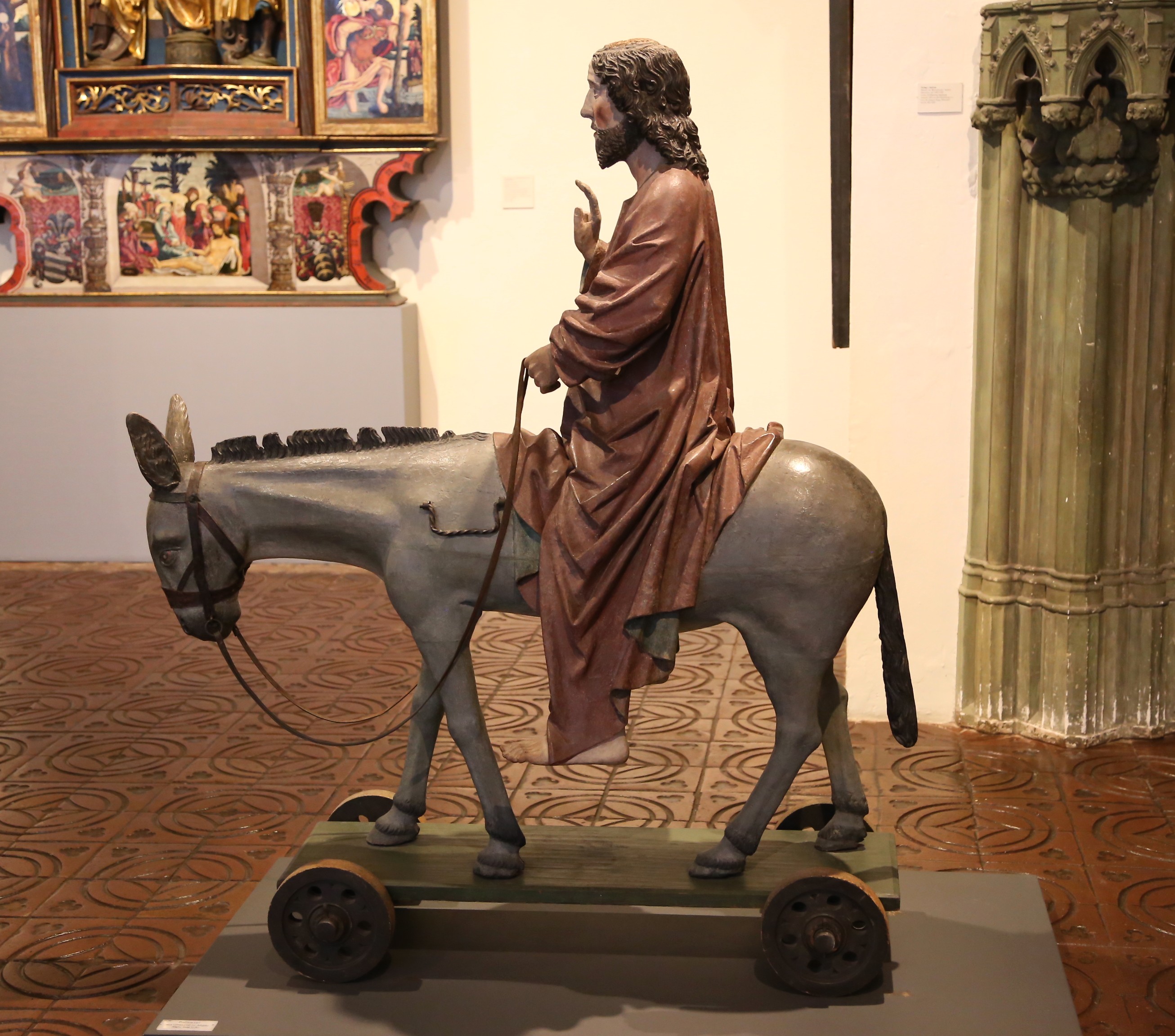 One could wonder whether it makes sense to call these larger sculptures ‘dolls’: would it not be more accurate to call them liturgical props? This is indeed their primary function, but as Margaret Ebner’s visions show sculptures of the adult Christ could perform a role in the imagination and visions of medieval devotees that is similar to the Christ dolls. Our modern notions of ‘doll’ and ‘sculpture’ are inadequate to describe their medieval devotional and liturgical uses.

This impression is strengthened when we look at the small and cheap pipe clay and terracotta figures that were produced in the fifteenth and sixteenth centuries. These include little cradles and figures of the Christ child with moveable arms, perhaps allowing them to be dressed, but also loose figures that could be put together to compose a Calvary crucifixion scene. Although the latter example may seem to lack the playfulness of the baby Jesus figures, in both cases we can speak of a very hands-on type of devotion. 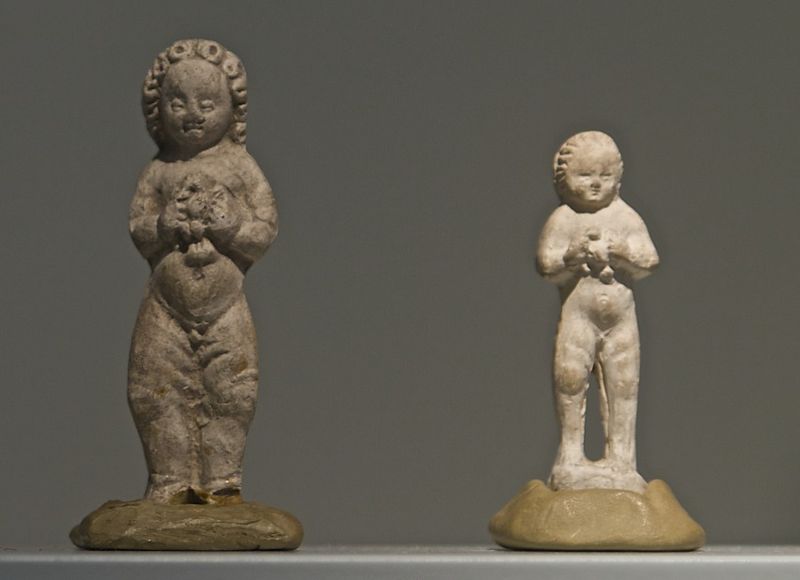 Margaret Ebner felt a strong desire for the image of Christ, but this desire was mystical rather than sexual. Still, her visions raise the question whether medieval images could also incite worldly desires. Ovid’s story of Pygmalion, who fell in love with an ivory statue he had made and brought it to life by kissing it, was well-known in the medieval period.

An especially intriguing example of a medieval ‘sex doll’ can be found in the romance Hunbaut, as shown by Melissa Swan. The title hero is the assistant of Sir Gawain. Looking for his lost master, he comes across a castle where the lady keeps a life-size model of Gawain in her bedroom. She keeps this image because she is in love with the knight, and when she thinks of him at night the statue gives her comfort. Unfortunately, no material evidence of Sir Gawain sex dolls has been found to this day.

Kamil Kopania, Animated Sculptures of the Crucified Christ in the Religious Culture of the Latin Middle Ages (Warsaw 2010).

Max Harris, ‘Wooden Christs on Wooden Donkeys (Frequently on Wheels): A Short History of the Palmesel in Germany, Italy, and Bolivia.’

Melissa Swan, ‘I Really Need to Tell You About This Life-Sized Sex Doll of Sir Gawain,’ History Buff, 2016.

This post was first published on the Leiden Medievalists Blog.