In this second blog, I discuss why Spanish plays were so eagerly translated and adapted by Dutch authors. It seems that Spanish repertoire formed a reaction of sorts to the staid plots of Vondel, Hooft, Coster, and Bredero.

[…] rather take a Spanish play,
Those are naturally turbulent, and please the masses.

In 1689, Andries Pels delivered critique on the fifty years preceding his appointment as director of the Amsterdam Municipal Theatre. He had disliked Jan Vos’s literary policy and the spectacle he had introduced in the nineteen years that he had been director himself (1647-1667). For good reason, Vos’s motto was ‘seeing comes before saying’. Among the plays that Vos had programmed time and again were the plays of Spanish origin. Those plays were misshapen in any way, if we are to believe Pels:

Behold ‘’t Verwarde Hóf, the Dolheid,
Lowies de Vargas, the Veranderlyk Geval;
Their disposition is wild in space, and time, but all
The world praises the subject matter, scholars and laymen alike.
[…]
One can see loyal Love, and desire for prestige commonly
Counteract each other; one hears honourable speech
In favour of duty, and honour, disfavouring deficiencies;
Thus, they bring the spectator divertissement,
Although they are out of square.

Although Pels could see how these Spanish plays pleased the larger audiences, it struck him that the plays were ‘badly’ written. He took it upon him to rewrite the plays before reintroducing them onto the stage of the Amsterdam Municipal Theatre; alternatively, other plays were silently removed from the repertoire.

In the 1610s, G.A. Bredero and Samuel Coster had already discredited Theodore Rodenburgh for his adaptations of Spanish plays, and in the 1670s and 1680s, a new generation in favour of French-Classicism repeated their aversion to plays that did not conform the classical rules.

In general, there existed an opposition between on the one hand the taste of the Dutch audience and Jan Vos, who catered for the masses, and playwrights such as Pels, who thought that literature could only be appreciated, if certain literary rules were applied.

In the early seventeenth century, Coster’s, Bredero’s, Hooft’s, and Vondel’s Senecan-Scaligerian plays were considered great plays (and they still are considered to belong to the best that Dutch literature has to offer). After 1670, the French-Classicists added still other plays. Between these two periods of time, there existed for a while the opportunity to experiment with another perspective on playwriting. We can witness, as such, two ‘emotional turns’ in the Dutch seventeenth century: first from emotional restriction (Coster, Bredero, Hooft, Vondel) to the celebration of emotions (Rodenburgh, Vos, and others), and then again back to emotional restriction (Nil Volentibus Arduum).

In a time that the Dutch Republic had just freed itself from the so-called Spanish yoke and was dealing with an internal civil war (1609-1621), the Senecan-Scaligerian drama served as a way to rationalize trauma’s and other emotions: ‘one was meant to ponder on it, not weep about it’, says Mieke Smits-Veldt in her 1991 study on Dutch Renaissance theatre. The new political reality had to be legitimized and accepted. Drama helped shape a new Dutch consciousness and identity.

We can see this rationalisation taking shape in Hooft’s Geeraerdt van Velsen (1613) and Baeto (1617), Coster’s Polyxena (1619), Vondel’s Gysbreght van Aemstel (1637) and Jeptha (1659). These are just a few examples, but there are many more. All these playwrights took position in the debate on emotions: only when reason governed the senses, the commonwealth was best served. During the truce of 1609-1621 this was in theory a common aim of all Dutchmen, but in practice people of different religious and political denominations fought each other fervently, with words and more lethal tools. Senecan-Scaligerian drama was a product of its time, a time when Dutch society was in dire need of concord, unity, and loyalty to the government. Drama was made into political propaganda to harbour these virtues.

However, as with all dominant cultures, there are also counter voices that are preferably suppressed, denied, or marginalized. Drama of Spanish origin still managed to become the most popular genre for a while, despite it being the foremost and most successful expression of a hostile culture.

Spanish drama harboured characteristics that went against the dominant ideas about emotions in the seventeenth century. Emotionality was not shunned by the adaptators of the Spanish plays.

In Spanish drama, the rules are often broken. Women are, for instance, not the passive and ‘hysterical’ beings as they have been often typified in Dutch plays. Therefore, women are more than once the main protagonists: Casandra is the title hero of Rodenburgh’s Casandra en Karel (1617), Celia is likewise the hero of Celia en Prospero (1617). In Jalourse Studentin (1617), women wear men’s clothes as to confront the males, who have mistreated them. 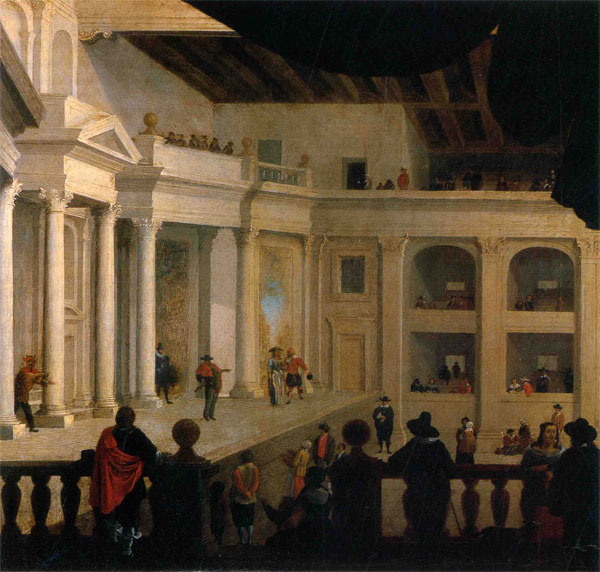 In the 1640s, more playwrights begin to adapt the Spanish plays. Among those authors is Leonard de Fuyter, who translated Antonio Mira de Amescua’s El palacio confuso as Verwarde hof (1647). The play confronts the audience with an intricate set of events: Queen Matilde needs a husband, she marries Carel. Carel turns out to be a tyrant. Matilde invites Henrico who looks exactly like Carel (they are in fact twin brothers). Henrico will secretely turn every tyrannical decision of Carel back. Carel turns crazy, and Matilde takes back her throne. The events follow quickly after each other, and the audience is presented with a confusing, but exciting plot. Meanwhile, all characters are not afraid to act on their feelings. That is the strength of the Spanish plays.

However, Pels disliked the plays and removed them from the repertoire, in favour of French translations of plays by Racine and Corneille.