Loredana Pazzini-Paracciani: “This project was an amazing opportunity to grow professionally"

Loredana Pazzini-Paracciani is curator of the exhibition 'Diaspora: Exit, Exile, Exodus of Southeast Asia' in the MAIIAM Contemporary Art Museum. Leonor Veiga interviewed her about the exhibition and her experience as a curator.

The MAIIAM Contemporary Art Museum is a private institution which opened in July 2016 in Chiang Mai, Thailand. Resulting from the collection initiated thirty years ago by Jean Michelle Beurdeley and his late wife Patsri Bunnag, together with their son Eric Bunnag Booth. Currently, it holds the large-scale exhibition Diaspora: Exit, Exile, Exodus of Southeast Asia, curated by London-based Loredana Pazzini-Paracciani. For this project, Pazzini-Paracciani equally served as editor of the academic publication bearing the same title which will be launched in MAIIAM on May 19, 2018.

Loredana Pazzini-Paracciani has devoted her curatorial and research practice to Southeast Asian art for the past 10 years. Based in London since 2015, Pazzini-Paracciani is currently following a second MA program at the School of Oriental and African Studies (SOAS) on History of Art and Archaeology (she holds a Master in Asian Art Histories from the LaSalle College of the Arts, in Singapore). This program allows her an in-depth theoretical framework from which she develops her contemporary art approach.

Tell me, how did the show Diaspora: Exit, Exile, and Exodus of Southeast Asia, your large-scale show at MAIIAM, come to be?

In the end of 2016, in one of my research trips to Thailand, I spoke to Eric Bunnag Booth, the museum owner, about the possibility of presenting an exhibition about the overarching theme of Southeast Asian diaspora. As Eric was interested in this topic, this has since been a real collaboration between me and MAIIAM. When we first discussed the exhibition proposal, the publication which now accompanies the exhibition, was not yet planned. However, during the process of development of the exhibition both Eric and I realized the need for a publication that could expand the topics started by the exhibition further. 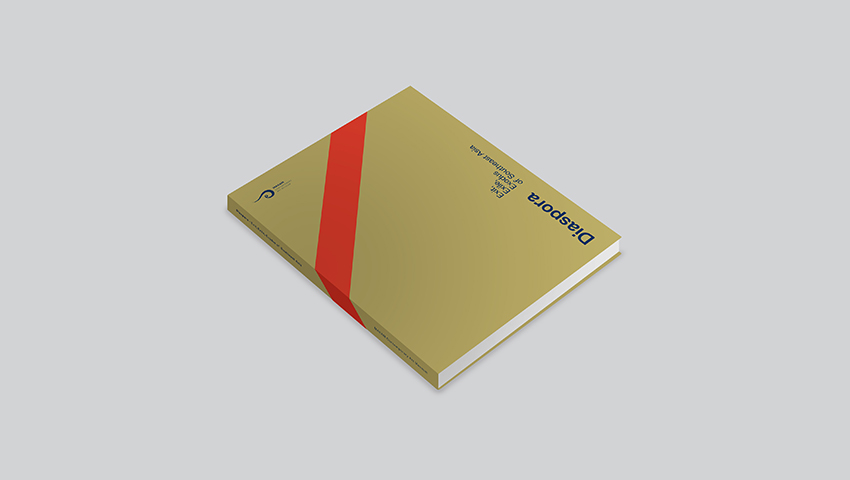 The publication, which will be launched on May 19 at the MAIIAM Museum in Chiang Mai.

Last year we talked about another group exhibition from Southeast Asia that you organized for the Queens Museum in New York, Architectural Landscapes. Was the experience of working with a Southeast Asian institution similar or different from collaborating with a Western institution?

This was a very different experience. In New York, I had proposed the show to the festival, and thus worked in collaboration with the Festival Director. Here, I worked collaboratively with the MAIIAM team, and especially in close contact with Eric. Another major difference between the two projects relates to their funding. In the arts, projects do not happen unless there is substantial financial support. For Queens, I developed my own fundraising activity. The costs of the show were covered by an incredible number of individuals and companies. For this show, MAIIAM supported financially the project and the artists. They acquired some works featured in the exhibition to integrate their collection. The fact that this is a privately-owned museum allowed a greater freedom to explore complex topical issues such as exile, and the social consequences that result from it. This project was an amazing opportunity for me to grow professionally, and as such I am very grateful for this collaboration with MAIIAM. Across all the projects that I have been so fortunate to work on thus far, I realized that everything is possible if you strongly believe in each project, and if your work ethic is driven by passion and determination.

This exhibition comprises 25 works by 18 Southeast Asian artists based in the region and also outside of it. Are the artists an embodiment of the exhibition’s tripartite analysis on Exit, Exodus and Exile?

The methodological framework of DIASPORA: Exit, Exile, Exodus of Southeast Asia pivots on the notion of diaspora as a travelling term, hinging on the concepts of movement and transformation. These terms are reflected in the artworks, which are taken as starting points to historicise collective and autobiographical accounts of migratory experiences. Exit, Exile, Exodus in this context point to three essential moments of the diasporic movement, which are used as methodological references or curatorial propositions in this exhibition. These terms have emerged from research and also from long conversations with the artists.

For instance, works such as Far from Home (2017) by Thai artist Paphonsak La-or or the Attentions series (2012-2014) by Thai artist Pao Houa Her, emphasise on the notion of exile. Far from Home is a series of portraits of political exiles and as such discusses the position of the individual in history. These portraits are displayed in the ground floor gallery of MAIIAM facing Attention, a photographic series by Hmong-American artist Pao Houa Her. Unlike Paphonsak who lives in Thailand, Pao is herself exiled in the United States. After the North Vietnamese forces capture of Saigon(now Ho Chi Minh City) in 1975, Pao and her family were sent to refugee camps at the border between Laos and Thailand, and later relocated to the US. Her portraits claim recognition to Hmong Veterans who fought the American-Vietnam War alongside American soldiers. Official oblivion resulted in a self-practice in which they emulate themselves as seen in American ceremonies, through objects they acquire in second-hand markets. Both series deploy the portrait genre to ‘memorialise’, so to speak, those who after leaving their homelands, became deterritorialised.

The IDPs series (2016) by Thai artist Jakkai Siributr, for instance, tackles the consequences of exit. These four panels tell us the stories of Myanmar’s displaced people through the visual language of folk art. Through their hands — Jakkai’s embroidery assistants are many times members of marginalised communities that seek economic refuge in Bangkok, where the artist lives and works. Thus, in how works, he speaks about the exodus that large populace endures in Myanmar. These works combine with those of Myanmar artist Sawangwongse Yawnghwe. His large-scale installation Spirit Vitrines (Memoirs of a Shan Exile) (2016-2017) further denounce the terrible humanitarian conditions that Myanmar exiles face when in movement.

On another note, Thai artist Nipan Oranniewesna’s video installation Signal (2016) broadcasts the alternating presence and absence of a Myanmar migrant worker, thus referring to various economic challenges that Southeast Asians face when they voluntarily exit their own countries.

For this show, you equally served as editor of an academic publication in which the theme of diaspora is analysed by Southeast Asian scholars. How did the publication contribute to the exhibition, and in what way does contemporary art benefit from academic discourse?

In the process of organizing the exhibition, it became apparent to both MAIIAM and I that the exhibition itself was only one part of the project. Our intention was to raise visual attention to topics of migration and displacement, and to get the conversation going. So in line with MAIIAM’s sustained interest in research and education, we embarked on the publication component. This book complements, and perhaps extends, the debate initiated by the exhibition. In addition to the 18 artists featured in the exhibition, we invited 5 writers, each an expert in his or her own field of research to write for the publication. Together, their insights are as multifarious as Southeast Asian diaspora.

The publication is structured in 2 parts: 1., the essays which anchor reflections on diaspora in present-day Southeast Asia as a physical, conceptual and religious space of transformation, and 2. we present artist works, alongside with accompanying texts. Both the exhibition and the publication are 2 sides of the same coin, interconnected and interdependent. The publication complements what is exhibited in the museum galleries, to hopefully foster a further, much-needed dialogue on diaspora as a site for productive thinking.

Thank you Loredana for referring to these issues and showing how artistic practice and academic thinking can converge and create a compelling discourse. I wish you success for your upcoming projects and thank you for your interview again.