On Demons, Clay and Greek Mythology: A Visit to Nuclear Belgium

On October 27, I went underground. Together with thirteen volunteers I descended into the bowels of HADES, the Belgian HADES to be precise. We encountered no lost souls, but a heap of apparently very interesting clay instead. Belgium puts good money into researching this clay, not for spiritual reasons, but because it may offer just the right conditions for a deep geological repository to dispose of Belgium’s high-level radioactive waste. HADES is an underground research laboratory that was built close to the sleepy town of Mol in 1982 to study the feasibility of geological disposal. It was the first of its kind and to my knowledge the only one in the world that fosters a cooperation between the sciences and the humanities in a research programme on nuclear waste disposal. This made me curious and I was lucky enough to find the support of the Environmental Humanities Center to organize a day excursion to the site as part of the Nuclear Waste Weeks that I organised together with my colleague from the École des Hautes Études en Sciences Sociales (EHESS), Kyveli Mavrokordopoulou.

The laboratory, named suggestively after Hades, the Greek god of the underworld, consists of several galleries 225 metres below the ground, the longest of which measures 180 metres. From these galleries tests are conducted to measure for instance the migratory behaviour of radioactive particles in Boom clay, the material that due to its water impermeability and plastic qualities is a promising candidate to isolate humanity’s most toxic waste from the world of the living for at least 10.000 years. Both Belgium and the Netherlands have a several hundred meters thick layer of Boom clay underneath their surface. 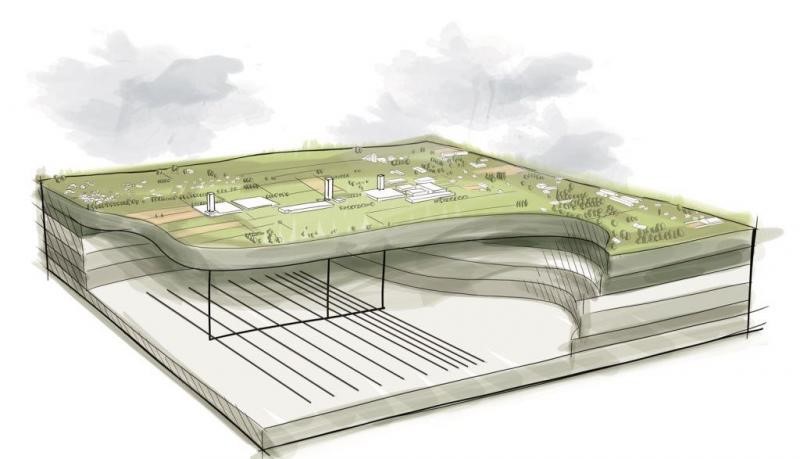 It is a tradition, the guide explained to us, to choose names from Greek mythology for the projects and institutions that conduct this kind of research. The laboratory, for instance, is managed by the economic interest grouping EURIDICE, named after a figure in Greek mythology who was killed by a snake while escaping from a man, Aristaeus, who tried to rape her. What I find a remarkable feat of the marketing department is that all these names are also acronyms. The name “EURIDICE” stands for “European Underground Research Infrastructure for Disposal of nuclear waste in a Clay Environment,” while HADES means “High Activity Disposal Experimental Site.” 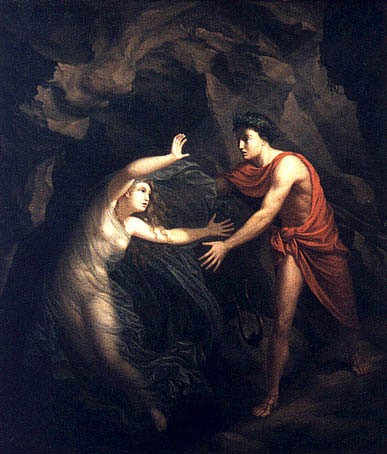 While for the research staff it seems merely a play with words, it did not escape my attention that the story of Euridice, with its tragic turns, gets right at the soft spot of deep geological disposal. After her death, the myth goes, Eurydice’s husband Orpheus wants to claim her back from the underworld. The gods grant him his request, but under one condition: he must walk in front of his wife and may not turn around until they both reach the world of the living. Just as he steps out into daylight, doubt befalls him if Hades did not deceive him. He turns around to see if his wife is really following him and Eurydice, who just arrives at the threshold that separates the world of the living from the world of the dead, is pulled back into the darkness of the underworld. The HADES project aims to isolate radioactive waste by storing it in the Belgian underworld, to stick with the image. But what if humans in the future don’t trust this grave? Or, even worse, what if they misread the signs and assume underneath this highly engineered tomb the hidden treasures of past civilisations, just like people did with the Pyramids of Gizeh?

HADES does not have an answer for this kind of questions. Their task is to bury the waste, not to prevent future humans from digging it out again. Even more interesting, therefore, was the exhibition “Perpetual Uncertainty: Contemporary Art in the Nuclear Anthropocene” at the Z33 House for Contemporary Art in Hasselt that we visited in the afternoon. Featuring international artists from Europe, the US and Japan, the exhibition traces the allegorical path of doubt and uncertainty of Eurydice’s story in the atomic age. Originally conceived by Ele Carpenter and exhibited at the Swedish Bildmuseet in Umea in 2016, the show has travelled to Belgium this September. Thereby, its display underwent some adjustments to respond to the Belgian nuclear debate. (For a review of the Swedish exhibition, see my previous blog post.)

Belgian artist Cécile Massart, for instance, created several circles from brightly coloured loose pigment on the exhibition floor and put a wooden trestle over each, so no one would walk on them. As the title of her work Colours of Danger for Belgian High-Level Radioactive Waste gives away, the circles allude to the logic of repository markers to keep people away by signifying danger. By the time I visited the exhibition, a bit more than a month after it was opened, the floor is covered in colourful footprints – a vivid enactment of the doubtful success of this marking strategy. 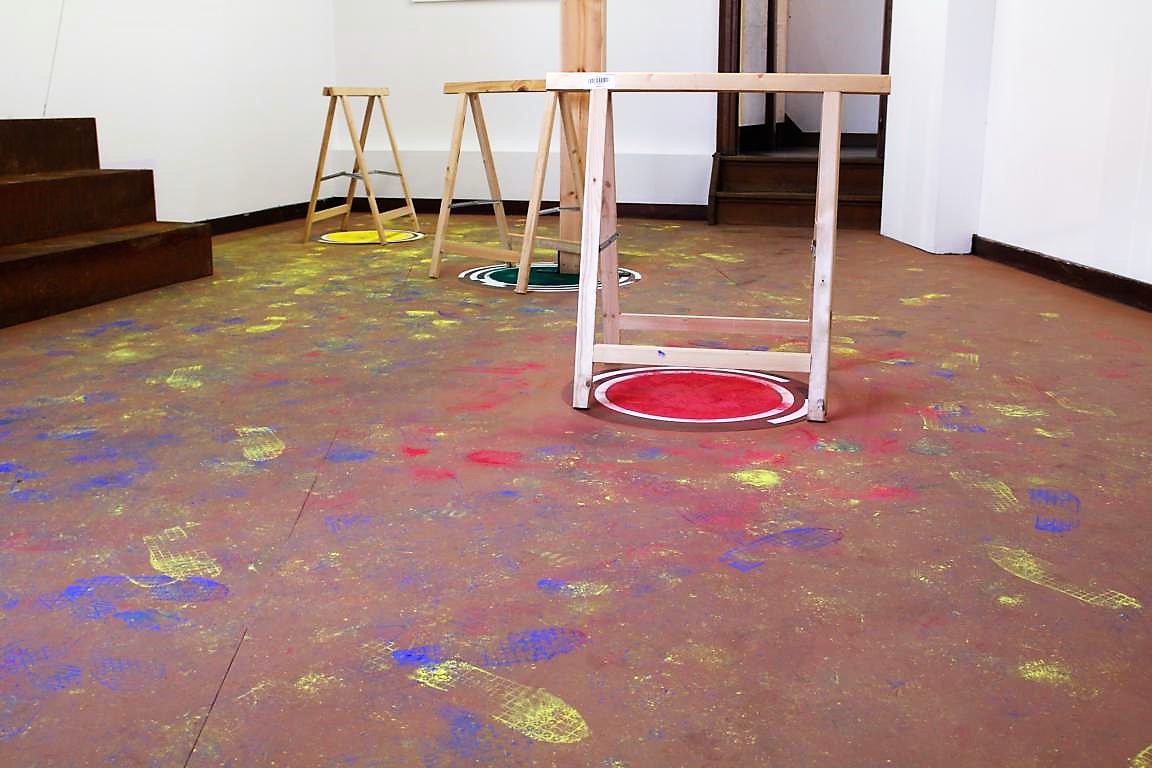 Another work that comments on the Belgian debate of geological disposal is Andy Weir’s collection of 3D printed plastic figurines. The work’s title, Pazu-Goo, refers to the ancient Sumero-Babylonian demon of contagion Pazuzu that he took as a morphological template to recompose, in a collaborative effort, various gooey figurines with random body parts of scanned museum objects from all over the world. The figurines are supposed to be encased in clay tablets (the same promising clay that is researched at HADES) and buried around the low-level radioactive waste repository close to the Belgian town of Dessel, perhaps to be rediscovered as oily remnants by future archaeologists.

The semiotic and material instability of these ‘anti-markers,’ as Weir calls them, critiques the assumption of traditional repository marker designs to outlast the many half-lives that the nuclear cargo of the repository takes to decay to background radiation levels. But it also suggests engaging with and taking responsibility for the possibility of future encounters between humans and leaky radioactive matter, something that current debates on deep geological repositories and repository markers only insufficiently address. 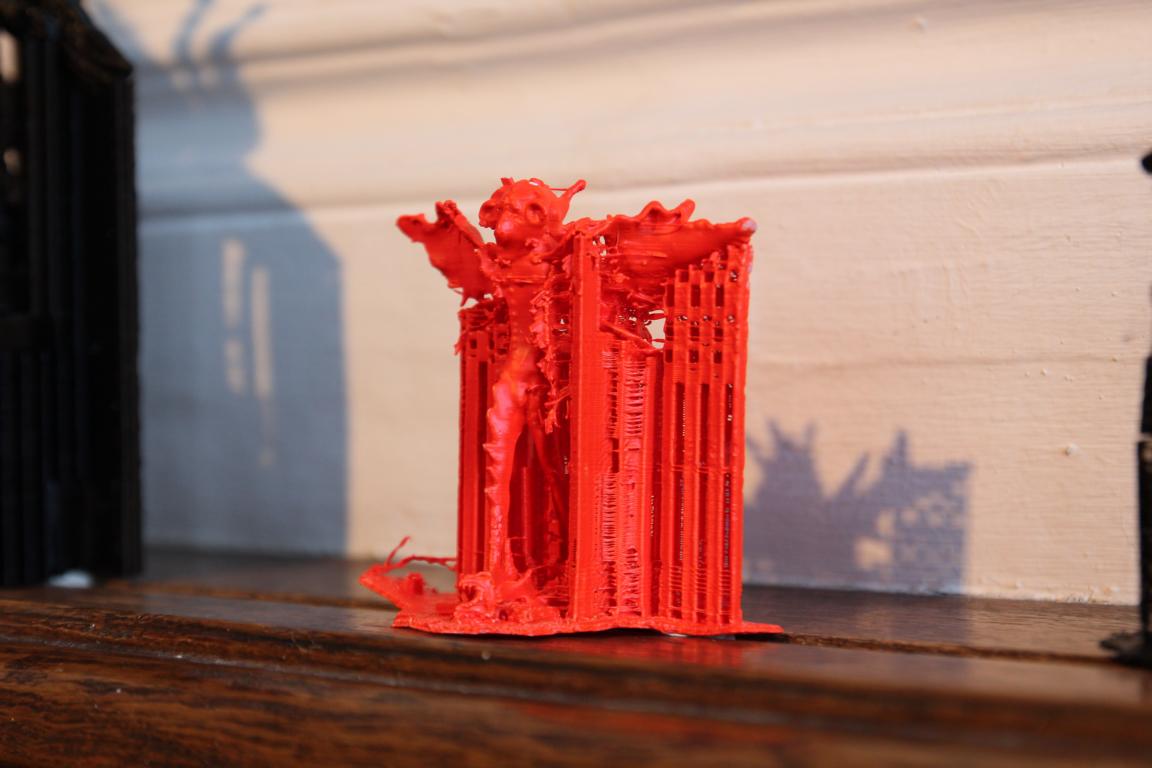 For further information about the debate on responsibility and geological repositories and repository markers, see: