The inhuman and the political in HBO’s Chernobyl

HBO’s new miniseries Chernobyl, a dramatization of the infamous accident at the Chernobyl Nuclear Power Plant, raises some interesting questions about the inhuman character of radioactivity, and the way in which this relates to the sphere of the political.

After the debacle that was the final season of Game of Thrones, cable network HBO seems to have restored its reputation as the producer of high-quality television series with the release of the miniseries Chernobyl. The 5-episode series - a dramatization of the nuclear accident at the Chernobyl Nuclear Power Plant and its aftermath – received wide critical acclaim, with critics praising the show for its gripping and historically informative storytelling, cinematography that captures the eeriness and horror of nuclear radiation, and a meticulous attention to detail in the portrayal of 80s Soviet society. However, others who are more critical of the show, claim that it portrays a caricature of Soviet politics and of the way in which the Soviets handled the Chernobyl crisis. In Russian media, the miniseries has similarly been deemed a Western caricature, and, in more hostile reactions, anti-Russian propaganda.

In this blog post, it’s not my contention to discuss the historical accuracy of the series, nor am I interested in entering a debate about who should or shouldn’t tell the story of Chernobyl. What I do want to talk about is what makes the Chernobyl disaster so compelling in the first place, and why this event is still – or even more - relevant for us today. A big factor of what makes Chernobyl interesting is the air of mystery surrounding it. The disaster is both familiar, known in the popular imagination as the prime example of the dangers of nuclear power, and strangely unfamiliar, considering that there is considerable confusion and uncertainty regarding the total number of deathly victims of the Chernobyl disaster (with estimates ranging from 31 according to the Soviet Union itself to over 90.000 according to Greenpeace), the long term effects on the biosphere and human health, and the longevity of the event (i.e. how long it will take before the disaster is definitely over, before the reactor core is no longer radioactive). The Chernobyl Exclusion Zone, a radioactively contaminated area of 2600 km2 directly surrounding the nuclear power plant that has been evacuated, has its own strange sublime charm, as a place where the human being was forced to make place for the non-human. Human habitation remains present as nothing but a trace, in the form of a deteriorating apartment building, an abandoned and rusting amusement park, or a farm overgrown with trees and bushes. (In other posts on this blog, Anna Volkmar has written more about the Romantic allure of post-nuclear landscapes). 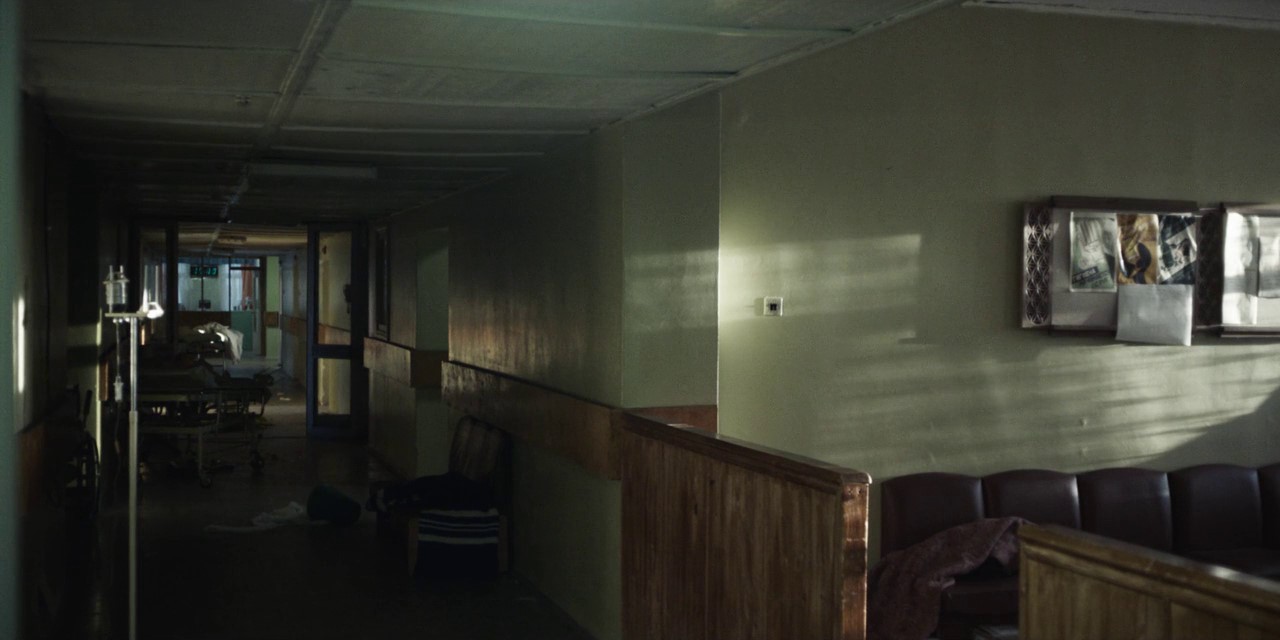 The paradox of nuclear fission is that on the one hand it has come to stand for mastery over the non-human world by the human being, who is now able to manipulate it on the level of the atom, while on the other hand it has made us aware of the finitude of human life and the precariousness of our existence. In the second half of the 20th century, the Chernobyl accident, the nuclear bombings in Japan, and the threat of a nuclear world war, generated a massive awareness and fear that the actions of human beings could cause the world to become uninhabitable for complex organisms, including humans themselves. Growing knowledge about anthropogenic climate change has only solidified the idea that our collective actions might very well lead to the extinction of our species.

The second half of the 20th century might therefore come to be seen as the start of the collapse of the myth of human mastery over Nature, and of the start of a coming to terms with a radical inhuman universe, in which the existence of the human being is nothing more than a contingency and our extinction is an inevitable, and finally insignificant event. The television series Chernobyl is at its most relevant and compelling precisely in the moments in which we are confronted with this radical inhumanity, in this case in the form of radioactive decay. In the show we see human beings interacting with this strange and deadly force, that can only be grasped indirectly, in the form of the clicking sounds of Geiger counters, the taste of metal, strange light phenomena caused by the ionization of air, and the destruction of flesh and technology. The philosopher Timothy Morton uses the term ‘hyperobject’ to delineate strange objects like radioactivity, which cannot be perceived as such, which act upon and through human beings (in this case moving through our bodies, mutating and destroying our cells), and which disturb spatial and temporal categories that center on human perceptions of the world. To learn to live and die with hyperobjects, such as radioactivity and climate change, we might need something like an inhuman perspective, in which the human being is just one of the many possible objects through which hyperobjects act, and in which the human being has no exceptional or necessary place. 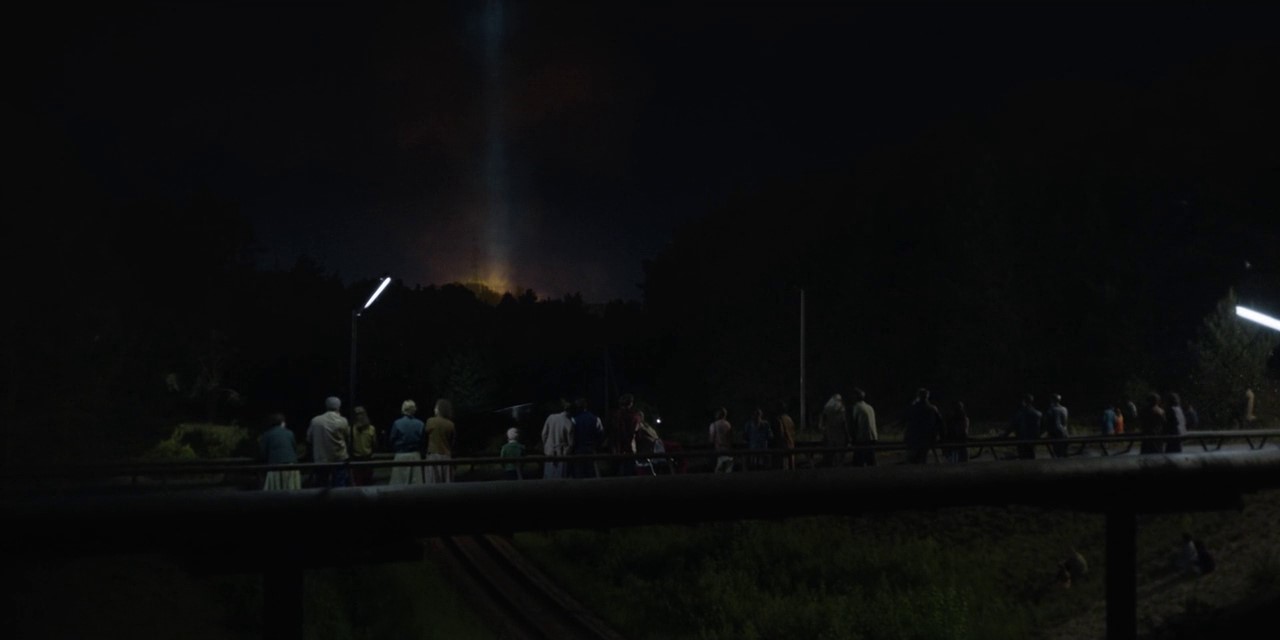 People watching a light beam caused by the radioactive ionization of air. Scene from Chernobyl, episode 1. Directed by Johan Renck. Written by Craig Mazin. © HBO, May 6 2019

With regard to this coming to terms with inhuman hyperobjects, Chernobyl is an interesting case study. In the series, there is a tension between the inhuman on the one hand and the political on the other hand. The cultural theorist Claire Colebrook has noted that the political is always motivated by the promise of futurity, by an (implicit) understanding that there is a ‘to come’. Following philosopher Jacques Derrida, Colebrook argues that concepts central to the political, such as justice and democracy, are promissory; their lasting political force resides in the promise of a democratic and just humanity to come. However, the inhuman hyperobject that emerged in Chernobyl hints towards a world in which there is no human future, no humanity to come. In other words, it provides a glimpse of the end of the political as such. There is one scene in particular that captures this clash between the inhuman and the political. At some point in the series, three soldiers are sent to abandoned city Pripyat in order to kill the dogs that were left behind during the permanent evacuation of all the human residents. Before they start doing their work in this space that is no longer habitable for human beings, they sit down in front of a forsaken building with a huge banner on its façade. The banner reads ‘Our goal is the happiness of all mankind’. 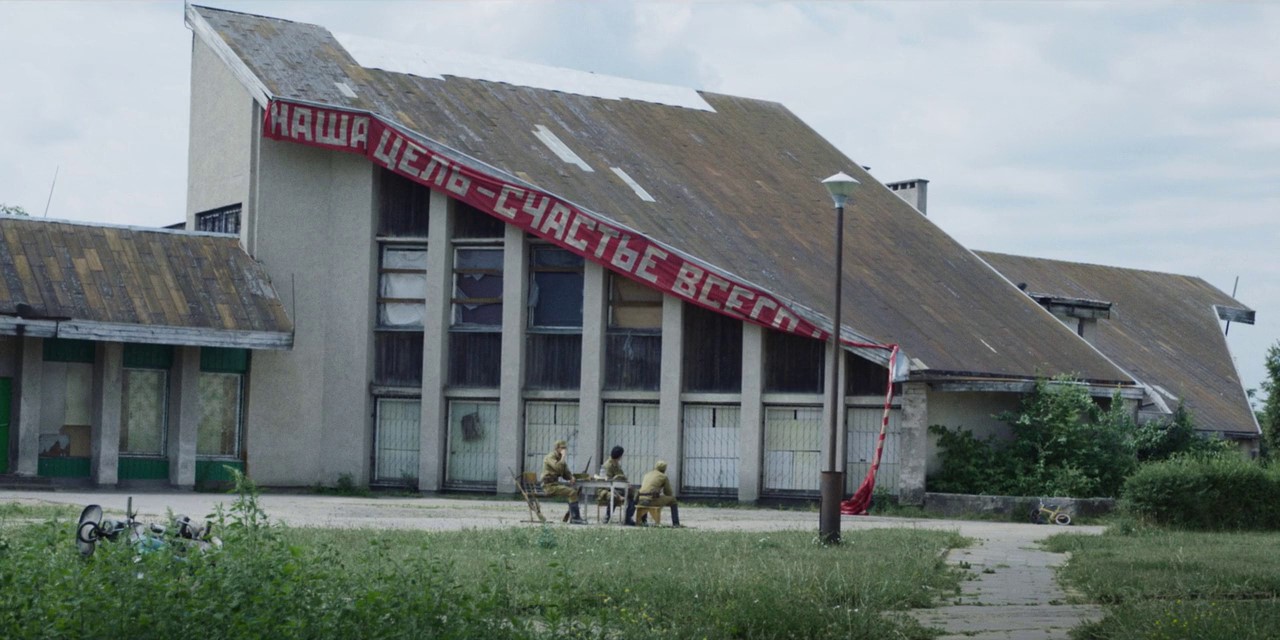 Soldier in front of a banner that reads “Our goal is the happiness of all mankind.” Scene from Chernobyl, episode 4. Directed by Johan Renck. Written by Craig Mazin. © HBO, May 27 2019.

In the end, the miniseries fails to adequately address the issue of inhuman hyperobjects. It fails because it tries to overcome the tension between the inhuman and the political by trying to subsume the former into the latter. The series makes an effort to problematize the idea that the Chernobyl disaster is a simple matter of villains and heroes, of the just and the unjust, instead suggesting that it was the system as such that produced this disaster. However, it reestablishes the kind of logic that it tries to overcome, by reframing the issue as a matter of truth versus lies, where the former comes to be associated with science, and the latter with bureaucracy, politics and ideology. In the final episode, the character Valery Legasov, chief of the commission responsible for investigating the Chernobyl disaster, states: “Every lie we tell incurs a debt to the truth. Sooner or later that debt is paid.” Here we fully return to the political: the intrusion of the inhuman is a consequence of an injustice, of a failure to be truthful, but there remains the promise of truth, of a future in which the debt is paid, in which justice has been done. The problem is that approaching the inhuman via the political leaves us incapable of taking seriously the inhumanity of the inhuman hyperobject, of taking on a perspective in which there is no human future, no promise of a justice to come, in which the human being has no particularly important or necessary place at all. Perhaps what would be more interesting, more fruitful, but also more difficult, is to rethink the political through the inhuman: What can concepts like justice, democracy and freedom mean or do in an age of global ecological disturbances and catastrophes, an age in which we have become aware of the very real possibility of extinction, and in which there might be no futurity, no promises?