The many meanings of reading (2). Imagery.

The term 'to read' is used for a myriad of activities. In this series, I will explore the different uses of the word in the context of book history. In this second instalment: text vs. images. 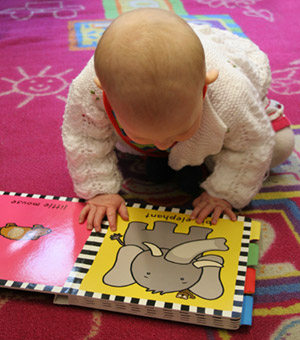 Since the advent of mass production books have become a common object in our societies. A baby playing with a book is no rare sight. But is the baby looking at the images or reading them? Most would say the baby is reading a book, even if (s)he cannot understand the text yet, because of the object (s)he is holding.

When applied to images, using the concept of reading is an understandable extension that encompasses other acts of interpreting visual information. Similar to a text, an image requires our sight to be apprehended and is composed according to conventions. We compare it with previous images, in a similar way as we compare letters and words in our memory when we are reading. Yet there is a crucial difference between the processes of interpreting text and images: once we have learned to read, new neurological circuits are formed.

As Maryanne Wolf explains in Proust and the Squid, when humans read the brain makes use of several processes to assign the correct meaning to each word in a specific context. It first connects each differentiated visual symbol (the graphemes or letters) with their sonic information (the phonemes) to interpret the text. The brain then integrates this fresh information with the knowledge it already has for future use (cumulative knowledge). As a skill, reading demands the brain connects and integrates different visual, auditory, linguistic, and conceptual information such as word meanings. 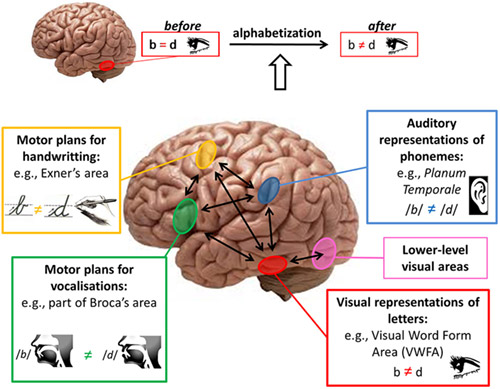 While reading these paragraphs you’re performing these tasks at a prodigious speed, most likely oblivious to all of them. Although this is amazing enough, the complexity of reading goes beyond a mere combination of steps. As humans we have several natural (that is, genetically programmed) cognitive pathways to process sensory information, such as in vision and speech. What is truly stunning is that reading is not a natural neurological activity, yet we have managed to combine vision and speech into new pathways to achieve it. This means that once we have learned how to read, our brains have been changed.

Given the processes described above it would seem pointless to make a distinction between a toddler looking at images or reading them. After all, once (s)he learns how to read their brain will have new pathways to recognise and interpret text. However, literacy levels are not equal throughout different places and periods. According to its latest survey (2014), the UNESCO Institute of Statistics puts world-wide literacy rates at 85.3% for adults. This might seem quite high, yet the remaining 14.7% refers to 758 million people who are illiterate and thus lack the combined pathways for reading, although they can interpret images. In fact it is through the illiterate and their education where one of the best-known arguments for equating images and text originates.

Reading for the unlearned

Acquiring literacy requires time, a vital resource which could be used for another activity like sowing, building, or herding. Because of this, reading and writing have been predominantly at the hands of those concerned with state, legal, and religious affairs such as resources oversight, taxes, and the administration of human and godly law.

Despite its steep learning curve and the resources it demands, reading is extremely useful. It allows an individual to come directly into contact with information without the need for a second person. Other types of information transfer include oral traditions, such as storytelling, and images. Oral traditions are suitable for direct transfer of information but require an intermediary. In contrast, images, like text, do not require a living medium, with the added benefit that they are simpler to process as they do not require the type of formal education text does.

Because of these advantages, images have been perceived as ideal educational tools for centuries. For example, the theologian Nilus of Ancyra (died 430 AD) praised Bible-scene decorations in churches as these could “serve as books for the unlearned, [and] teach them scriptural history”. Likewise, Pope Gregory I (540-604)—who was concerned with non-religious education as well—was of the opinion that “for the common folk, pictures are the equivalent of reading”.

Text and images in book history

The notion of equating images as texts for the unlearned seemed to be confirmed by the existence of certain books such as the Biblia Pauperum and catechisms used in the New World like the Testerians. Both religious works were image-based similar to a modern-day comic. Some historians believed the Biblia was a means for the poor (and thus uneducated) to read the Scripture, while these catechisms were seen as a tool analogous to alphabet books.

Upon closer examination, these assumptions failed to consider the context of aforesaid publications and their distribution. The philosopher and Wolfenbüttel librarian Gotthold Ephraim Lessing (1729-1781) observed that Bibliae Pauperum were lavishly decorated publications, in manuscript and printed form. This would indicate that, similar to modern-day coffee books, it was unlikely the poor would have owned them. Furthermore he noted that the iconography was similar to that of decorations on churches’ window-panes. For Lessing it was clear that reading was a very distinctive activity from seeing familiar images in a book or a wall. 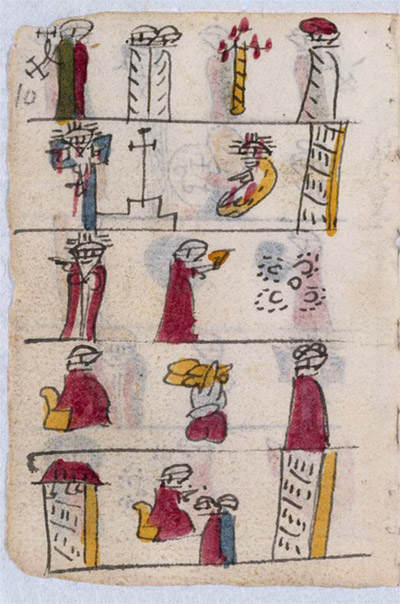 Concerning the catechisms, one of the first ones in New Spain was a small manuscript (5.5 x 7 cm.) created by Pedro de Gante. Most of these publications were drawn by hand and not printed, whcih indicates their limited availability. When one considers the size of central Mexico where the spiritual conquest started (more than 360,000 km2[1]), it is hard to imagine a couple of manuscripts as the tool that spread the Catholic faith. Although it is likely that iconography in different guises was used for spreading the doctrine, these images stand afar from reading a text. After all, the purpose of this teaching was not reading but converting.

As we have seen, reading is an acquired skill that affects our neurological pathways. Although every human can acquire it, not everybody has (had) the possibility to do so. Thus, although the process of a reader seeing and interpreting an image might not be so different from him/her interpreting text, equating both sources can be problematic.

In the present, equating text to image has ethical implications. It would mean that there is a separate type of reading for those who can’t read, while they still live in a world that is mostly affected by text. Laws, contracts, policies and (most) news are still primarily crafted in written form. There is communication in audio, video, and images but text governs our lives the most.

A similar point can be made for the past. If we equate interpreting images and reading text, there is no difference to be made between those who could read and those who couldn’t, unless they were blind. Furthermore, equating the interpretation of any cultural form (theatre, images, dances, sculpture) as reading, would reduce reading studies to communication or cultural studies. Such a generalisation would ignore the specificity of reading and what it entails.

For example, my research project focuses on the reading possibilities available in the past and how these relate to power structures. Limiting reading to textual apprehension does not mean that the images and other elements on the text such as paratext lack a language of their own. Rather, literacy on the text becomes the focus; after all someone who could read text could probably also interpret images but not so vice-versa.

Sources
The neurological explanations on reading can be found in more detail in Proust and The Squid by Maryanne Wolf.
The quotes from Nilus of Ancyra and Pope Gregory I are from A History of Reading by Alberto Manguel.
The Biblia Pauperum can be admired online at the British Library while Gante's Catecismo de la doctrina cristiana is at the Biblioteca Nacional de España.