“This is the parade road of Pripyat. Most call it ‘the ghost town’. It housed 40.000 people when the accident happened. Now it is all abandoned and turns into a forest.” As if to reflect on what he just said, Nikolai pauses and then adds with a meaningful expression on his face: “It is impressive how fast nature reclaims the city.”

I stand on a cracked patch of asphalt in the middle of the Chernobyl exclusion zone – the most visible remainder of what is still considered the worst nuclear disaster in human history. Around me the edgy architecture of abandoned prefab buildings peep through a thicket of young birches and poplar trees. The words of our tour guide Nikolai attach themselves effortlessly to the scenery I behold.

I have encountered these exact words before. Like a mantra they kept crossing my way ever since I began to study representations of the Chernobyl exclusion zone as part of my PhD research. I read them in the news, heard them in conversations with friends and colleagues, saw them in art exhibitions, and even encountered them in scientific papers. And like many times before, I again ask myself how a place so radically transformed by human activity, a site so heavily contaminated that it is considered unsafe for human habitation for at least 20.000 years to come, can possibly be traded as ‘nature’?

Obviously, the answer lies just in front of me: because it looks like nature, or, rather, it does not look like functioning culture. Moreover, the idea of ‘nature reclaiming its/her (?) territory’ that is squinting through Nikolai’s words seems to make perfect sense in light of the environmental damage inflicted on the land under Soviet rule. The consistent media coverage of the exclusion zone over the last decade has helped to substantiate this story, using a potent combination of scientific authority and photographs attesting to the zone’s ‘thriving wildlife’ (usually featuring portraits of iconic mammals such as the endangered Przewalski’s horse).

Rather than joining the general cheers about the positive turn this story has taken, this series of blogposts aims to be a critical comment on the politics of post-nuclear nature.

A Trip into the ‘Zone of Alienation’

In 2015, I undertook a guided tour into the Chernobyl exclusion zone for my PhD research. The official name, bestowed by bureaucracy, is Zone of Alienation – a term that would strike me as appropriate as no other to describe the feeling I would take away from this place.

It was a lovely Saturday in early September. The summer in Ukraine had not ended yet, with temperatures up to twenty-eight degrees Celsius during the day. In Kiev, I climbed together with twenty-four other (notably male) tourists into the coach that should drive us one day through the zone. The trip was organized by one of the official Kiev tourist agencies that have specialized on ‘Chernobyl tourism’.[1] 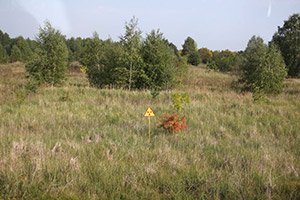 The exclusion zone designates the evacuated area of around 2.600 square kilometres surrounding the Chernobyl nuclear power plant on Ukrainian territory. When in the night of April 26 in 1986 the fourth reactor of the then-called Lenin nuclear power station exploded, large quantities of radioactive particles were released into the atmosphere, contaminating in the following weeks an area of 200.000 square kilometres in Europe alone according to the WHO. The exclusion zone covers merely a small, if well-advertised, fraction of that area. It lies in the midst of the marshy forests of Polesia (Ukrainian: Полі́сся, Polissia), one of the largest forest areas in Europe that stretches along the shared border of northern Ukraine and Belarus. 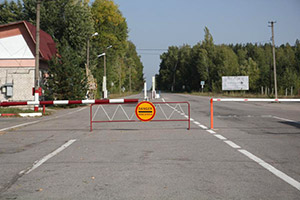 As we passed through the first checkpoint of the 30 km zone, we entered an area of natural beauty. Between birches, poplars, pines and grassland the characteristic yellow signs with the red Trefoil pop up here and there demarcating the places of high radiation, places in which contaminated machinery, plants, animals, and even whole villages had been buried in the aftermath of the disaster to prevent radioactive dust from spreading. 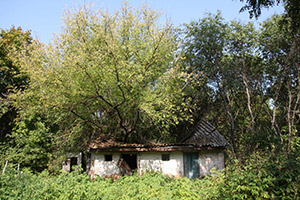 However, radioactive particles have spread unevenly due to local weather conditions. Of the 92 villages that had been evacuated in the days following the disaster, not every village has been torn down. In one of the remaining settlements, the village of Zalissya, I caught sight of a tree which grows out of an abandoned house, seemingly taking the narrative of nature reclaiming the area at face value. 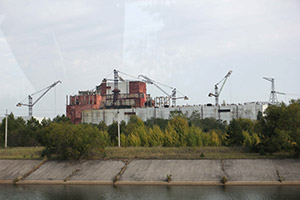 Grouping around the monument to the victims of Chernobyl with the rusty structure of the Sarcophagus in the background and the impressively shiny cylinder of the New Safe Confinement on the right, we were standing in the heart of the zone. The Geiger counters went off in a cacophony of alarm signals as the safety threshold of 3.00 microsieverts per hour was crossed. While the signal sent a chill through my bones, my thoughts kept drifting off to my tired feet and overheating body which, despite temperatures of 30 degrees Celsius, I had to keep fully covered against the beta radiation (which is not registered by the Geiger counter). It was during these fifteen minutes in front of the Sarcophagus that I felt most appalled by the rigorous dissociation of rational thinking and bodily response that characterizes the experience of harmful levels of radiation. 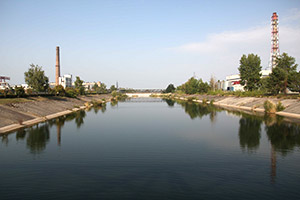 So, after having fed the famous giant catfish in the cooling pond (whose size is not due to radiation, but their age of now nearly 30 years), I was happy to leave this place. The next stop and the highlight of this one-day trip was the abandoned town of Pripyat, the atomograd that had been built in 1970 to house the workers of the then-called Lenin Nuclear Power Station and their families. It was a young city with a population of an average age of 26. In the wake of the disaster Pripyat was evacuated with no option of repopulation within human time spans. [2] 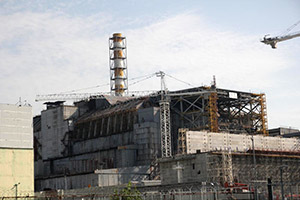 Views like those in Zalissya repeated in Pripyat with the small difference that the average background radiation lied 2 to 3 microsieverts higher than in the 30 km zone, and there were considerably more hot spots to stumble upon. Some buildings like the hospital in which the first firefighters who extinguished the fire at the reactor in the night of the accident were treated are closed to visitors since radiation levels amount to hundreds of microsieverts per hour in some places, levels to which one should not be exposed longer than two minutes. 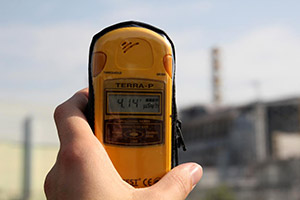 Walking through a football stadium that in less than 30 years has turned into a young forest, or over a flowering late summer meadow that used to be a parade ground, I easily forgot about the radioactive particles that pierced my cells as I was marvelling the peaceful and somehow reassuring silence of this perfectly normal looking nature around me.

Indeed, scientists confirm that deformations in animals and plants have soon decreased in the years after the disaster. Today one has to go deep into the Red Forest (formerly the Wormwood Forest surrounding the nuclear power plant, which turned ginger-brown after the accident due to extremely high levels of radiation) to find one of the iconic, deformed Scots Pines that, instead of a single trunk, develop multiple trunks growing in all directions, making the pine look like a bush rather than a tree. But the Red Forest is still too radioactive to allow tourists access. Hence, we were left with abstract numbers whose meaning we did not fully understand, and the irritating clicking of the Geiger counters in our hands. 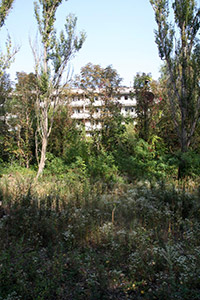 The question I took home from this trip was: how to deal with this alienation, this well known, yet poorly understood condition in which our senses, expectations and even calculations fail us? One option that has been well exercised in the past decade is to celebrate the ‘return of nature’ with differing views on what ‘nature’ might denote. The American journalist and author of the book Wormwood Forest: A Natural History of Chernobyl Mary Mycio, for instance, considers the term ‘involuntary park’, coined by science fiction writer Bruce Sterling, more suitable than the many versions of Eden evoked in the press, since “(i)nvoluntary parks do not, as Sterling puts it, represent untouched nature, but ‘vengeful nature’ – natural processes reasserting themselves in areas of political and technological collapse” (128). 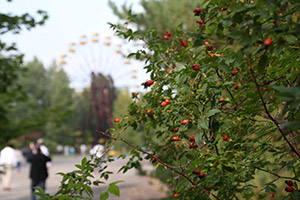 However, the image of ‘vengeful nature’ does not help much to describe the highly complex, yet poorly understood radioecology of the zone since it tries to reassert a clear-cut distinction between nature and culture that has been thoroughly blurred in the zone. Moreover, be it pristine or vengeful, the ‘returning nature’ narrative comes with a rather problematic history that is readily appropriated by business minded politicians. More on that in the next blogpost.

[1] For those interested in academic studies on the phenomenon of Chernobyl tourism, see Yankovska and Hannam 2013, Stone 2013, Goatcher and Brunsden 2011.
[2] For details on the history and nuclear iconography of Pripyat before and after the Chernobyl disaster, see Wendland 2015.

Wendland, Anna Veronika. 2015. “Inventing the Atomograd: Nuclear Urbanism as a Way of Life in Eastern Europe Before and After Chernobyl.” In The Impact of Disaster: Social and Cultural Approaches to Fukushima and Chernobyl, edited by Thomas M. Bohn, Thomas Feldhoff, Lisette Gebhardt, and Arndt Graf, 261–87. Berlin: EB Verlag.