Welcome to the Chernobyl Nature Reserve

Plans to turn part of the Chernobyl exclusion zone into a nature reserve are in the pipeline. But what does it actually try to preserve? A queer ecosystem or merely a fantasy of resilient nature?

In Spring 2015 Ukraine's minister of ecology and natural resources Igor Shevchenko signed a document that proposes to turn the Chernobyl Exclusion Zone (CEZ) into a biosphere reserve. A biosphere reserve consists of three zones: a strictly protected core zone, a buffer zone and a transitional zone that is open to (sustainable) businesses . Environmentalists received the much anticipated document with enthusiasm, because it allows part of the zone to become a nature reserve. For Shevchenko, however, the key benefits of such a decree are economical, as it would allow business to settle inside the CEZ, which is currently forbidden. This includes plans to build a centralized repository for spent nuclear fuel in the heart of the CEZ in two years from now. It appears, much to the dismay of environmentalists, that for Shevchenko the rezoning of the CEZ simply presents an opportunity to buffer the costs connected with the management of the contaminated areas and “forget about this problem for 100 years” . 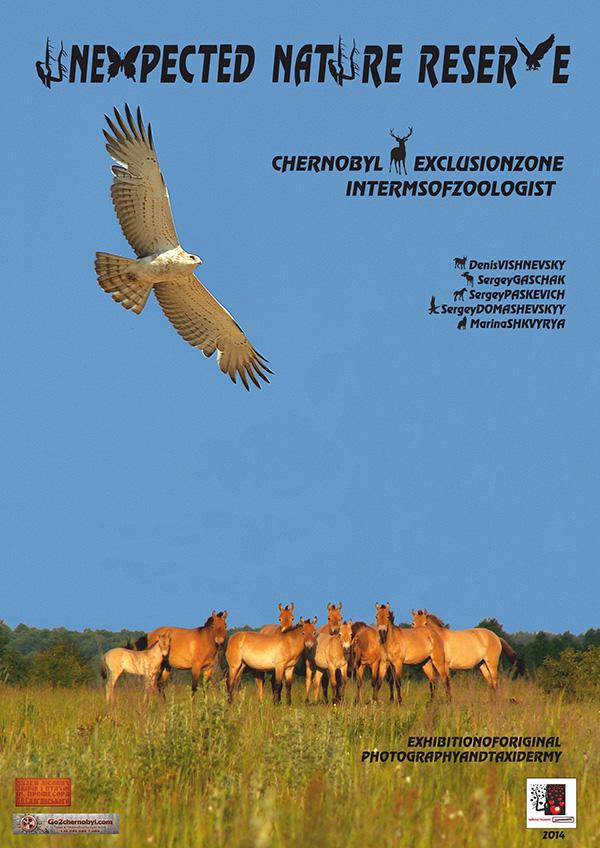 Although business and nature preservation interests seem to be mutually exclusive, they are both products of the same story: that nature has recovered to a stable equilibrium in the CEZ. Given the flood of images presenting the zone as a flourishing wildlife haven, this may intuitively appear to be so, but in this blog post I will show you just how flawed and meticulously constructed this narrative really is. Let me take you on a trip to the Ukrainian National Chornobyl Museum in Kiev to show you how that was done. 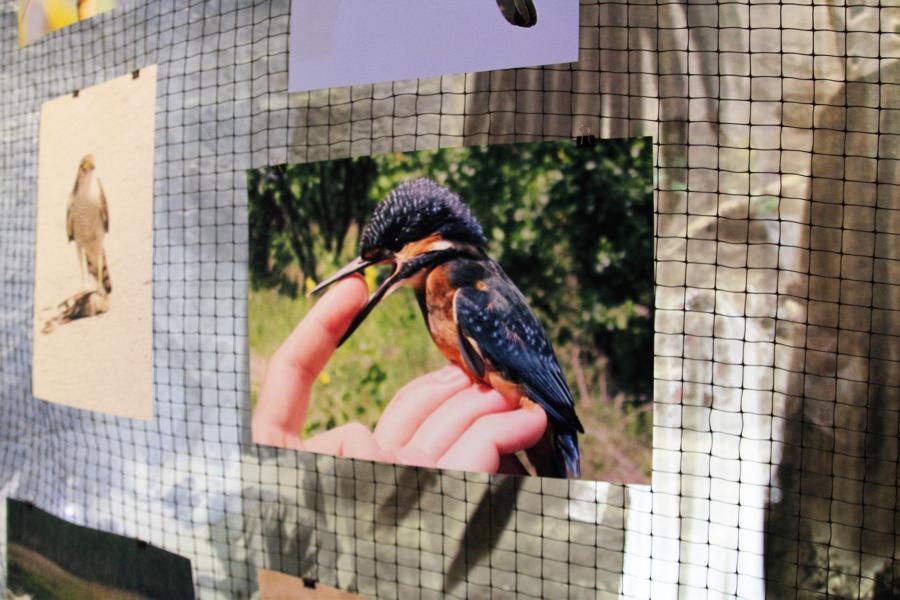 I visited the Chornobyl Museum as part of my trip to the CEZ last September. It hosts an impressive collection of archival material linked to the Chernobyl disaster, including photographs, news articles, letters, even doors, windows, and a couple of stuffed animals (that make you wonder about potential radiation inside the museum...). When I entered the building I was greeted by wildlife photography from the special exhibition “Unexpected Nature Reserve,” showing rare or endangered species that were found to be living in the CEZ. The collection was spiced up with photos of happy zoologists cuddling fluffy baby wolves. 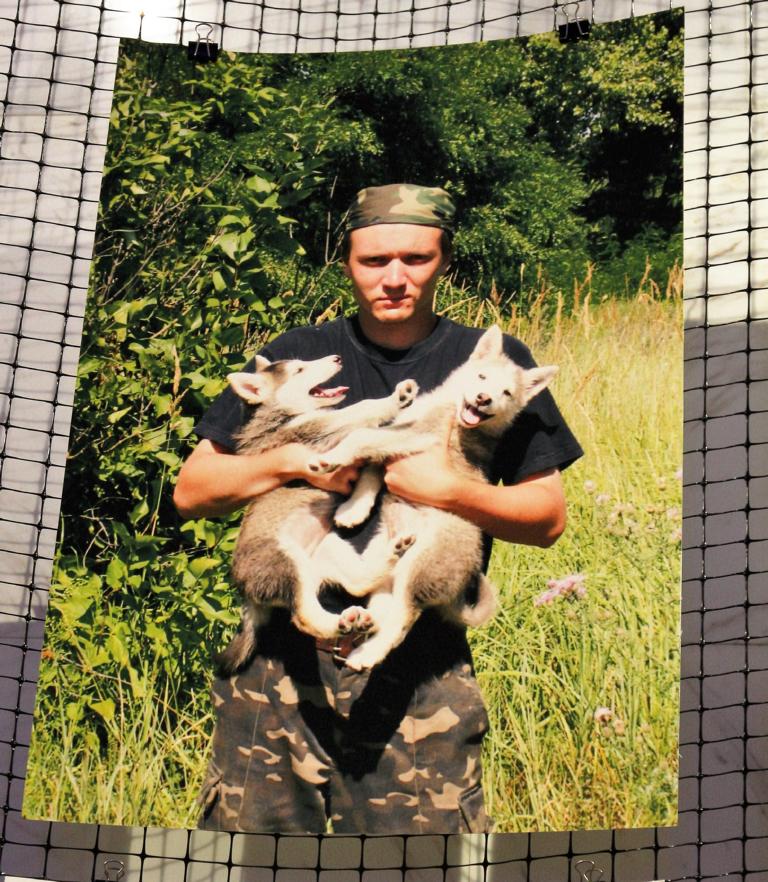 In the midst of the photographs, I found a poster proclaiming the “New Ecological Balance” of the CEZ. It showed a scale balancing positive and negative factors that impact the zone's ecological health. Positive factors (in green) include the “Curtailment of economic activity”, “The resettlement of 135,000 people” (how is that a positive factor?!), a “Considerable diversity of landscapes” and the “Strict protection of the territory”, while the negative factors (in red) account for the “Anthropogenous transformation of the landscapes” and “Radioactive contamination”. Unsurprisingly, the scale is weighed down by the positive factors, which effectively produces the belief that nature has settled into a new equilibrium (a variant of the story of nature’s resilience that I introduced in my previous blog post). 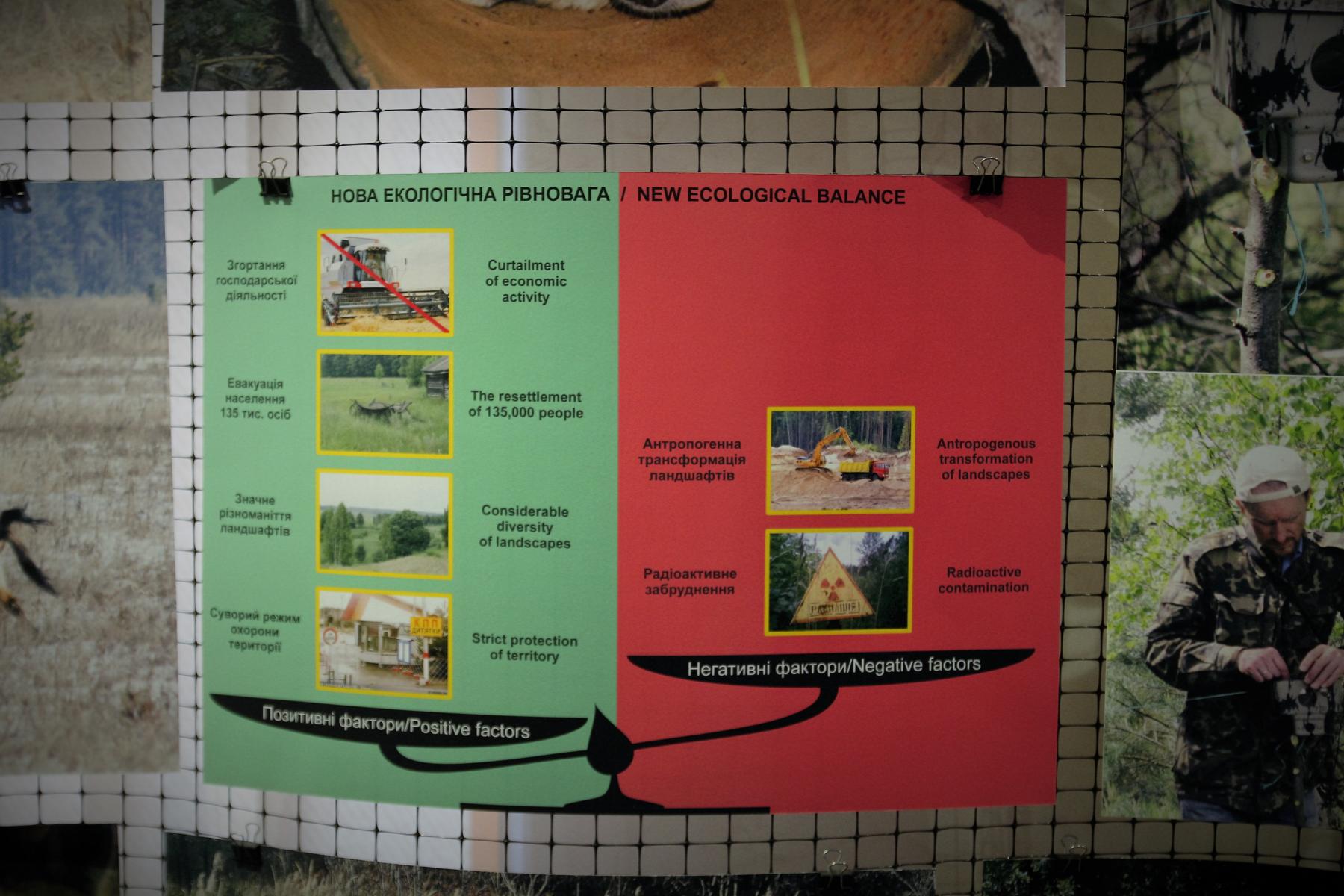 Does it mean, then, that we can sit back and observe the spectacle of nature taking its course, relieved from all responsibility? Unfortunately, it is not nature that will sort things out for us, but (ironically perhaps) profit-oriented corporations, as the governmental plan for the zone makes unmistakably clear.

I want to address three questions that the narrative that is told in the Chornobyl museum raises for me:

Is there a scientific base supporting the “new ecological balance” narrative?

The scientific work being done on the zone's ecology is qualitatively and quantitatively insufficient to support the claim that radiation has no negative impact on the zone's wildlife. Moreover, the museum seems to deliberately exclude any negative evidence from their displays: there is no sign of mutations or abnormalities. For instance, there is no mention of the barn swallows that have gained some publicity a few years ago through a study by Danish ornithologist Anders Møller and his team, who found a significant increase in abnormalities among populations breeding inside the zone such as deformed beaks, toes, and feathers and unusual coloring. 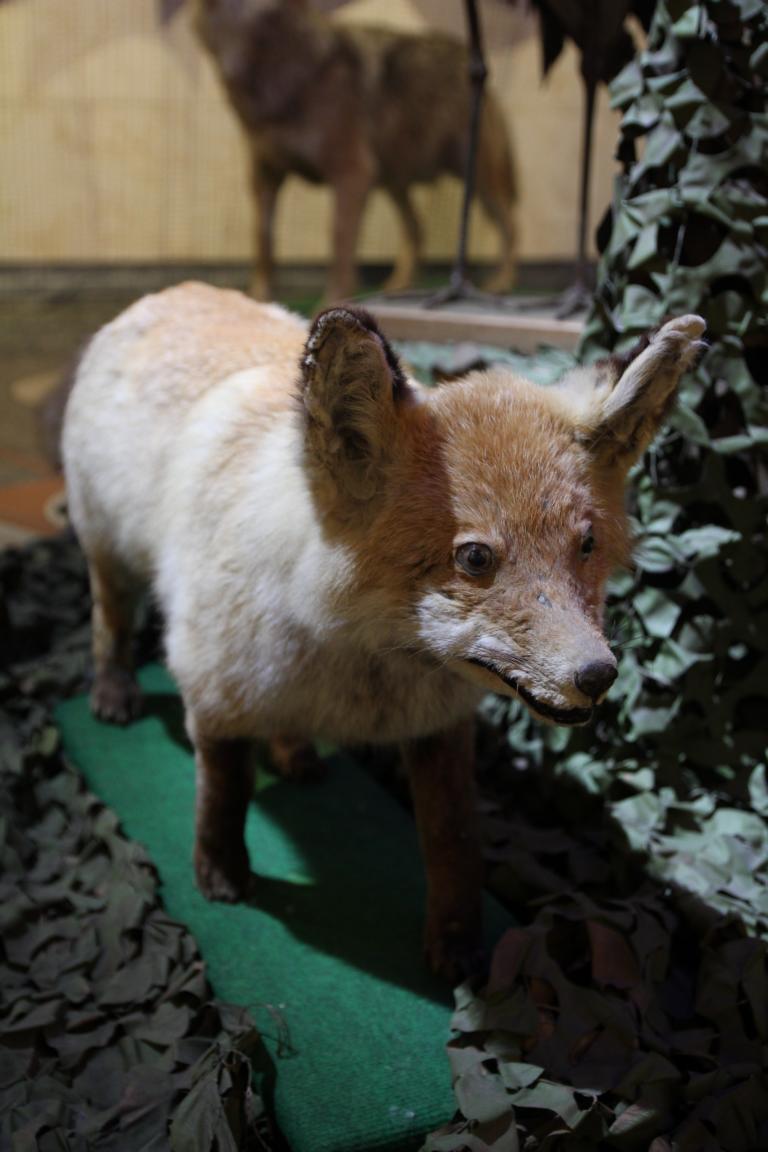 The “new ecological balance” promoted in the display is based on an outdated scientific model of the 1960s. According to this model, also known as the balance-of-nature theory, ecological systems tend towards a stable equilibrium (homeostasis): changes in a particular parameter (the size of a particular population) will be corrected by negative feedback that will bring the parameter back into balance with the rest of the system.

This model has been replaced by theories of disturbance and fluctuation for more than 25 years. The dominant view within the ecological sciences today is that change and chaos rather than constancy and balance form the rule. Thus, the theory of a balanced nature “makes nice poetry”, as plant ecologist Steward Pickett succinctly put it on a conference in 1990, “but it's not such great science”. 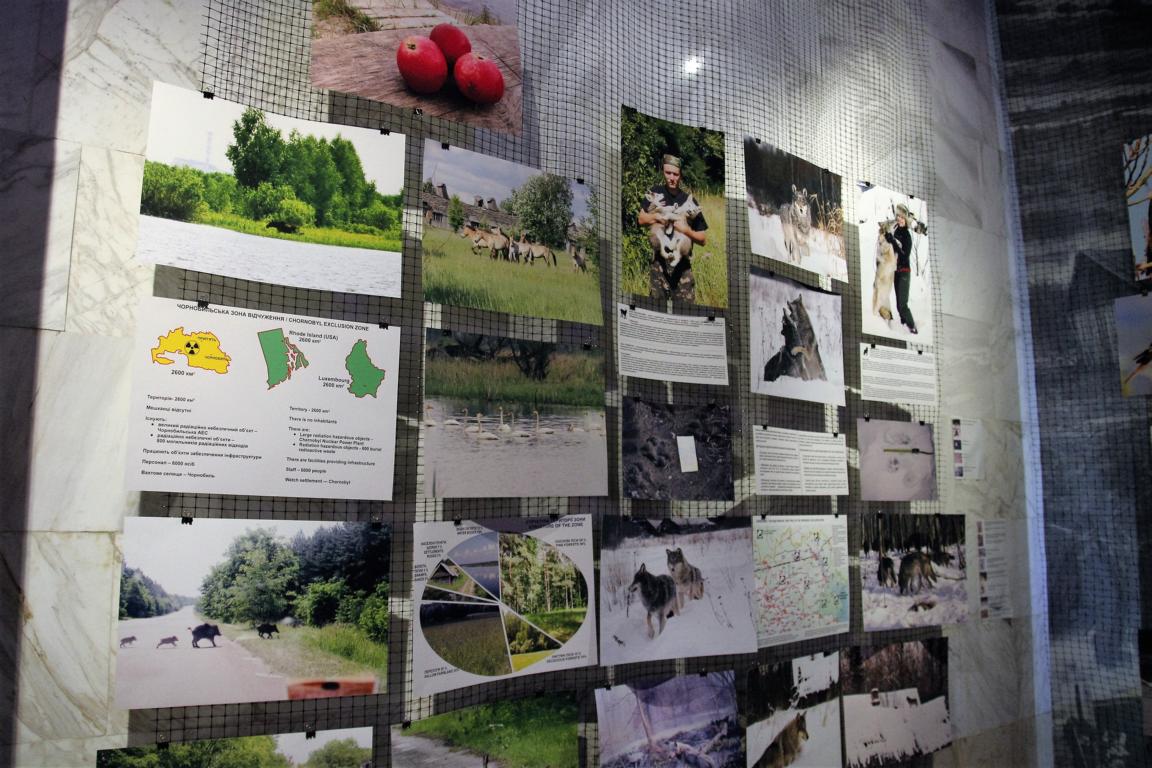 Ironically, the “new ecological balance” achieved through reduced human activity in the zone, elsewhere serves as the main argument to settle business in the zone. The idea of balance creates the illusion of controllability, for example through wire mesh fencing. And we all know how much respect radionuclides and wild animals have for those… 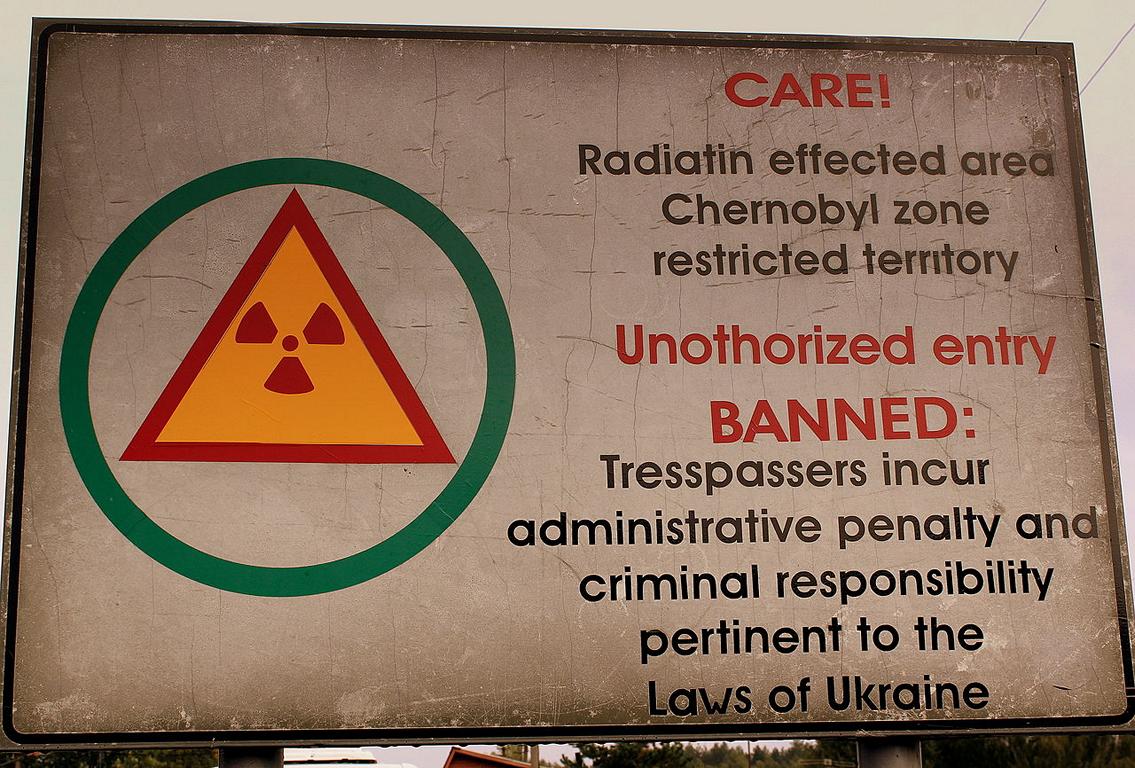 The warning sign at the first checkpoint guarding the road into the Chernobyl exclusion zone. Image: Wikimedia

Where are the people in this story?

Lastly, the balance-of-nature model promotes a concept of Nature (capital 'N') that excludes the human (or, at least, some humans). Hence, the third point I want to address is that the image of Chernobyl as 'new wilderness' helps to cover up past and future social violence. It is well known that there are several hundred settlers in the zone (for reports on the life of zone residents see for instance here, here, or here (my favorite)). Not all of them are illegal. None of them enjoy the support of the social system. Yet, the debate around the biosphere reserve is curiously oblivious to these people. And, perhaps, this is not at all surprising, since they neither contribute to business nor to the fantasy of the new wilderness, which by the government's definition can only accept economically profitable humans like tourists, workers or scientists working for the government.

In sum, the new post-nuclear wilderness does exactly what the Romantic concept of wilderness (especially in the American tradition) did all along: it covers up environmental and social violence with a beautified and highly selective image of what we imagine nature to be.

The decree that would turn Chernobyl into a biosphere reserve is expected to be approved by the government later this year. I am curious what it will preserve: the queer ecosystem that the CEZ is (one that includes humans and toxins into the equation) or an exclusionary fantasy of post-nuclear Nature.