From radioactive felines to three-legged bunnies?

In an earlier post, I have written about colour-changing cats as an intriguing (albeit not very realistic) thought-experiment to explore one of the most mind-boggling challenges of our generation: to communicate the danger of radioactive waste 10,000 years, or even 1 Million years into the future. For this post, I have teamed up with independent illustrator Laurence Herfs to share with you the first outcomes of an interdisciplinary project that I initiated to bring the theoretical insights I have gained over the past four years of PhD research into a dialogue with artistic practice.

With generous support of LUCAS and NWO, I commissioned three artists in the field to develop a conceptual marker for a radioactive waste disposal site: Agnes Villette, Elise Alloin and Grit Ruhland. To kick off the project, I invited them along with PhD candidate on geological media Laura Pannekoek (Concordia University, Montreal) to a workshop in The Hague in the beginning of July. It carried the somewhat heavy-handed title “Joining academic expertise and artistic practice to develop a nuclear waste repository marking system” and yielded some surprising insights. To keep a safe atmosphere, I decided not to take photographs for documentation purposes, and instead asked Laurence to observe the conversations and make drawings on the day. Hence, all the illustrations in this post sprang from her skilled hands. 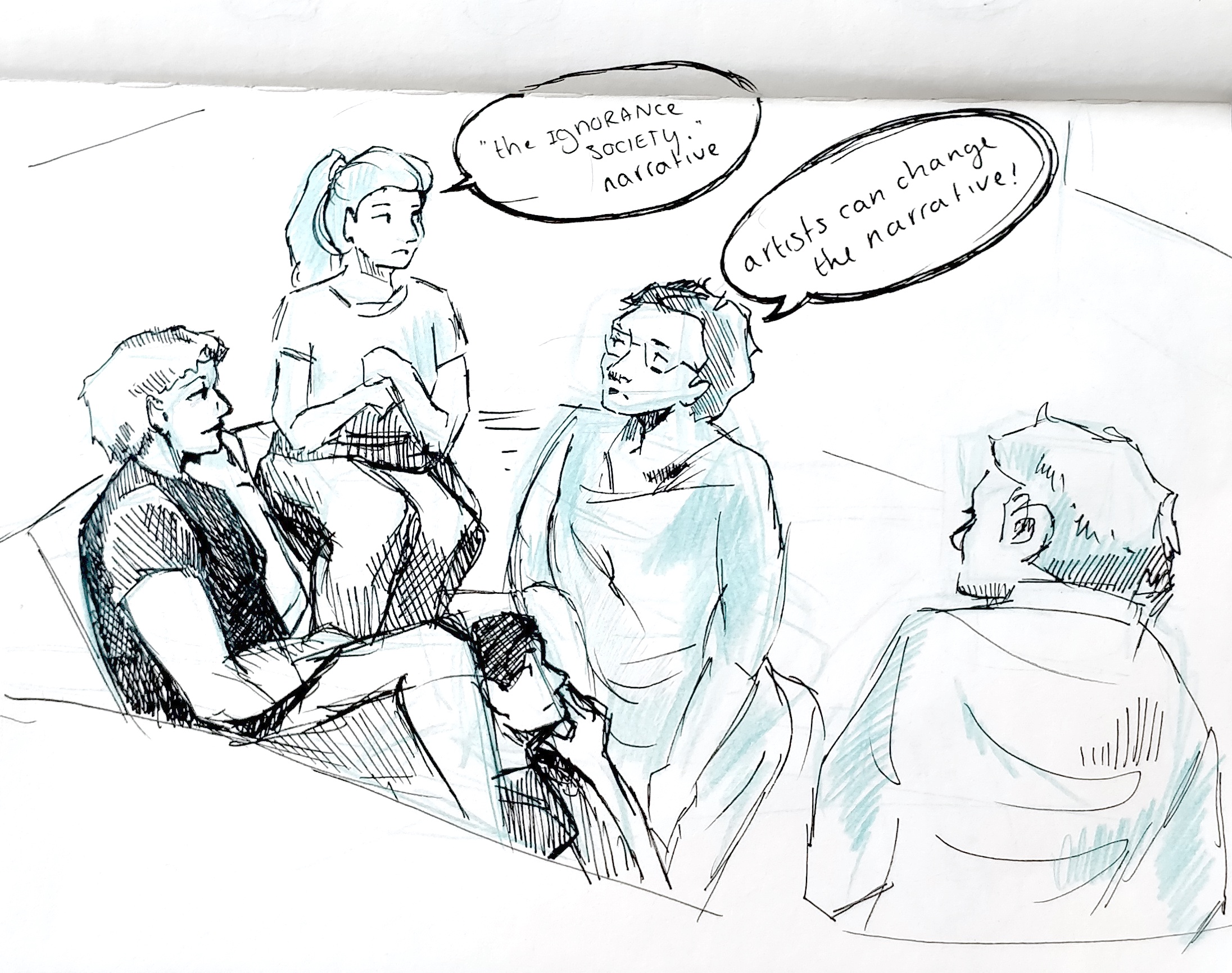 The participants of the workshop from left to right: Laura Pannekoek, Anna Volkmar, Elise Alloin, Agnes Villette, and Grit Ruhland (below). Illustration by Laurence Herfs.

So, how to speak to whoever in the far future any communication effort might be able to reach? To explore questions like the one above, I argue in my dissertation that we need to go beyond the scope of science and engineering in which the problem of nuclear waste disposal is currently being addressed. Following Braden Allenby and Daniel Sarewitz (The Techno-Human Condition, 2011) in their claim that technologies like nuclear reactors do not produce problems to be solved, but complex conditions that need to be managed, I stress the importance to include artists and Humanities scholars, alongside the general public, into decision-making processes around the storage and disposal of nuclear waste. As such, part of my research explores how artists engage with the question of how to deal responsibly with radioactive waste and at the same time open a critical space to reflect on our relationship with nuclear power by developing markers for deep geological repositories. 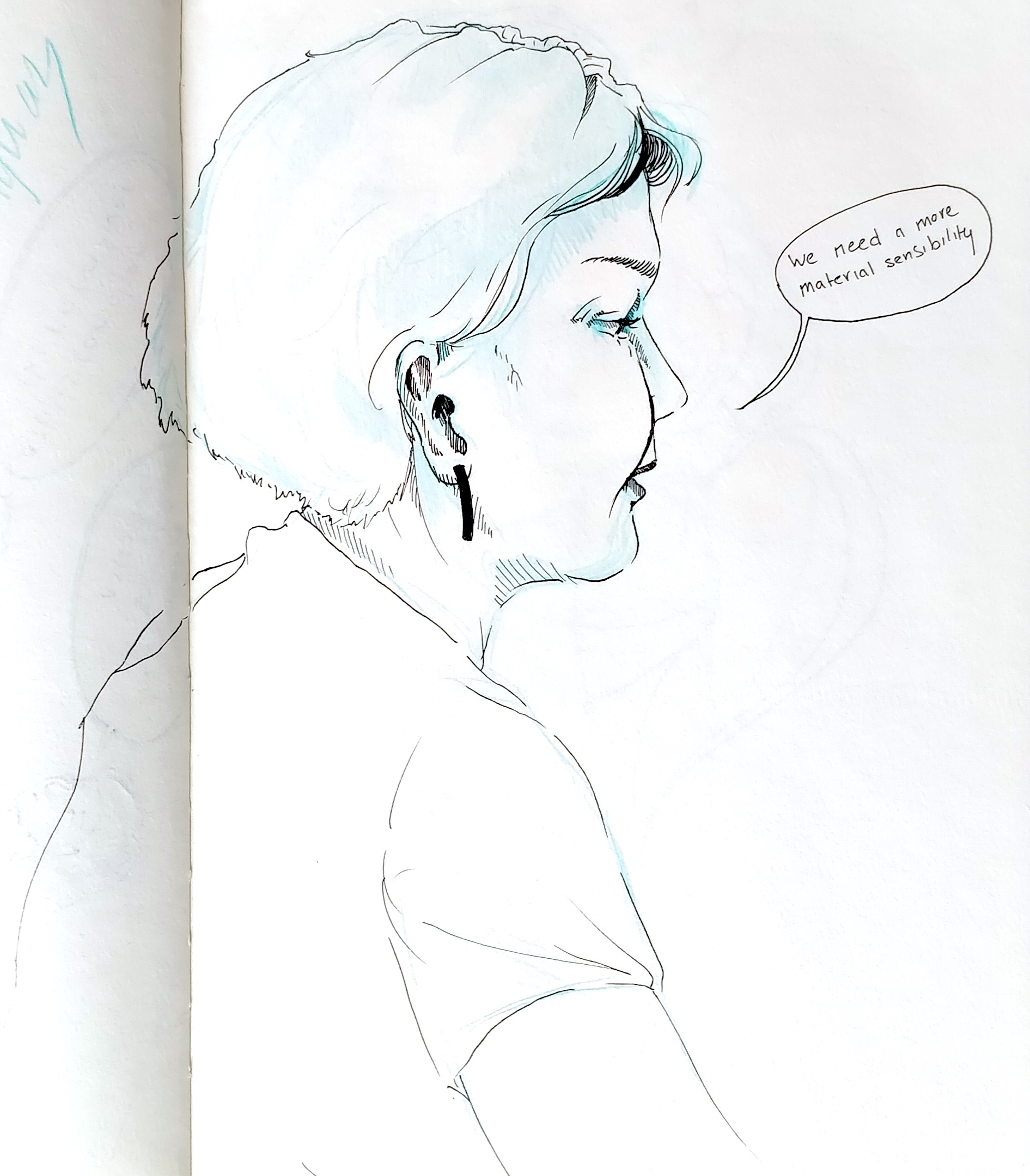 Opening the discussion of the workshop, Laura Pannekoek suggested that if we want to communicate into the far future, we shouldn’t rely on symbols. We should develop a “material sensibility” that conceives of geology and everything we dump in it as a form of media. How, she asked, could art help us to develop this material sensibility? 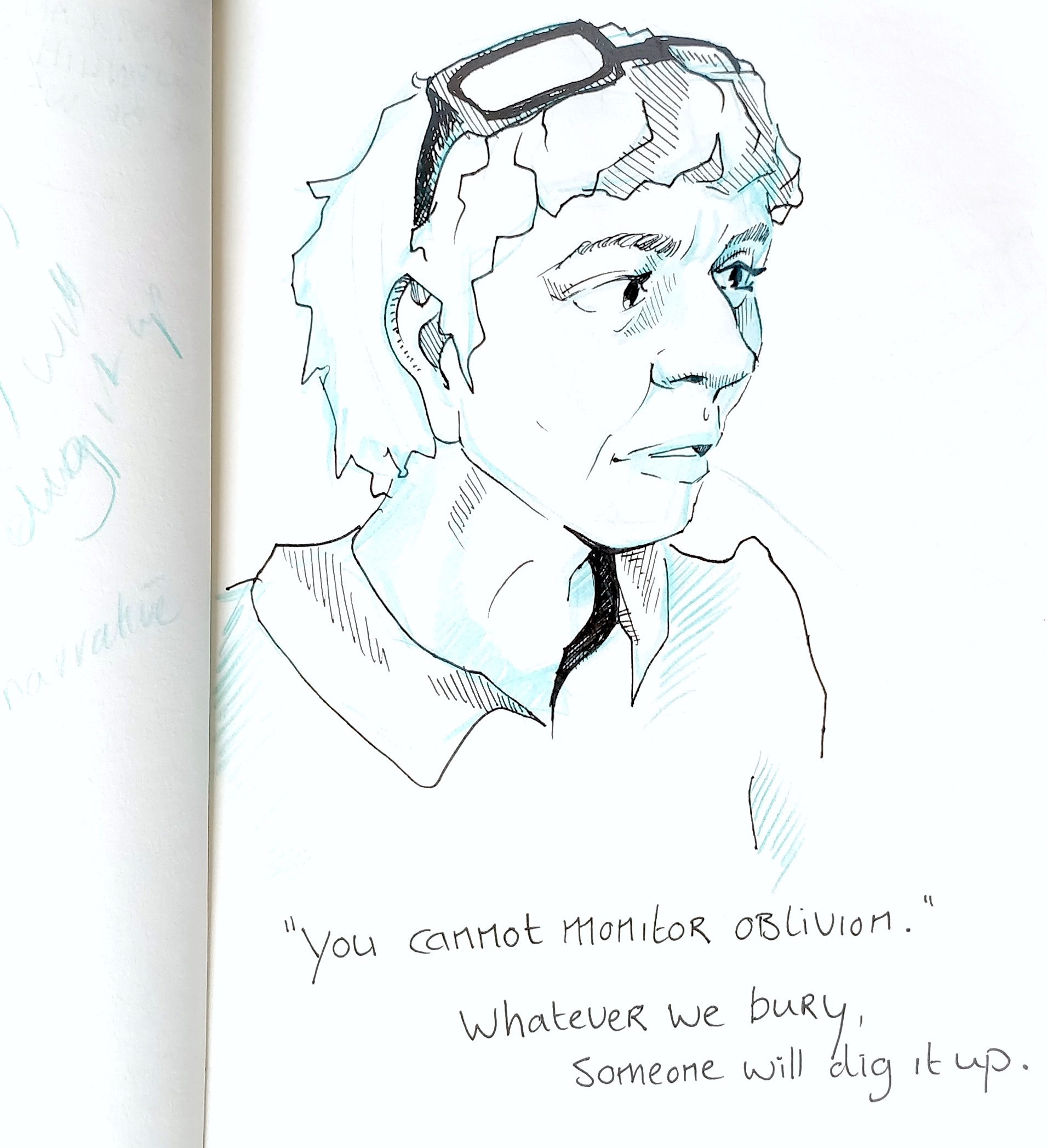 All three artists invited to the workshop have been, in one or the other way, wrestling with this question for some time. In her role as a journalist, photographer and environmental activist, Agnes has extensively explored the surroundings of the nuclear fuel reprocessing plant at La Hague on the Cotentin Peninsula in northern France close to where she grew up. For another project, she engaged with (natural) caves and bunkers of the Cold War, some of which were reused after 1990, for example as a data storage centre. What connects these subterranean structures and nuclear places is that they all are ‘haunted’ by the past in a very material way, creating a lineage of rumours, secrecy, and hiding. Studying these places and their unwanted visibility she doubted that not marking a repository will actually make people forget about it. To use her words: “you cannot monitor oblivion.” Instead, she suggested we should use the knowledge of these places to inspire the construction of nuclear memory. What about, for instance, projecting a message of terror into a cave as a 3D audio-vision, self-powered by hydro-tidal power generator? 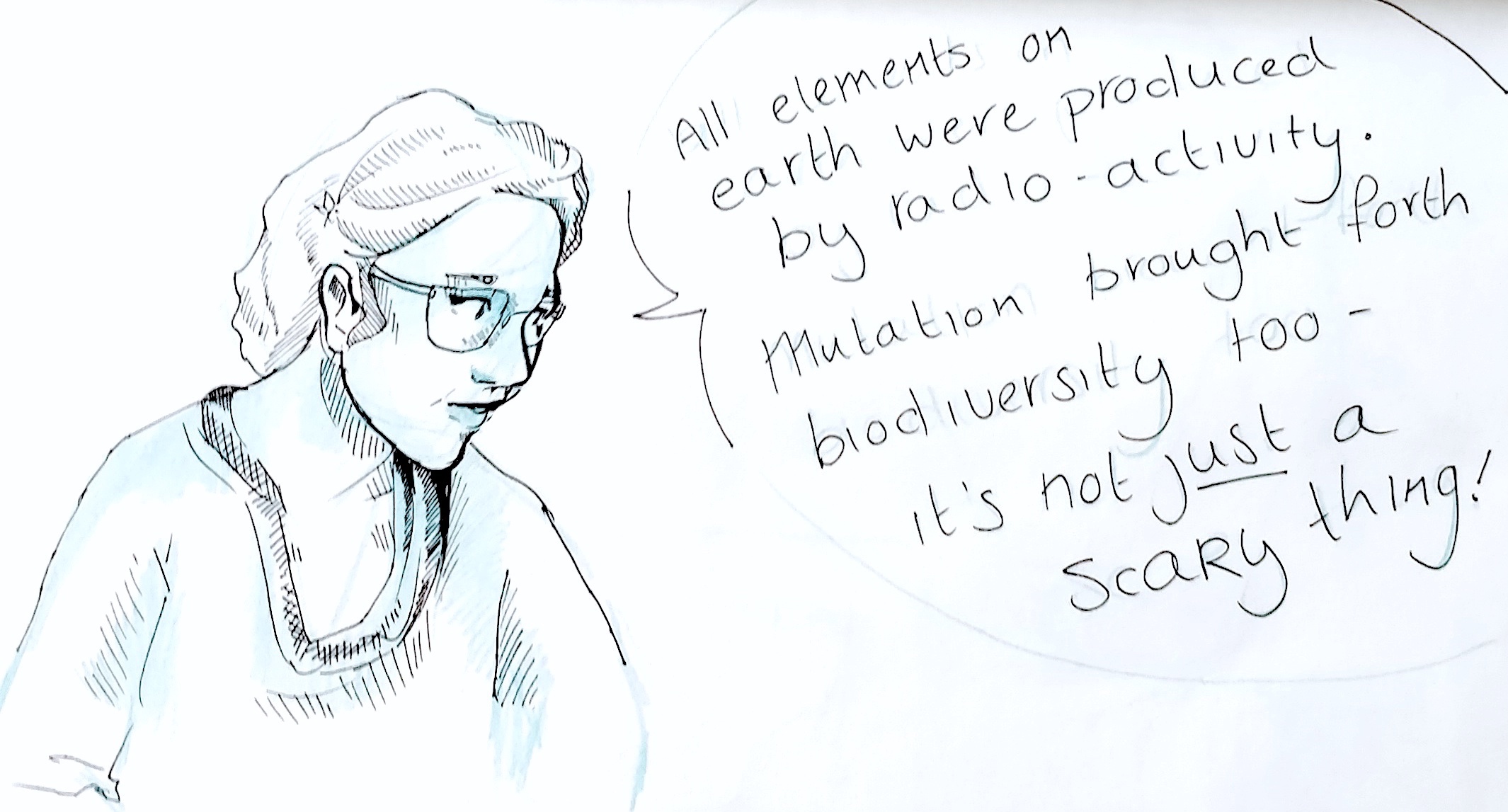 Elise took the opposite approach: not terror, but beauty will be remembered. For her winning piece in the 2015 competition to develop a nuclear marking system for future disposal facilities by the French National Radioactive Waste Management Agency (ANDRA), she proposed an above ground installation that would mirror the otherwise invisible architecture of the repository in an appealing way. This is an intriguing proposition to make, as it implies that the form of a repository must not only follow technological rules, but also aesthetic ones. After all, for a visible mirror structure to be appealing, it should comply to certain conventions of beauty. Hence, Elise suggested during the workshop that we should make something beautiful if we want people to care for it over millennia. A marker should be a place of encounter rather than a place of exclusion, as historical approaches suggest. 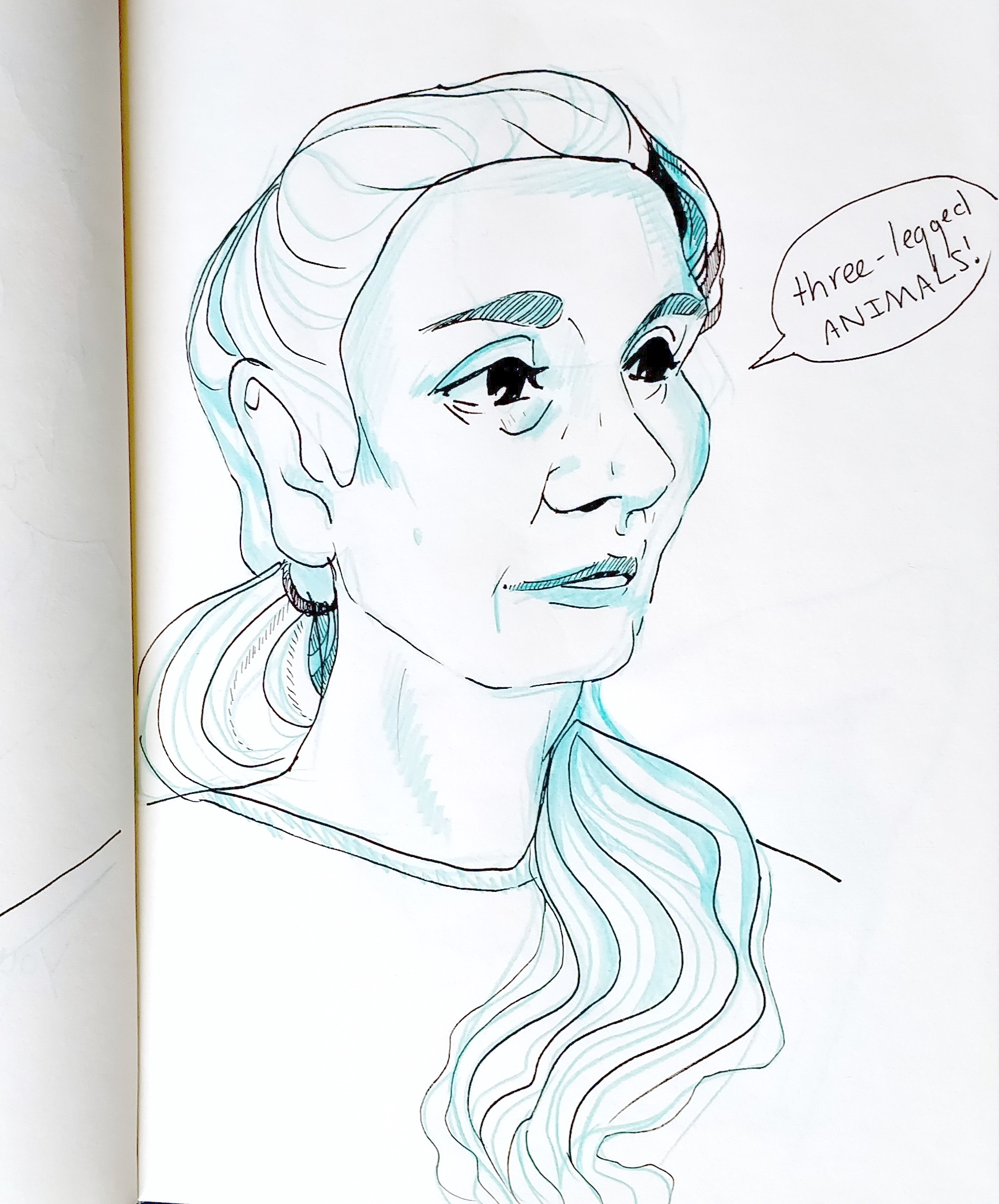 Grit devotes her on-going artistic PhD research to the other end of the nuclear cycle: uranium mining. In the province of Thuringia where she grew up and which belonged to the former German Democratic Republic, uranium was extracted to fuel the nuclear power plants but also the nuclear weapons program of the Soviet Union. As part of her research, she traces regional fables to their nuclear origins, like the frequent mention of three-legged animals close to the area where later mining pits would appear. It is figures like hares and badgers with missing limbs that have taught people over generations about the dangers of radioactivity long before they knew what radioactivity was, that could possibly inspire modern marking practices.

So, how do we communicate about nuclear waste effectively? It is a question many have tried to answer more or (usually) less successfully. We have tried to make the day as pleasant and inspiring as possible with plenty of food and, following Nietzsche and Rousseau’s habit to walk as they chewed on philosophical problems, an extensive walk through the woods. However, at some point in the afternoon we, too, reached a point of argumentative exhaustion that was crowned by Grit sighing “why are we doing things, anyway?” It is difficult to talk about a future that, strictly speaking, is not only unknown but unknowable. And those in charge, the nuclear industries, are not particularly helpful when it comes to leave the well-trodden paths of doing things. But this is exactly why we need artists and scholars to engage with these questions. Just because we don’t have a satisfying answer yet (and may never will) does not acquit us of the responsibility we carry for our waste. Perhaps, the very act of looking for new paths already brings us closer to achieve that goal than we think.

The final concepts will be presented during a public exhibition at the University’s facilities in the fall. Besides sketches of their marker systems, 3D models will be created to add tangibility to their conceptual work. Keep an eye on the LUCAS newsletter for more details!