Kuroda Raiji: “We collect Asian art in which we detect contemporaneity”

The Fukuoka Asian Art Museum dedicates its activity to modern and contemporary art from Asia and it is the only museum of the world of its kind. In November 2017, the museum witnessed an exceptional conflation of Southeast Asian art in its program.

In 1999, the Fukuoka Asian Art Museum (FAAM) opened to public. It departs from the Fukuoka Art Museum (FAM) that opened in 1979, an institution that for two decades lead institutional relations between Japanese museums and Asian nations. Upon its inception, 677 works were transferred from the FAM to the FAAM, originating its current collection of modern and contemporary art.

Taking from its predecessor, the FAAM did not attempt to distinguish itself from or break with tradition: it kept many administrative procedures and staff and continued to expand its collection. Two very important programs remain(ed): the Asian Art Show, in 1999 rebranded as Fukuoka Asian Art Triennial, and the Residence Program, which brings annually artists, curators and researchers to Fukuoka. The importance of the triennial and residence programs cannot be overstated, as through them, the museum maintains and expands its regional networks, and simultaneously incorporates new works for its collection, now containing approximately 3000 specimens. 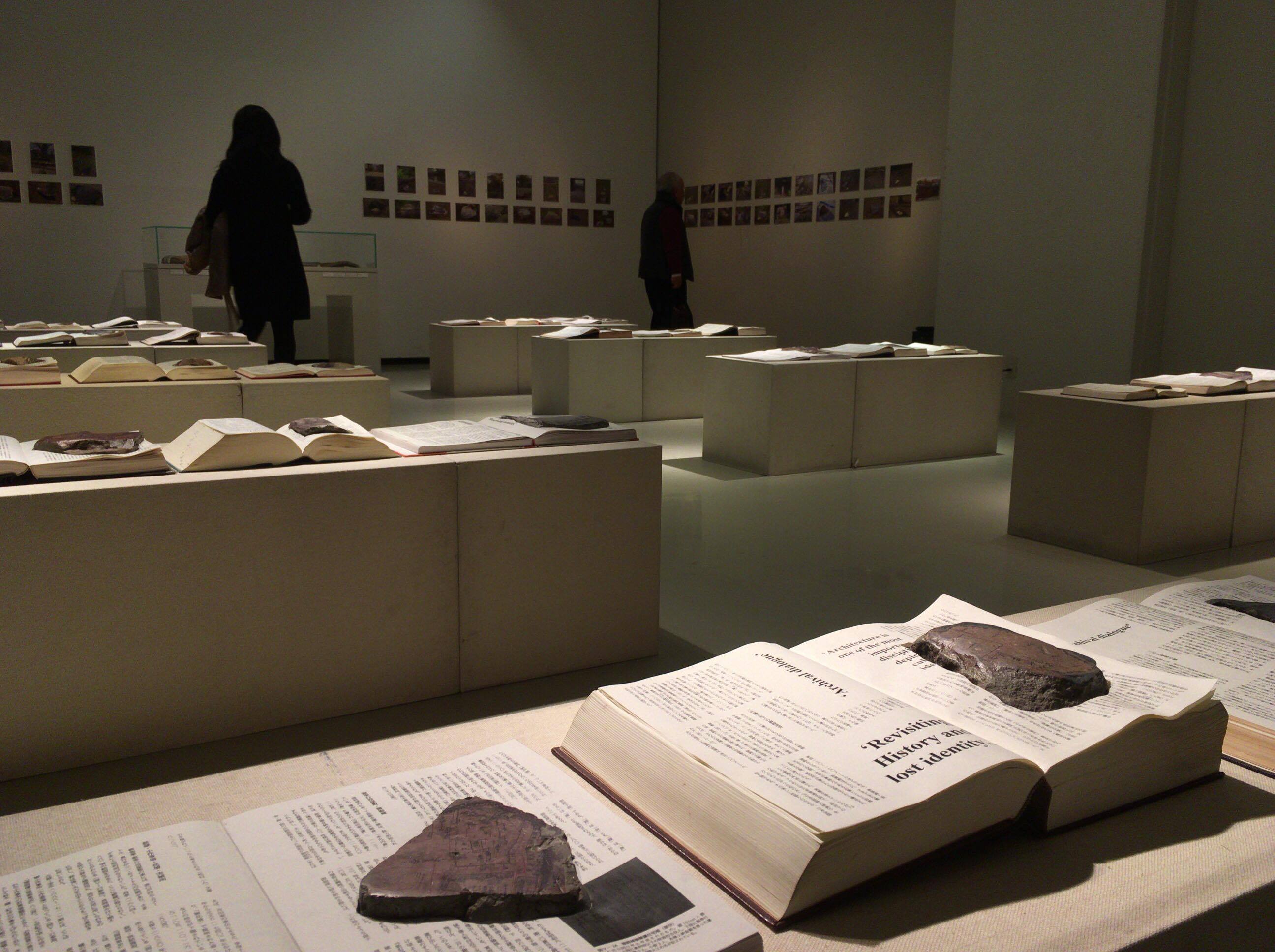 Exhibition view of the work Revisiting History and Identity by Krupa Makhija (b. 1983, Patan, India), Artist-in-Residence in Fukuoka in the fall of 2017.

What defines the FAAM’s activity?

Since its inception in 1999, the FAAM has functioned as a museum of modern and contemporary Asian art, fostering the creation of original works while acting as a platform for cooperation between artists and researchers to learn and create together.[1] Its mission makes it distinct from other Asian Art Museums worldwide such as San Francisco, Seattle or Paris. The collection is based on modern and contemporary art, and not rooted on arts from antiquity.

The collection is divided in two streams: first, the path of modern art, which includes every country’s own manifestation of a “western-style paradigm” and simultaneously traditional manifestations which emerged in reaction to Westernization.[2] One of the museum’s most notable examples of such works is the work Fawn, by Indian modern artist Jamini Roy (1887-1972). 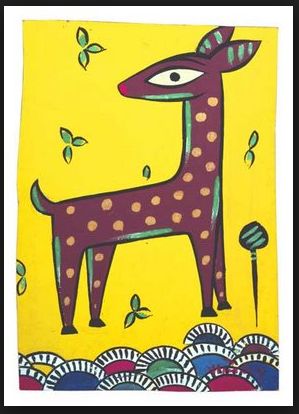 The second stream of the collection refers to artistic manifestations more closely related to everyday life, such as folk art practices, prints, calendars and souvenir paintings made to sell to the Western tourist, which are more suited “for display in an ethnographic museum or anthropological museum.”[3]

A region as vast as Asia, the former Chief Curator, Kuroda Raiji admits: “It is not possible to collect all genre arts, so we collect Asian art in which we detect contemporaneity.”[4]

In November 2017, three temporary exhibitions dedicated to Southeast Asian contemporary art marked the museum’s agenda: Welcome to Art in Myanmar!, Peaceful Chaos: Thai Contemporary Art through the Lens of Fukuoka, and the travelling Sunshower, which opened in Tokyo in May 2017 and was reorganized in Fukuoka to hold a smaller representation which included more of the museum’s holdings. 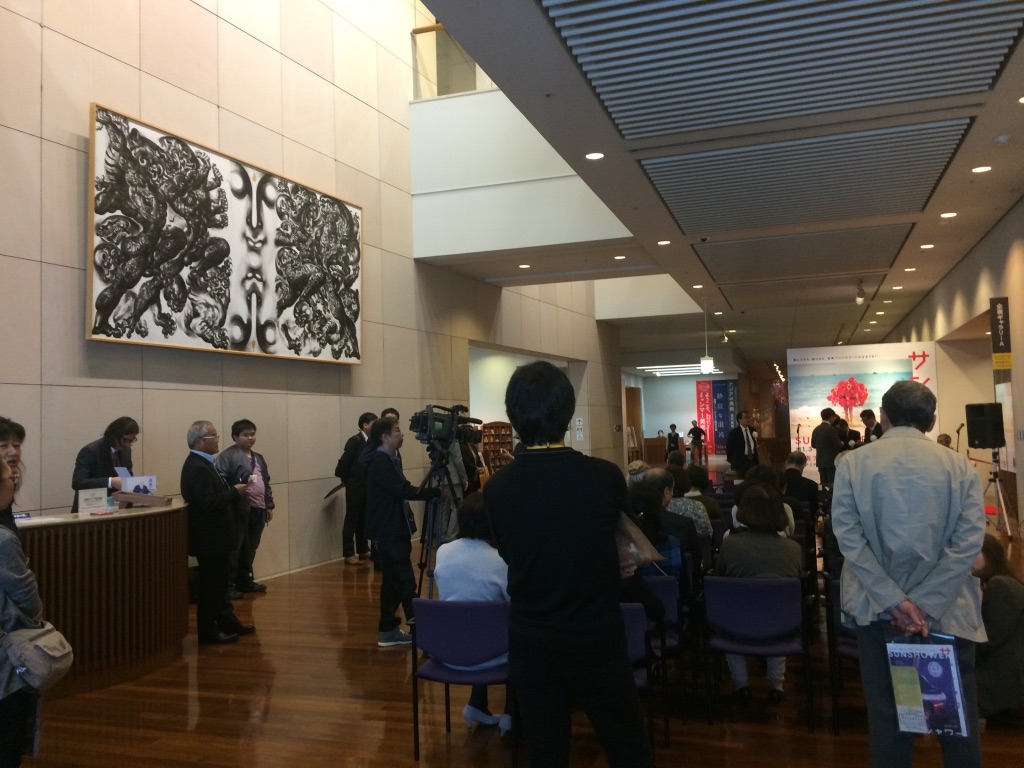 Opening reception of Sunshowers, on November 2, 2017.

Sunshower constitutes the most ambitious exhibition on Southeast Asian art since 36 Ideas of 2002, and the seminal exhibition New Art from Southeast Asia 1992, which travelled several cities in Japan, including Fukuoka.[5] Upon its arrival to Fukuoka, Sunshower was reassessed and deployed by the FAAM’s team as an opportunity to validate some of the most important acquisitions the museum has done throughout its circa twenty years of existence. Among these, works by Filipino Norberto Roldan, Indonesian Heri Dono, Singaporean Tang Da Wu, Lee Wen and Amanda Heng, and Thai Montien Boonma were added to the initial selection, adding a local agency to the initial curatorial message.

The opening of Sunshower in Fukuoka was marked by the presence of three Singaporeans: performance artist Lee Wen, who reactivated Strange Fruit (2003), researcher Kho Nguang How, who displayed part of his archive on the Singapore Artist Village (1988-1990), an alternative performance group that has since the banishing of performance art in Singapore lived and acted in nomadic conditions and artist Suzann Victor, who installed her work Veil-See Like a Heretic (2017) in the temple of Joten-ji, a historic temple located in Fukuoka. 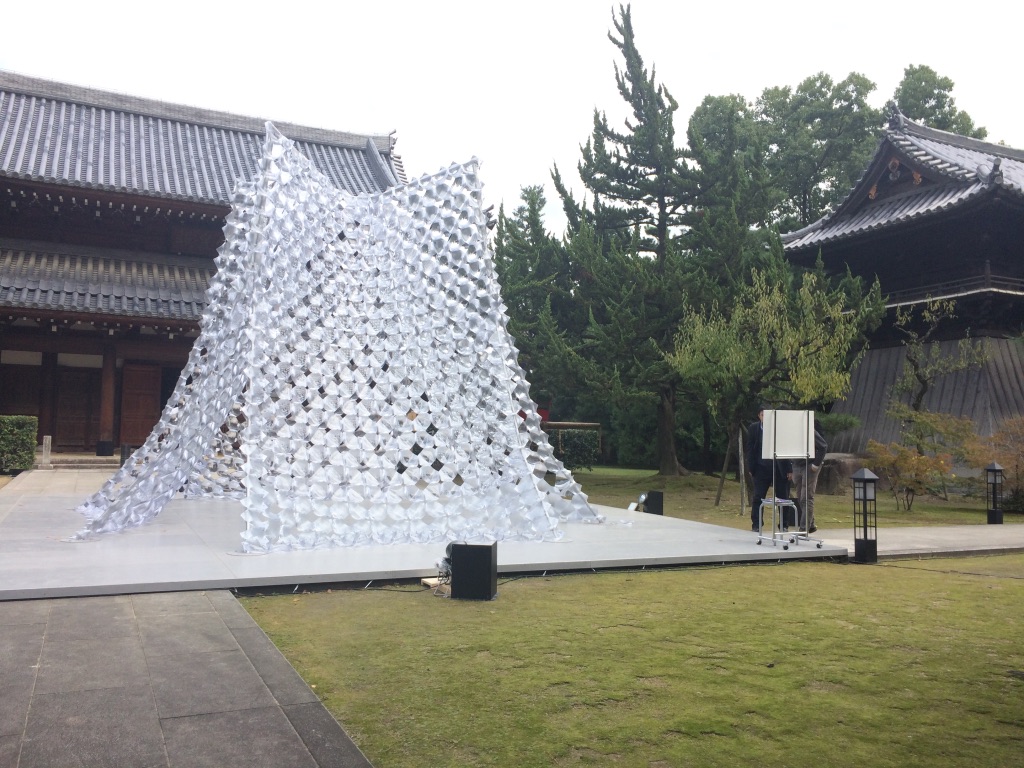 Singaporean artist Suzann Victor’s installation A Thousand Skies, in Joten-ji, a historic temple located in the Hakata region of Fukuoka.

The exhibition Welcome to Art in Myanmar! was made exclusively from the museum’s collection. The discursive analysis of this comprehensive show of Burmese art was guided by the linear narrative modern to contemporary, which places the debut of modernism in the colonial period of British rule, and followed by the postcolonial era. The section ‘Art after Independence’ included modern paintings by Burmese artists practiced in western styles in search of a national identity, as it happened in other Southeast Asian nations. During the 1980s, like in most of the region, Myanmar witnessed social preoccupations enter artistic discourse. Communities such as the Gangaw Village Art Group (founded in 1979) credited as the first contemporary art group in the country emerged and started to produce art with social commentary. The show’s final room, dedicated to post-1990s practices, demonstrates that Myanmar has equally entered new media trends, including photography and digital installations.

Peaceful Chaos was equally developed through the museum’s holdings. The curators grouped contemporary Thai art practices in three sections: the rise of new traditionalism since the 1980s, when Buddhist insights penetrated contemporary expressions, the advent of industrialization and its disturbing impact on daily life, and the age of mass consumption. 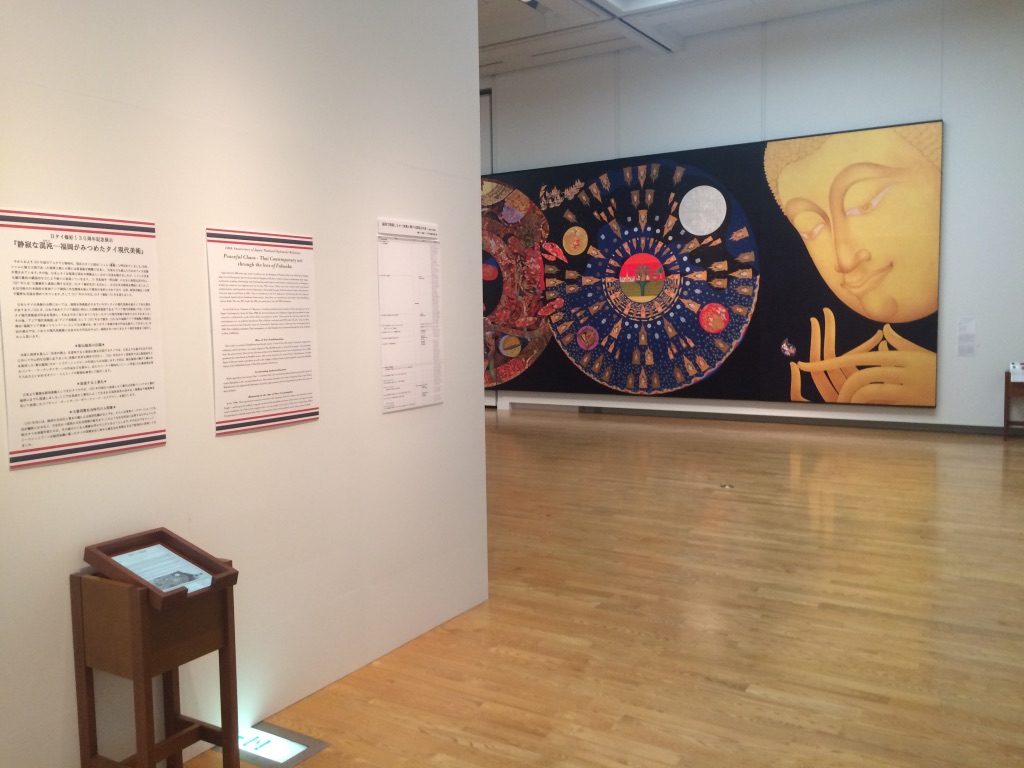 The three shows presented post-1980s practices, the decade considered as the debut of contemporary art in the region. The exhibitions equally found common ground in a discursive analysis in which social commentary is paramount, making evident that contemporary expressions, at least in Southeast Asian contexts, are attentive to present considerations.

The FAAM’s activity is extremely relevant for the understanding of modern and contemporary Asian art. Its rootedness in research and its collection holdings, and in an extensive program of residences and exhibitions, makes the FAAM one of the most important contributors for the making of discourse on Asian art worldwide.