On 4 and 5 April, young scholars from a diverse array of research institutions across Europe, America, and Asia gathered together in Leiden for the LUCAS Graduate Conference 2019 under the theme of "Animals: Theory, Practice, Representation".

This year, the conference was dedicated to the study of animals in a broad sense. Given the rise of environmental crises, ecological issues, and ethical debates stirred by the expanse of human activities, there has emerged an urgent need to reappraise the relation between humans and other(ed) living creatures who live on the same planet. The very distinction between human and non-human, so to speak, owes to the dominance of anthropocentrism entrenched in human societies. Bearing in mind this imperative, the organizers wanted to bring young scholars into conversation with such an occasion. The sources explored and exhibited by the speakers range from medieval manuscripts to science fictions, reflecting the variety of methodologies and subjects in the emergent field of animal studies. 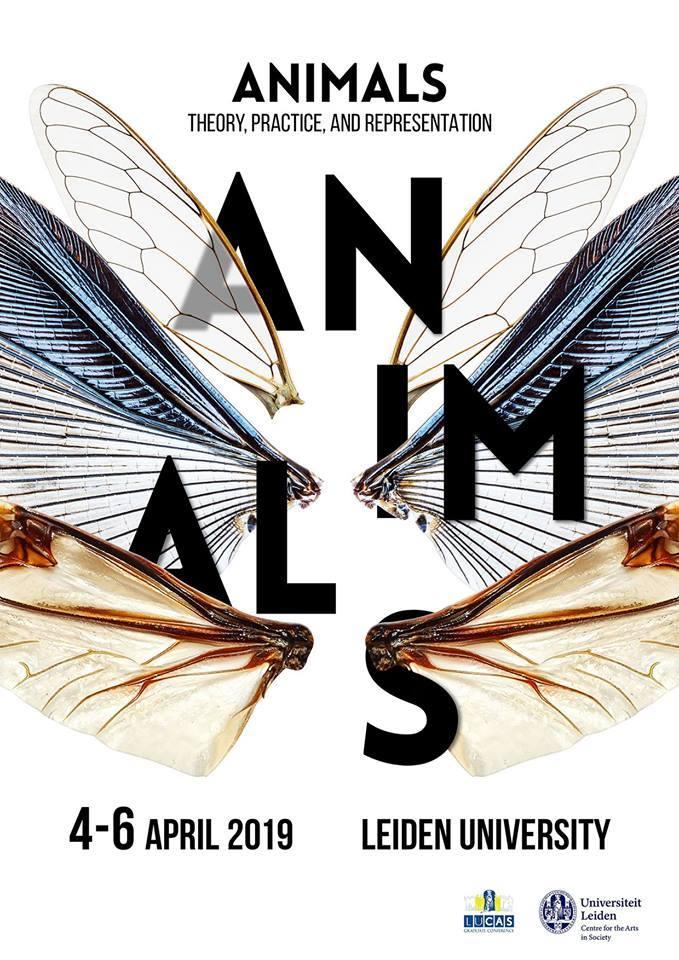 The poster of the conference, © LUCAS Graduate Conference

The conference opened with a keynote speech by Dr. Tobias Linné (Lund University) who unearthed the dark side of dairy industry, centering on the violence and racism that have been long overlooked or ignored altogether. In his talk, Dr. Linné appealed for stronger ethical commitments to and protective measures against animal abuse in the dairy industry across the globe. 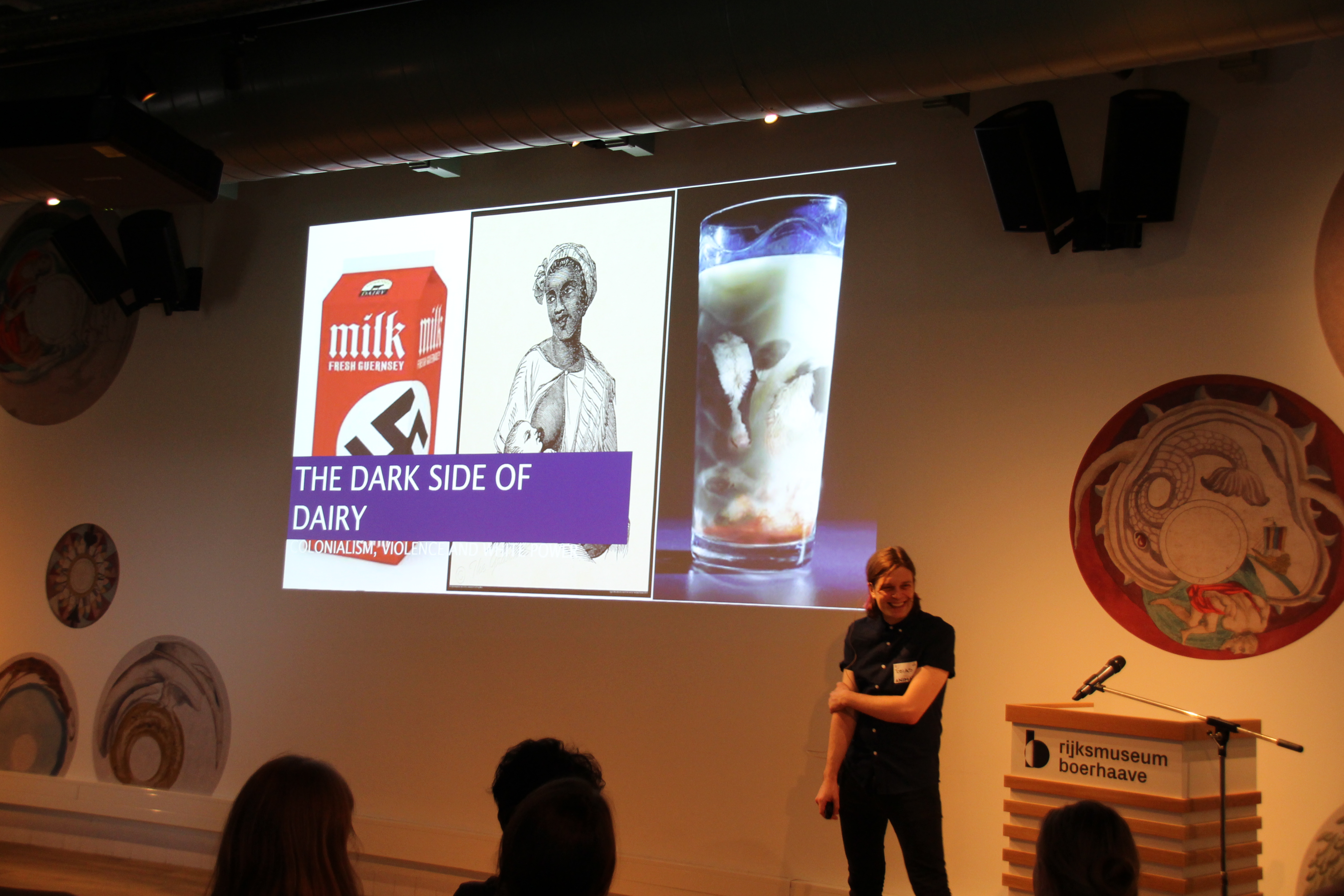 The dark side of dairy by Tobias Linné, © LUCAS Graduate Conference

Human-animal relations, nonetheless, might seem not that disquieting. For example, Efi Mosseri (Tel Aviv University) teased out how human-canine relationships have drastically shifted during the 13th century with a glimpse into illuminations in medieval manuscripts. She demonstrated that dogs carried a symbolic function when inserted as pets in private spaces. Two other talks called attention to the existential condition of animals in the Netherlands from the past to the present: Robbert Striekwold, a PhD candidate of LUCAS, traced the construction of ecological and social discourses around overfishing in the Netherlands since the nineteenth century. Sharing a similar concern, Tess Josien Post from Utrecht University analyzed the different roles of animals and humans in the Oostvaardersplassen, where a weird sort of “wild” nature with grazing herbivores had been created since the 1980s, leading to something far away from any form of “natural balance”. However, this is only a tiny glimpse into the complete program. Hence a compelling question: under what circumstances can we justify a human-animal relationship as a way of mutual companionship or merely another form of human cruelty? 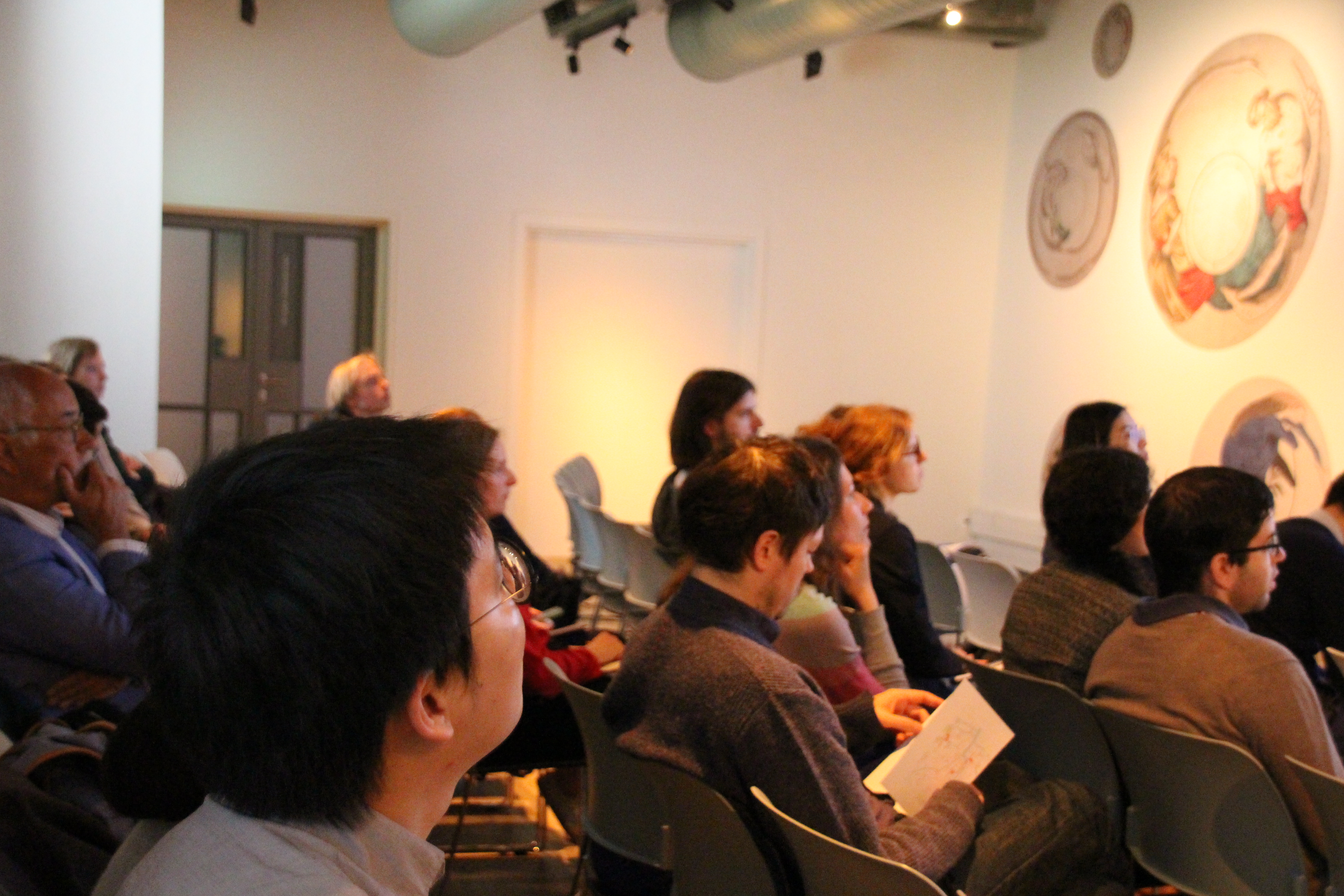 On the second day of the conference, Prof. Dr. Robert Felfe (Mainz University) in his keynote emphasized on the shared spaces we cohabit in with animals, such as urban space, and how cohabitation has been manifested from the fifteenth to the twentieth century, from premodern paintings to street photography. The embodiments of animals, he argued, can actively and continuously shape our conceptions of animals instead of what they are in reality.

The question of agency was a common concern among several talks. To begin with, to what extent can animals claim a space for themselves? What space are we willing to give them? What other ways are there for humans to tell stories about animals? Closing in on farm animals and literary texts, Liza Bauer (Justus-Liebig-University of Giessen) pondered how alternative cultural mechanisms might confer agency upon animals in narratives. Giovanni Bellotti (Studio Ossiana) reflected on the architecture of cages, zoos and national parks, which he regarded as ambiguous spaces that appear to us as wild nature, but in fact stem from artificial construction. Furthermore, he also hinted at possibilities for change: some of the models he designed might potentially turn spaces as such into what he dubbed “nomadic gardens,” where humans can wander around and explore without causing immediate or collateral damage to nature. 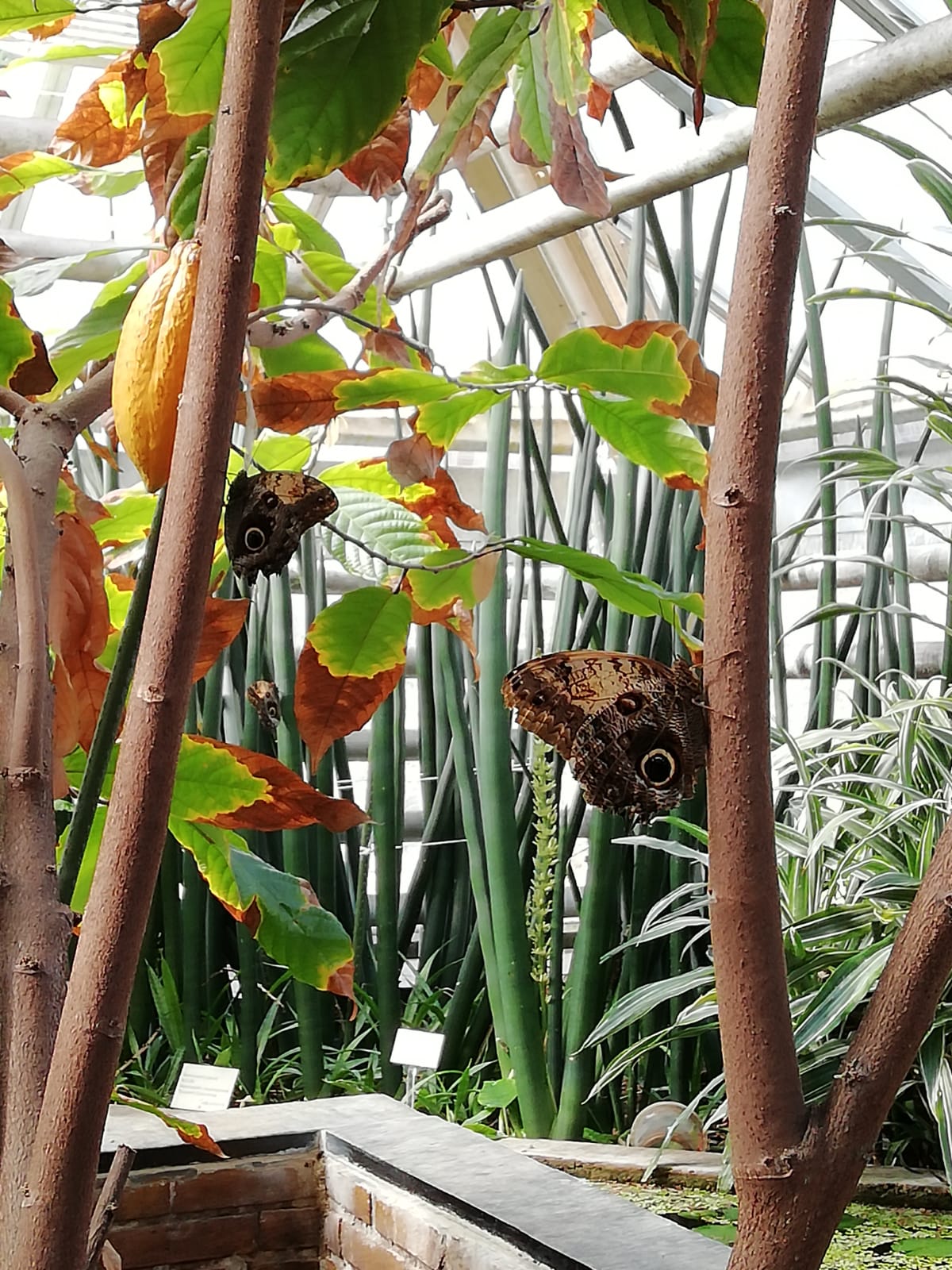 So far this report has highlighted some of the main themes and central questions of the conference. Still, there is more to unpack if you want to go in depth with the presentations. You can check out the conference’s Facebook and Twitter for more information about the presenters and their topics.

All conference presenters are invited to submit an extended version of their paper for publication in the Journal of the LUCAS Graduate Conference, an annual, open-access, peer-reviewed journal managed by an editorial board consisting of LUCAS PhD students. Issue 7, entitled “Landscape, Projections and Transformation”. 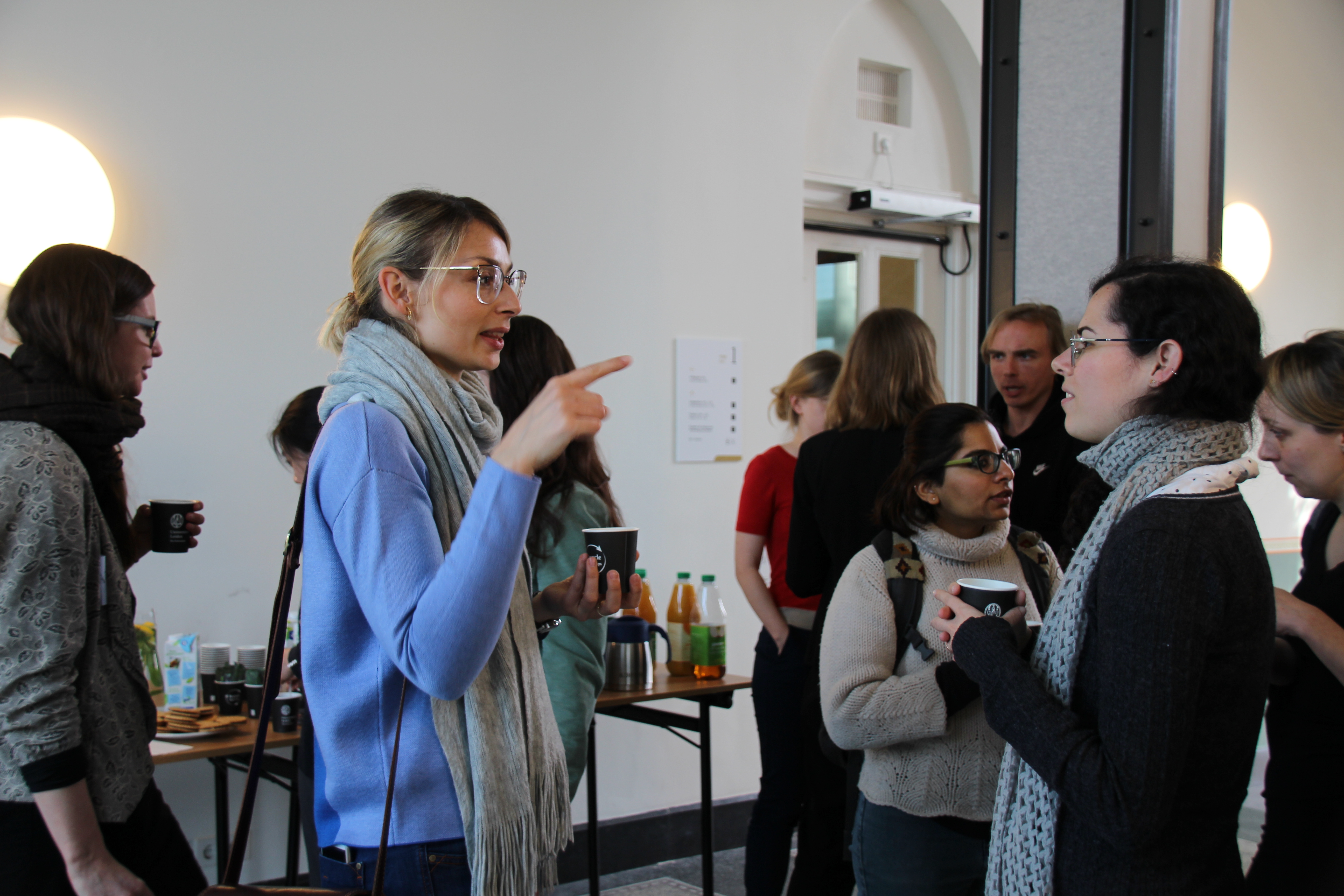 © Lisanne Wepler, Jiyu Zhang and Leiden Arts in Society Blog, 2019. Unauthorised use and/or duplication of this material without express and written permission from this site’s author and/or owner is strictly prohibited. Excerpts and links may be used, provided that full and clear credit is given to the author and Leiden Arts in Society Blog with appropriate and specific direction to the original content.

Thanks for having us, it was an amazing conference!