The Frankfurt Book Fair, held annually in October, always makes for press headlines - especially in 2016, with the Netherlands and Flanders as guests of honour. But did you know that over five hundred years of history have shaped this book industry event?

Book lovers must have noticed, and even for the not-so-avid reader, it was hard to miss: the 2016 Frankfurt Book Fair took place last week (19-23 October), with Flanders and the Netherlands as its honorary guests. Dutch newspapers provided broad coverage, albeit from admittedly fairly random angles: on the many VIP guests (among whom the kings of the Netherlands and Belgium); or on the literary authors’ organized train journey in. International press reports featured an equally broad range of topics: from political statements at the fair to a significant new illustration award.

As this broad coverage implies, the Frankfurt Book Fair is the biggest and arguably most important event in its kind. It typically covers almost 300,000 square metres (for comparison: that’s roughly fifty soccer fields!) in eight different halls with the booths of 7,100 exhibitors from over a hundred countries; besides these permanently manned stalls, the Fair hosts 4,000 lectures, debates, panels, presentations, award ceremonies and other events. It attracts around 275,000 visitors, among whom 10,000 accredited journalists (read more on the FBF Home Page). However, contrary to the romantic image that springs to mind, this Book Fair isn’t held to sell books to fans looking for bargains; in fact, eager readers looking to spend their savings aren’t even allowed in – except on the weekend, when business is already over. Instead of a consumers’ day out, this fair is an industry event with a long and interesting history.

It was only 45 kilometers west of Frankfurt, in Mainz, that Johannes Gutenberg invented printing with moveable type around 1450. By that time, Frankfurt was already a very important trade hub: twice a year, merchants convened from all over Europe, to deal in important bulk goods as grain and fish, but also in more expensive trade like horses, spices, and cloth. Although there were no printers in the town until around 1530 (curiously enough!), records show that the fair of 1478 already featured printer-booksellers – those jobs had not diversified yet. In 1498, the firm of Aldus Manutius, then the most famous printer from Venice, was represented at the fair; Dutch and French printers must have joined around the same time.

In the sixteenth century, book trade at the fair became intensively concentrated in one particular area, the ‘Büchergasse’, ‘Book street’, between the river Main and Leonard’s church. From the mid-sixteenth century, publishers started announcing their titles for sale, in Fair Catalogues (see img.)– these are now invaluable for historical research on the book trade. By combining catalogues with archival trade records, book historians estimate that up to a hundred booksellers from various countries set up shop, and together supplied up to 20,000 different book titles for sale during that week; most in Latin and German. 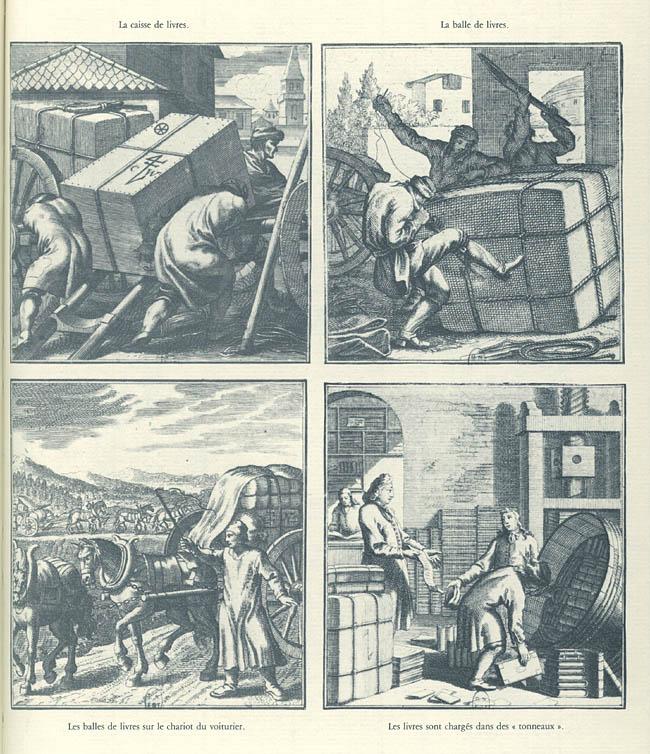 Keep in mind (as seen above) that books had to be transported by cart or barge; they were not bound, but packed as loose stacks of paper in large barrels, which allowed for rolling instead of lifting, and kept humidity – books’ worst enemy! – out, at least most of the time. Printers coming in brought their own stock and sometimes that of local colleagues who couldn’t go; they traded books for books, and thus left with equally heavy loads as they had brought in. Moreover, printers could also buy high-quality paper, and printing materials, such as ink, and matrices for casting type.

In the seventeenth century, however, the Frankfurt region was heavily affected by the German Thirty Years War; heavy conflicts following the Reformation caused an economic downturn and therefore a collapse in international trade in the area. Especially non-Catholic printers started avoiding the Frankfurt Fair, and gradually moved their trade to Leipzig, about 400 kilometers further east, and outspoken Protestant. Book trade in Leipzig was, however, more catered to the northern markets: German, Dutch, Swedish and occasional Russian titles were sold, but contacts with the rest of the world were much less intensive.

After World War II and the division of Germany in East and West, the publishers and booksellers of the western Bundesrepublik lost access to eastern Leipzig. They chose Frankfurt as the meeting point to welcome their international trade partners back, in 1949. Its first edition attracted 205 exhibitors, and featured around 8400 titles for 14,000 visitors – quite an event, but about twenty times smaller than it is today!

In comparison to the ‘old’ Book Fair, the current fair is much more diversified: whereas the early-modern printers produced anything, from religious books, to scholarship, to popular works in Latin and the vernaculars, current publishing houses specialize in a particular type of book and thus a particular type of trade. That means producers of academic works, for instance, hardly mingle with, say, children’s book publishers at the Fair: they are housed in different halls, so far apart that visitors can take trolley shuttles to get there. As mentioned before, at the current Fair, there is no trade in actual books: rather, deals are made around, for instance, translation rights, international library services, or for the acquisition of entire companies by other publishers.

Strikingly, some publishers don’t even bring books anymore. Others freely admit that they could do all their business online, from their home office. However, the international character of the Frankfurt Book Fair, combined with its massive scale and the flurry of activity, renders it an event they still find worthy of attending. For me, as a junior scholar in publishing studies, the Fair is a reminder of the long history of the book in Europe – and the fact that this shared history shaped the ‘world of the book’ as we know it today.